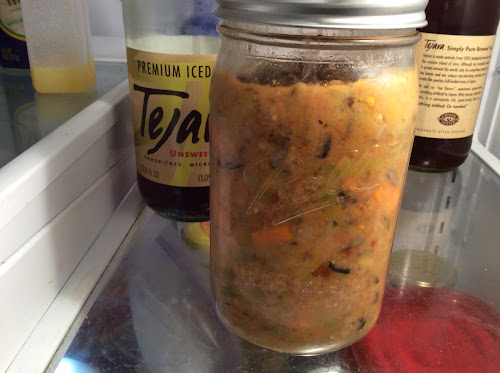 I coud have called this one, "Leftovers Soup." I literally pulled a bunch of random things I had in the fridge and made soup out of them. I didn't get a shot of this soup in the pot or in a bowl, so I thought I'd show you how I store it.

I love quart canning jars! You know exactly how much is in each one, the lid seals snugly, you can see what is in each one, they don't take up as much room as a bowl or pot, the glass holds no residual odors or stains. And they are pretty cheap! Each time I make a soup, it ends up filling most of two quart jars. One for tonight, one for leftovers.

I started with a half pound of hot and spicy turkey sausage. I fried it up, crumbled, and then added chicken broth, julienned sweet potatoes, some canned corn, sliced zucchini, and... I'm not sure I remember all of it. Maybe some pre-blanched green beans. When it was cooked and heated through, I sprinkled a few tablespoons of seasoned dry breadcrumbs (like Progresso, but store brand) to give it a little body. But the result was... delicious! And it was all because of the sausage! Just to eat highly seasoned sausage plain can be a little intense, or maybe not set well on the stomach. But using it in soup causes a wonderful rich, spicy flavor.

I wasn't expecting much out of this one, perhaps even tossing the leftovers. But we ended up eating all of it, it was so good!

Posted with Blogsy
Posted by Carolyn at 4:35 PM