Six Things I could not, would not eat... 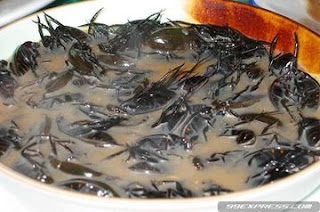 (Scorpion Soup- not currently on my list because this dish had never occured to me before, therefore wasn't lurking in my mind. I ran across this most revolting photograph on the web)
OK, Who really knows what one could manage to choke down if one were starving? I’ve never been starving. I’ve never even been really hungry, I mean really hungry. So if ever I were in that position, I suppose I may have to eat my words. But gladly. I think I could even eat crow before I could eat, well, lets just have the list now, shall we?

Before I begin, I must admit that there are some awful things that people around the world eat that I wouldn’t even know about unless I started digging around for “weird, unusual things people eat.” (try the Google search yourself!) But I’m not counting it unless it was something I already knew about and had already put on my bad boy list.

6) Termites. We could just expand this to include all bugs. In fact, I could happily expand it outward to include all insects, spiders, ticks, caterpillars—in short, things with an indecent number of legs. But it is termites I can’t get out of my head. Years ago, I saw a National Geographic article on termites that had a big color picture of village folks frying up a mess of winged termites over cook fires. Crispy brown with wings sticking up all over in a big black frying pan. No thanks.

5) Shark Fin Soup. I’d never heard of it before I found a recipe in a Chinese cookbook I’d gotten as a gift. Two whole pages were devoted to the preparation of the fin. The picture of the finished dish showed a big white bowl with a single meaty lump wallowing in a clear yellow broth. Yawn. Later, when I read accounts of how sharks were “finned” to obtain the necessary ingredient, I was repulsed. Never!

4) Brains. My dad would sometimes hanker for exotic things to eat. Various organ meats showed up at disturbing intervals, coincidentally when we kids happened to not be very hungry. Brains were the hardest item to wrap my mind around eating. One day, I couldn’t get out of it and allowed a small portion of scrambled Brains ‘n Eggs on my plate. Okaaaay… it was edible. But… Thankfully, with Mad Cow disease, I don’t have to come up with a polite way of saying, “No thank you, really!”

3) Dog Food. Wait! you say. I thought we were talking about regular people food! Yes, we are, but this one is allowed because I used to eat it when I was a kid. Yum! Just opening a can and smelling it brings my childhood back. Because it was cheap, we used to buy Skippy brand canned dog food for our dog. When we opened each end and pushed the food through, we’d slice off a half inch with a butter knife and nibble on it. Sometimes we’d get lectured because we weren’t leaving enough for the dog. I can still hear our shrill little voices, “Mama! Your meatloaf is good! It tastes like dog food!” Gag.

2) Yak Butter Tea. Yes, I know it is highly unlikely that I will ever be put in the position of having to drink this particular poison, but when you have read the National Geographic as long as I have, anything seems possible in this world. For some reason I can really imagine how this must taste—salty tea with rancid yak butter blobs floating around in it. Congealing even as we speak.

1) Corn Smuts. Yes, smut. Have you ever seen a corn smut? Some years ago when I was raising a few rows of sweet corn, I pulled back the husks to find the invasion of the body snatchers. Instead of rows of demure pale yellow kernels grew huge grotesque gray-purple tumors, wallowing all over the end of the ear. I couldn’t throw it fast or far enough. I didn’t know what it was until I watched a TV show featuring a man traveling around in Mexico, eating various indigenous food items. One strange item was called huitlacoche, which turned out to be young corn smuts stir-fried and served up in a tortilla. Supposedly, it is a delicacy, and folks have been trying to bring this fungus to American and European diets, but with little success. You can see why, if you look on Wikipedia and see the pictures. I don’t know which is ickier, the life-size or the microscopic view. 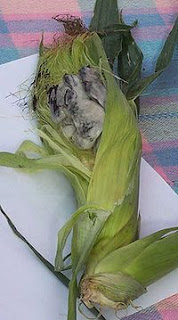 What is your list like? What makes a thing hard to eat; the taste, texture, or is it just the thought of it? Does your conscience play a role? What intriguing things do you eat that others would put on their lists?
Posted by Carolyn at 10:02 AM 4 comments: