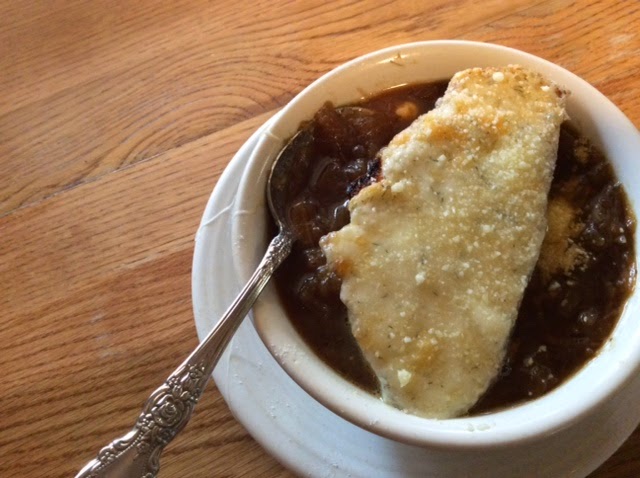 I've made this recipe before, and it is the best French Onion Soup I have ever had. It comes from Cook's Illustrated. They have made an alternate cooking method that doesn't take as long, but if you want the best soup, the long-cooking original is the one to make.

I have a great little cast iron bean pot; it is one of the older made ones, smooth as glass inside, well-seasoned, and the perfect size. It takes about four pounds of onions (use the regular yellow ones or the white ones, not the "sweet varieties") sliced thin. They bake (with a pat of butter), covered, for an hour at 400 degrees. Then stir, tip the lid a little and bake for another hour and a half. They will be pretty caramelly looking by then. Put them on the stovetop and cook them on medium, stirring often. Every time they start getting crusty on the bottom, add a fourth cup of water to stir it up into the mixture. After about 3 or 4 times of this, you are supposed to add some sherry. I never have sherry, so I stir in about a half cup of dry white wine. After you cook the alcohol off, you add a quart of chicken broth, a pint of beef broth, and a pint of water. I didn't have fresh thyme like it called for, so I put in a couple pinches of dry thyme. And a bay leaf. Simmer for about 20 minutes or so and then it's done!

The way you are really supposed to serve it is to lay a chunk of bread on the soup, grate cheese on it, then stick the whole bowl under the broiler. I usually just put a piece of bread on a foil, slice some cheese on it, and then broil that. Then I plop the whole thing on top of the soup.

Cork is not fond of soggy bread (ok, so he hates soggy bread), so his is served to the side. His loss!

You just can't imagine how good onion soup can taste!
Posted by Carolyn at 6:19 PM