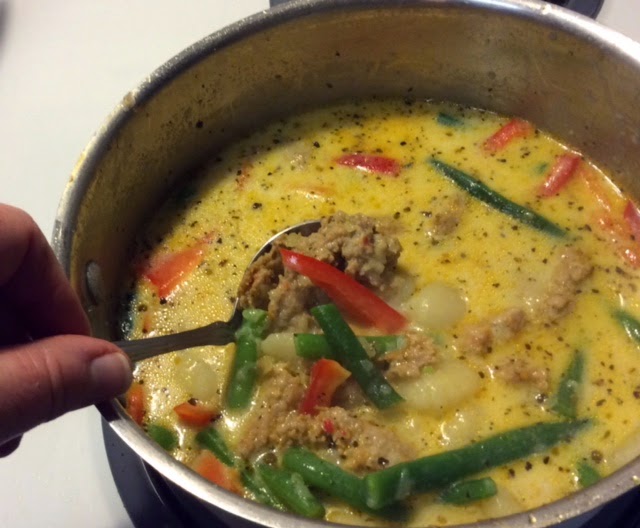 Cork likes thick hearty soups. I'm just as happy with thinner soups with lots of broth. My soup-making goal is to have a bit of both, when I can. I got the idea of this one from a lentil soup he had at Mary's Pizza Shack the other day. It had Italian sausage in it, but not very much. And he mentioned that it wasn't very spicy. Well I know how to fix that! HOT Italian sausage. We have been enamored of gnocchi since I discovered it in the Olive Garden soup, but I wanted something a little less cream-based.

In case you don't know gnocchi, they are these addictive little potato dumplings that come from Italy in plastic, shrink-wrapped, shelf-stable packages. I've tried the fresh ones from Safeway, but they just don't cut it for me.

I used a half pound of hot Italian Sausage, frying it in the saucepan. It was low-fat turkey or chicken, but still tasty and not so greasy. It stuck to the bottom of the pot, but that was ok, because the broth would loosen it. I poured in about 3 cups or so of "lazy man's chicken stock," that is, water and "Better than Bouillon" chicken bouillon. To give it a thicker mouth-feel, I grated half a potato into the liquid, and then simmered it until the potato was soft. I also added some shakes of garlic powder and about a teaspoon of Italian seasoning.

Meanwhile, I cooked the gnocchi in a separate pot. When I was happy with the flavor and consistency of the soup, I added the gnocch, about half the package, and poured in a cup of whole milk. I tossed in a handful of chopped red bell peppers and pre-blanched green beans. The lid went on and the burner got turned down to a very low setting.

About five or ten minutes later, dinner was served! Green salad and fresh fruit with yogurt completed the meal.

I was quite pleased with the results, and I think Cork gave it an "A" also.