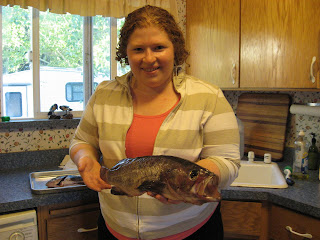 Last week my husband went deep sea fishing up the Northern California coast. I’ve always thought it would be great fun to have a whole pile of fish to play around with, and I got my wish. Alas, no salmon! But he did catch his limit (10) of these plain-looking, tasty blackish-grayish fish. He brought home 8 of them already filleted, but left 2 of them whole, for barbequing.

It is sort of amazing how much of a fish is its head. And you can’t cheat and cut a little higher on the neck to add a little more meat on the carcass. There’s a bony thing right behind the gills that you have to go past to cut. You can angle it up a little, but not much. So there is this great big fish head with a little wad of meat still on it right behind the brain. The thrifty part of me was screaming “Fish soup!” But the practical part of me was looking at all the fish meat I had on the counter and, thankfully, beat that idea down.

I stashed the bag of fillets in the ‘fridge and concentrated on the carcasses. I got the briquettes started and then sliced the bodies in thick steaks. I ended up with 5 pieces, and coated them with lemon pepper. I decided that now would be a good time to try out those split apple wood pieces that have been drying, so I laid a couple on the coals for smoke.

After a few minutes on the hot part of the coals, I moved them off to the side to cook more slowly and indirectly. I guess they took about a half hour. Very successful! They were tender, moist, smoky and delicious. The apple wood makes a nice mild smoke flavor. 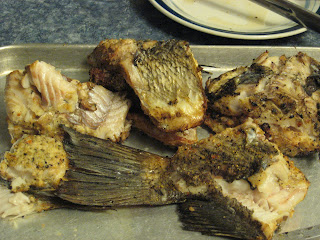 My next try was breaded and fried for breakfast the next morning. They were very good too, moist and flavorful. The only issue was that we have become unused to breaded and fried things, so there was a lot of *burp!* excuse me!

That evening (you are witnessing fish-immersion here) I tried some fillets out in my Camerons stove top smoker. It did so well with some salmon previously, but these ended up dry to my tastes. Could be because I left them in too long, or because the salmon had more fat… But the family thought they were fine.

The last 3 fillets went back out to the barbeque the next evening. To keep them from falling apart, I laid them on a bed of sliced bacon. So you know they will be good! I thought my husband might be getting weary of fish by now, so I grilled up some lamb steaks for him. And what the heck? I laid bacon over them too! (Bacon is very good in the barbeque!)

This morning I had the last of the fish leftovers for breakfast.
I guess I’ve had enough of fish for now, but I’ll be looking at recipes for the next time!
Posted by Carolyn at 3:23 PM No comments: 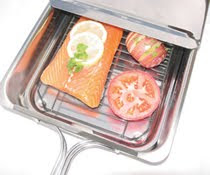 I’ve been having fun with my new kitchen toy, a stovetop smoker.

What I love about thrift stores is that you never know what you’re going to come across. The strategy I use is to have a short list in my head of things that I’m keeping an eye out for, but be open to something totally unexpected. At Goodwill, a few days ago, I found a Camerons Stovetop Smoker still in the box unused, with all the cups of wood chips and instruction manual still there. I got it for $8. List price is $50.

At first I’d been thinking it would replace a smoker like those Little Chief smokers, but then I realized it’s more of a cooker that makes your food nice and smoky. It is nice heavy-duty stainless steel and very easy to use for all types of food.

Here’s how it works: The pan is set up in layers. In the bottom of the pan you make a small pile of the wood chips, then set the drip pan down there. The rack goes on the drip pan, the food on the rack, and then the cover slides across the top. You set the stove burner to medium, and presently the chips begin to smolder, the pan heats up inside, and the food cooks. Any stray wisps of smoke go up the hood vent turned on low.

So far, I have done a pan of thick sliced potatoes, salmon fillets, and homemade chicken sausage. The salmon turned out the best. It was moist and smoky-flavored. Cold, it makes an EXCELLENT addition to a salad. The potatoes were nice, but next time I’ll slice them a little thinner and maybe add some liquid to the drip pan to add moisture. The sausages taste lovely and smoky, but I needed to leave them in long enough to get maximum smoke flavor which left them a little drier than I would have preferred. But a ground patty would take in the smoke in fast order, so maybe I’ll try that next time.

One fun part of this kit is the 4 little cups of chips. I knew I liked hickory, but didn’t know about the rest of the varieties. I’ve used alder and oak so far, and am anxious to try the cherry.
Posted by Carolyn at 9:16 AM No comments:

Desserts I have known and loved... Baby Cakes! 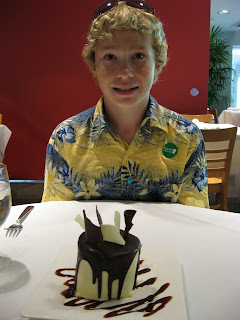 Maybe because I am in a low calorie eating frame of mind lately that my thoughts have turned to… Dessert!

I’ve been thinking over past desserts, enjoying their experience from a distance, and seeing them pop back into my life once in a while in the future. So I thought I’d ruminate on a few more memorable ones and post them here. I want to start with a Baby Cake.

A few years ago, we traveled to Arizona for a conference my husband wanted to attend. It was in Phoenix. There happens to be a nice art museum in Phoenix, which was lovely, as I enjoy art museums. My son was a nice companion, and we had a jolly time.

The experience reminded me of how we fix good times and new, fun experiences in our minds. Saturate it with all the sensory stimulus you can; sight, taste, touch, smell, hearing. These are the keys to remembering and enjoying those times again, even after they have long past.
Posted by Carolyn at 9:06 AM No comments:

I haven’t been posting for a little while because I have been busy with my other blog that Melinda and I have been setting up, Project Newbery Award. Our goal is to read and review all the Newbery Award books and some of the Honor books.

So, being of a rather bookish frame of mind, I decided to scan my books and see if one made a particular food pop into my mind. One did. When I saw “Two Against the North,” by Farley Mowat, I instantly thought of Pemmican.

Pg. 108 and 109: “…wizened little berries,…partly dried. The drying process was completed over the fire so the berries would not ferment later on. … mixed them with ground-up deermeat (that they had pulverized between two stones) and with boiling hot deer fat. This rather sickening-looking mixture was then poured out to cool in slabs, and the slabs carefully wrapped...”

It didn’t matter, the word “sickening-looking.” I just skimmed right over that. It sounded COOL! The perfect trail food. In my mind, it was not a greasy, mouth-coating, fibrous hunk peppered with sour bits. It was a cross between…

Have you ever had a “peanut patty?” It is an old-fashion candy that is shaped into a round, flat little pat. The sweet matrix is a soft, translucent, pink material that holds shelled peanuts in a nubby suspension. I was never all that fond of them, but they were sure cute, and I could appreciate their novel make up.

What was much better was a Cadbury “Fruit and Nut Bar.” As far as I knew, they only came family-size, which was good because we always got one as a family. The big milk chocolate slab was scored into small squares for breaking off individual pieces. Nuts and raisins were embedded in the chocolate. With one nice bite, you got the sweet chocolate, the tangy-sweet raisins, and the rich, crunchy nuts.

So I just couldn’t shake the feeling that pemmican was a cross between a Peanut Patty and a Cadbury Fruit and Nut Bar. And what is strange is that even now, I have a hard time imagining that pemmican isn’t a tasty treat. Maybe it’s partly the name. Pemmican. When you say it, it makes you sound like an insider. Like an experienced wilderness adventurer. Maybe it should be called “Rancid Lard and Protein Slabs.”

To keep my fantasy intact, I shall have to come up with my own pemmican recipe. Stay tuned!
Posted by Carolyn at 9:43 PM No comments: