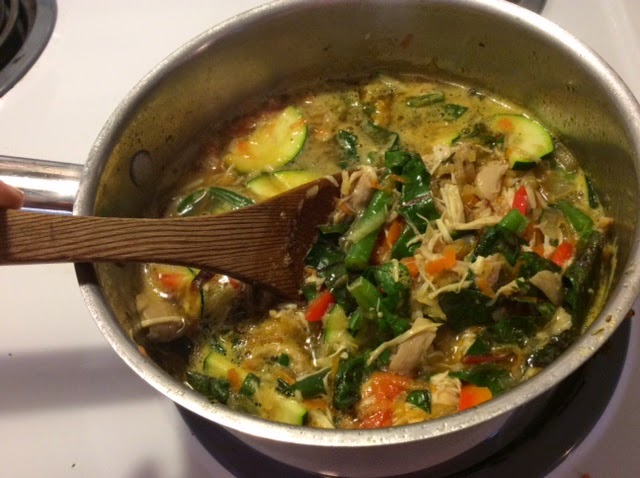 I made this soup early in the day today to put in the refrigerator for dinner tonight.

I had braised a chicken in the crock pot the other day and deboned it for future soup use.I ended up using about half the meat for this one, and the other half will go into a future soup, perhaps.

I wanted this one chock-full of vegetables with little starch. The only starchy food in it is a half of a shredded potato, to give the broth more texture and richness. I also decided to shred a carrot into it also. I know that carrots are good for you, but I'm not terribly fond of them as a chunk, raw or cooked.

I started with a few tablespoons of diced onions sauteed in butter. I used butter instead of oil so I could get some nice browning. I cooked the onions until they were a little crispy and caramelized at the edges. I sort of like that look, though others like to keep them on the invisible side in their soups. I dumped in the pint of broth that I had saved from the crockpot chicken, and then added another pint of water. I was out of my favorite bouillon (Better than Bouillon) so I used my back-up dry powder stuff for the saltiness and a bit more chicken flavor. (I rely on spell check for the B word, but its getting tiring to go back and let it correct itself. Maybe I'll just make up my own word for the B stuff...)

I simmered it until the shreds were done, and then added my spice. I was sparing with the tarragon, since it can be quite overpowering. I used maybe a teaspoon at the most. A fair amount of granulated garlic and a squirt of lemon juice went in. I added a pinch of thyme to calm down the tarragon and add a little complexity. I added about another cup of water to account for evaporation and to dilute the seasoning.

Into the pot went a couple handfuls of chicken meat, some pre-blanched green beans, some sliced zucchini, and a some sliced red bell pepper. I also put in a big handful of Swiss chard.

Swiss chard is a great leafy green vegetable for soups. It stands up well to the heat, keeping its shape instead of dissolving into mush, like spinach leaves. The only thing is, you do HAVE to cook it, at least 5 minutes or more, or else it isn't tender enough to be enjoyable. I should have put the chard in earlier so that I didn't have to cook the other vegetables as long. I had wanted them to be a little more crisp-tender. So I ended up compromising between the two extremes. The chard is a little more substantial and the veggies a little more soft than I would have chosen. But I think it will still be ok.

We shall see when we have it tonight!
Posted by Carolyn at 10:03 AM