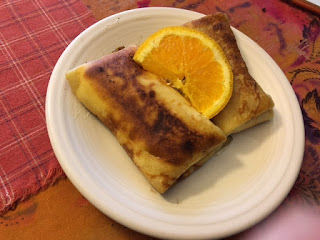 Ever since I had a delicious French Toast Cheese Blintz casserole at my friend's house, I wanted to see what actual Cheese Blintzes were like. I've never had them and never made them. And I knew I wouldn't be able to get them out of my mind until I tried my hand at it.

One of my go-to recipe sites for those categories of food, i.e. Mediterranean, Jewish, Mid-Eastern, is Tori Avey's. I've never been disappointed. She had a few versions, all similar, but this one looked good, since I do like citrus and orange flavors. These were Citrus Vanilla Blintzes.

In preparation for making them, I bought a package of cream cheese and a carton of Ricotta cheese. I'm not crazy about Ricotta, and had thought about substituting drained cottage cheese, but the regular blintz recipe I had in mind (on her site) suggested that it might not come out the same. The next day, when I searched for the recipe again, I saw a new entry, Citrus Vanilla Blintzes! Now THAT sounded really good! Turns out, she now has Clover Dairy as one of her sponsors, and created the recipe with Clover cottage cheese instead of ricotta. So I got to use the cottage cheese in my fridge (Crystal brand) and leave the ricotta sealed up for future lasagne.

Reading through the recipe, I realized that it was mostly identical to her other blintz recipe, only with a splash of orange juice and a bit of vanilla. I didn't need to make up the crepe batter, since I already had a cup of leftover batter in the fridge from making dinner crepes. I just dropped in a little orange zest to help the flavor along.

I halved the recipe, since this was really just a test run for one- me.  Of course the cottage cheese didn't want to get smooth with a whisk, and I didn't want to dirty up the processor for just a bit of batter, so I pulled out the immersion blender and made short work of the lumps. I had just enough crepe batter for two crepes, so I cooked them up and set them aside while I put a piece of butter in the hot pan. They were surprisingly easy to assemble. Crepes are so flexible, yet sturdy. The filling was thick enough to stay put, and the blintzes did not unwrap themselves when I fried them. Towards the end, the filling wanted to ooze out of some small cracks, but that was about when they were supposed to be done anyway.

They were indeed very tasty. Lightly sweet with a light orange flavor, and rich with the vanilla. The crepes lose any crunchiness very quickly, so if you want that, you need to start munching right away. But I did find myself wondering, after a couple bites, why in the world would this be considered breakfast food? I guess the same reason people eat muffins (aka cupcakes) sweet rolls, bread drenched in butter and syrup, and Lucky Charms for breakfast. I actually find that an egg and a glass of milk are a better breakfast meal for me. But I digress.

So what do I think? Will I make them again? Were they worth the trouble? Considering how very like cheesecake they were, and that I like cheesecake better, I would probably pick that option first. The fact that they don't likely hold over well is a strike against them. One would make them up as their hungry customers held plates out near the skillet. Which would be sort of ok, since they are kind of fun to make once you have the components all prepared.

I'm thinking the next thing I'll try is that breakfast casserole my friend made. It was more complex in the flavors, and it had a lot more egg in it, which makes it more nutritious.

I'm not going to write out the recipe, but you can click on the links and go to her site, which has very nice photos and interesting comment on the food.