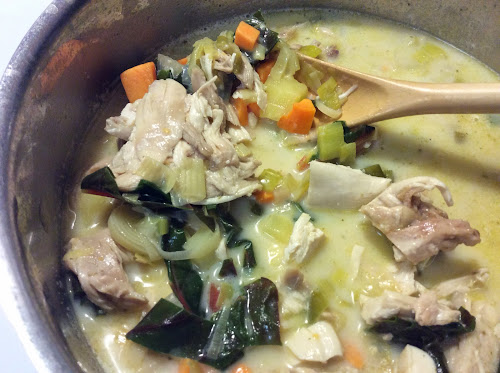 Ok, I'll admit it, I like to say the name of the soup even better than I like to eat it. It is Irish, I think. Cock meaning chicken, Leekie, meaning leeks. The first time I even really heard of leeks was when I got an international cookbook for a Christmas present and saw a recipe for it. I don't actually follow that old recipe, rather I do what I usually do, remember in general how it goes together and then start ad-libbing.

Leeks are like overgrown mutant green onions. They have fat, thick stalks with fleshy green leaves that have usually been trimmed before you get them. They are usually grown in silty soil, which gets all on them and in them, so they have to be washed very well. When you select them, remember that it is the thick white and light green stalk that gets used, so pass up the shorter ones with abundant green leaves in favor of the thick, heavy white stems.

Wash leeks by trimming off the dark green top and then slicing vertically down from the top to within a couple inches of the root end, and then turning the stalk a quarter turn and doing it again. Plunge in a bowl of water and swish vigorously, getting all the grits out.

Slice them across and then saute in butter. Don't brown them, just get them nice and soft. Chicken broth and a diced potatoe go in next. (It's Irish, remember?) I went ahead and threw in a diced sweet potato for the nutrition and visual interest. For a little extra, I added Swiss Chard about 10 minutes before I wanted it to be done. Then I began to fine tune the seasoning. A daub of Pesto, garlic powder, a squirt of lemon juice is all I think I added. Then I gently stirred my pre-cooked chicken in. It was already falling apart, and I wanted some chunks to remain. If I had sauteed raw chicken pieces at the beginning, they would already be in there, becoming tender and cooked. The last part was a generous splash of milk. Make sure the soup is hearty enough to not be thinned out too much by adding milk.

Be aware, Leeks are sweet! In fact, once you cook them, all onions become more or less sweet. That is one reason I like the bit of lemon juice with it. It seems to balance it all out.

This soup was mild and delicately seasoned, which means that my husband had to add pepper and hot chili oil, but I liked it with just a plop of greek yogurt dropped into my bowl.

Posted with Blogsy
Posted by Carolyn at 9:30 AM