The Best Ever Lettuce Keeper

There are many ways to try to keep lettuce nice for several days in the 'fridge. When I buy "floppy greens," I like to get them in the plastic clamshells if I'm going to be dipping out of it over the week. Many years ago, I had a Tupperware brand Iceberg lettuce bowl. It was rounded, with a domed lid that snapped on over the top. It was ok, but it was sort of tall, and didn't seem to fit well in some of the shelves, plus you couldn't stick anything on top of it. And since the lettuce went down in the bowl, you always felt you had to wash it after use, even if it seemed clean. It was expensive.

Sometimes I use plastic twist-tie "bread sacks" for my cleaned lettuce. But a head of iceberg is just a bit too big, and sliding romain in and out isn't as nice as all that. There is always some moisture, and you don't want the leaves lying in that.

And then I had the serendipity of finishing the last piece of a grocery store bakery cake at the same time I was looking for something to put my head of lettuce in. 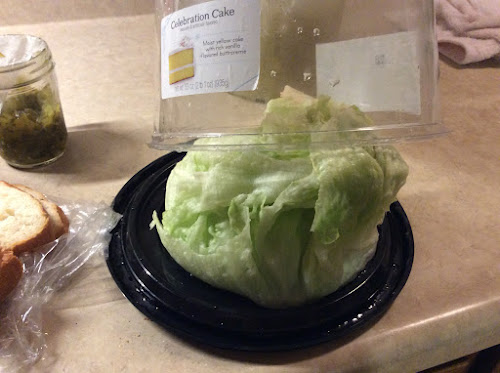 I'm telling you, it couldn't be more perfect! The groves in the bottom piece collect moisture and keep it off the leaves. It's like a little terrarium, keeping the atmosphere damp enough to keep the leaves crisp. There seems to be a lot less browning of the cut ends too. The size is perfect, the lid snaps on securely enough, but pops right off when you work it. You can stash a small plate on top if you need to, and the dome never touches the lettuce inside. And it's free, if you buy a cake! A good reason to buy cake. If you need one.

Posted with Blogsy
Posted by Carolyn at 11:16 AM 1 comment:

I am going to postpone more "Masters of the Grill" blog entries until I have my winter grill set-up accomplished. Until then, I think I will turn my attention to Savory Soups and Succulent Sandwiches.

What is your favorite sandwich?

When I was a kid, we used to stop by the little grocery on the way home from church and buy stuff for lunch. Usually, that was a loaf of bread, a pound of bologna from the meat counter, a quart bottle of Pepsi, a bag of mini-tacos (bygone tortilla chips), a foil pack of French onion dip mix, a carton of sour cream, a package of cookies (either Hey Days, Nut Goodies, Lorna Doone, striped shortbread, or Mother's Iced Oatmeal), and the Sunday edition of the Fresno Bee, with the color comics. I used to make a sandwich with two slices of white bread, mustard, a slice of Bologna, and a layer of chips pressed next to the bologna.

Probably the best thing that ever happened to me and sandwiches is my discovery of Real Mayonnaise. I used to think Miracle Whip was mayo, and I didn't like it. I thought it tasted sickly. And then when I had my first mayo, it was like an angel choir sang! I dumped mustard and took to slathering mayonnaise on everything.

But, back to judging what the Best Sandwich Ever could be. And one contender, that is somewhat lowly, but is sublime, is the Bacon, Lettuce, and Tomato Sandwich. 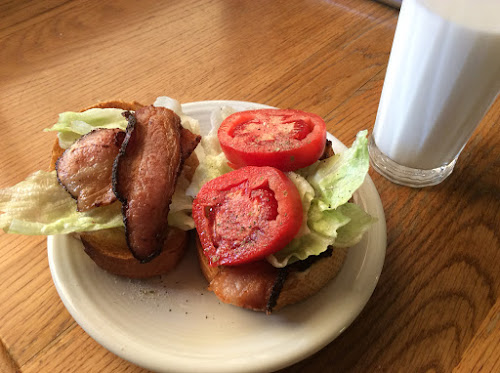 I know that lots of people start adding extra stuff, like pickles and cheese, to this little masterpiece, but I say, Nay! It is perfect the way it is. And yes, that is iceberg lettuce. I went the floppy greens route, sneering at that "tasteless iceberg" for many years, until I realized I was just being a snob, and that I really did like iceberg lettuce, the mild flavor and the great big crunch.

I used center-cut, thick, peppered bacon, but it really doesn't matter all that much what type of bacon you use. Bacon is good. All bacon is good. Bacon is the King of Meat. Bacon makes everything else taste better. Unless it is rancid. When we bought a pound of bacon, when I was a kid, we COOKED that bacon! We fried that bacon up! Maybe if only one person was eating, a few pieces would be left in the package for a pot of beans the next day, but there was no such thing as leftover bacon from one shopping trip to the next. My grandmother, however, hoarded her bacon. When we stayed over, and we were to be blessed with bacon and eggs, or a BLT, the flat package would come out of the meat drawer, opened up, and one or two thin pieces would be carefully peeled off and laid to fry in the black cast iron skillet. It might be several weeks, a month, or more when the bacon came out again. I began to notice that Grandma's bacon had a different flavor than our bacon. More, well, oldish tasting. Mom suggested that it might be "rancid." Although the bacon didn't taste nice, the word did, and I relished adding it to my vocabulary.

It is a sad day when you have used up the last one of your homegrown tomatoes, because that is the last day that you can make a BLT. It is too much a waste to go to the effort when the tomatoes are less than homegrown-good. Summer's tomatoes, straight from the vine to the cutting board are required. I like to get about two thick slices out of an average size tomato, red, juicy, and exploding with acid-sweetness, lightly salted with kosher salt. Also needed, a big napkin for the juiciness and a fork for getting the pieces that fall out.

I think I lean towards sourdough bread for a BLT. Usually, I just have part of a sourdough french loaf from the day before, so I cut a couple of round pieces off the end, thicker or thinner, depending on my hunger level. And then I treat the bread specially for my tastes. I toast one side very lightly. That is the outside. I toast one side darkly. That is the inside. I like crunchy toast, but if it's one the outside, it scrapes the inside of my mouth.

So there you have it! What do you think? How do you make a BLT?

Posted with Blogsy
Posted by Carolyn at 12:04 PM 1 comment: