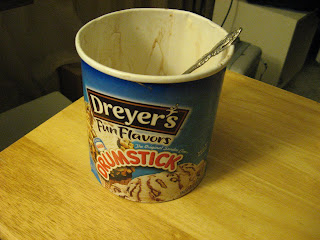 Somewhere in the process of eating most of a carton of Dreyer's Drumstick flavor ice cream, the last of it right out of the box with a long handled ice-tea spoon, I started thinking about how very many flavors of ice cream there are out there. Dare I say, almost too many?

If the purpose of having so many flavors out there is to make it easier to find just the right one you want, it has dismally failed. It is far harder to make a decision on a carton of ice cream than it ever was back in the 60's and 70's when I was a kid.

In grammar school, the 8th grade class sold ice-cream cones at lunch time to raise money for their annual school trip. They served chocolate (what I always got) strawberry (now that is just strange!) and vanilla (why anyone would choose a non-flavor like white vanilla when they could have chocolate was beyond me!) for a nickel a scoop. I didn't even have to think about it.

At the stores, there were only a couple of brands to look at. And the flavors were pretty straighforward. Vanilla, Chocolate and Strawberry, and then what we usually got, Neopolitan, which was vanilla, chocolate and strawberry all in one carton. You could carefully scoop the flavors separately and make a banana split look like the ones from Woolworth's.

My grandmother always had Maple-Nut in her freezer. I wasn't crazy about it; if I had a choice I always picked a piece of one of her ice-cream pies she kept in there. Then along came an exotic flavor: Butter Brickle. It was a buttery flavor with little pieces of toffee things floating around in it. When it was fresh it was great. When it was old and had been partially melted at the grocers a time or two, it wasn't so great...

My aunt introduced us to something called Burgundy Cherry. We were already familiar with Cherry Vanilla, which my mom seemed to really like, but this was different. Not that it tasted especially spectacular, but it was very beautiful. Purplish pink with soft burgundy colored cherries in it. Two other flavors that were a staple at our house were Rocky Road and Chocolate Marble.

I think it was the Mint Chip ice cream that heralded a new era of flavors in the grocers case. Cookie Dough followed, and then Strawberry Cheese Cake. Tin Roof Sundae and Mocha Almond Fudge came up close behind. Then it seemed like a free-for-all. Every candy bar made now came in an ice cream version, every combination of chocolate, carmel, nuts, crumbs, peanut butter and coffee you could put together were made and named after various curious phenomena.
It's a proven scientific fact that having more choices makes decision-making harder, not easier, that people are more dissatisfied with their final choice than if they only had a few to pick from.
So now I stand at the frozen section staring at all the brands, all the flavors, and cannot for the life of me pick one. So I pick two. Or three. Just in case I decide the first one wasn't the one I really wanted after all. So maybe they know what they are doing after all.
Posted by Carolyn at 8:24 PM 2 comments:

Wine and Chocolate in Lodi This weekend, Feb 13 and 14 the Lodi Wineries are holding their annual “Wine and Chocolate” tour. My daughter, Melinda and I, having absolutely nothing better to do than go wine and chocolate tasting, ordered our tickets. Can you really think of very much nicer a way to spend a beautiful sunny Saturday than tooling around the rural vineyards and orchards, stopping at posh little wineries nibbling brownies and sipping good Zinfandel?

The first stop was the Lodi Wine Center. Kathleen, my gps, was not behaving well and tried to send us on a wild goose chase, but we wrestled her down and found the place in good time. We collected our wristbands, wine tasting glasses and tin of chocolates. Our designated driver collected his wristband so that he could have cookies and stuff, no wine, but lots of compliments from the servers during the day for his sacrifice. We had an event map that we had highlighted the wineries we didn’t want to miss. This was important, as there were about 40 wineries involved, and none of us really thought we could manage the whole gang in only 5 hours. Since we weren’t local, it was a one day shot for us.

I didn’t know much about Lodi wines, but now I know how important Zinfandel grapes are to the region. Zinfandel seemed to be the predominant wine, followed by Cabernet, Chardonnay, a little Merlot, and some other Spanish grapes that I can’t remember the names of right now. I think I like Zinfandel second only to Cabernet Sauvignon, at least from my limited experiences. We tasted a LOT of Zinfandel, and I was looking for a bottle to buy.

One place we went to, Michael David, was festive; they had souvenirs of Mardi Gras beads and shiny masks. There, I had what was probably the nicest wine up to that point. It was a Zinfandel named “Gluttony,” part of a line-up of their “Seven Deadly Zins.” I would have paid about $25 for it, but unfortunately, it was $60. So I took another taste of it and moved on.

(At this point you might want to read my post about cheap wines, if you haven’t already!)

Sometime during the first few stops on our route, we had the nagging feeling that we had gotten in with the wolf pack and might have to break loose. The limousines were showing up just ahead of us. You know that sinking feeling when you are on a trip, and you need a restroom, burger and drink in that order, but you see that 3 school buses and a tour bus have pulled in the McDonalds just ahead of you? Thankfully, our next stop was a near miss as we had to make an awkward turnaround to go down the poorly marked road. No limo could have made that maneuver, so we were able to drop out of that pack. After that, we had more breathing space.

We really enjoyed seeing how the different winery owners were able to express their other passions within the winery setting. D’art is owned by Dave and Helen Dart. Because he wanted to showcase his beautiful artistic talents as well, he arranged his framed paintings, decorated the facility, and named it D’art, “of the Art.” Harmony Vineyards featured a magnificent built in pipe organ, played live during the day.

Our last stop of the day was a vineyard plaza. About a half dozen wineries had located at a central area in the Lodi area to make a sort of outdoor wine mall. It was there at the Watts winery where I bought my 2cnd bottle of wine. The server was a knowledgeable, very personable young man who was very good at what he did. It made me really understand how important it is for a winery to not just have a warm body to stand there and tip the sip into your glass, but to interact, to tell you with his words and body language, “Isn’t this a great wine?”

We had a great time. A person could probably better do serious wine tasting by limiting the number of wineries and tastes during one day, but for fun, this couldn’t be beat. And I did get 2 bottles of great wine to set aside for the next special occasion!
Posted by Carolyn at 12:02 PM No comments:

If you like chile relleno casserole (and you know who you are), give this a read.

Chile relleno casserole is a great dish to whip up when you are serving a crowd. Layered in a 9 inch square or a 9x13 dish, it is easy to prepare and when it’s done, you have a mellow, cheesy, nutritious meal with most of the food groups represented. But for the single, or the couple, it requires a commitment in the baking, with the amount of cheese to shred and the cooking time, and a commitment to how many days you plan on eating it until it’s gone. You may not know how easy, convenient, and really delectable the original chile relleno really is.

My mother used to make chile rellenos occasionally, though I had never tried to copy them myself. But I remembered what she did when I tried to make them myself the other day. You can make up exactly how many you want at a time. And you can also make extra—they are also nice heated up the next day.

First, you need Ortega chiles. (Ok ok, if you really wanted to do this right, you would buy fresh chiles and fire roast them over flame, sweat them in a bag and rub the blackened skin off. But we are going to live conveniently this time) I just buy the big can in the Mexican food aisle, use them in all kinds of things until the rest go bad and then toss them. I’d rather do that than use those dinky little cans. Pull how many you want out, pour out the liquid from the peppers and lay them on a paper towel to dry off a little. Don’t worry about seeds. When they prepare them for canning, most of the seeds are removed.

Next you need eggs, separated. Here is the best way to handle that. Separate them when they are cold, and then leave them out for a little while until they get closer to room temperature. Cold eggs don’t whip as nicely as tepid ones do. I used 3 eggs for 5 chiles, but you can change those proportions however you like. You can use a mixer, but I prefer to just use a whisk. It feels more homey and organic. Whip the whites until they are in soft peaks. Then whisk the yolks in another little bowl. Fold the yolks into the whites. One thing I like to do is also fold in about a tablespoon of masa flour or fine cornmeal.

Poke cheese into the chiles. Don’t worry if the sides split.

Heat up a well-seasoned cast iron skillet as if you were cooking an omelet. Spread in half the egg mixture; lay the stuffed chiles on the egg layer, and then spread the remainder of the egg mixture over the top.

My mother used to dip the chiles in the eggs and then put them in the skillet, but it’s just as easy to just lay it down in layers.

Cook at a low temperature. You might want to cover it for a little while if you are worried that the egg mixture won’t cook through and the cheese melt before it all gets too brown. When the bottom is lightly browned, flip them over, either all at once or a few at a time.

When you plate them, put a splash of warmed salsa across the middles.

They are sooo good!
Posted by Carolyn at 9:26 PM No comments: