All the other messing around with recipes is really just a prologue to the real stuff - Pulled Pork. Ahh, the delicious smokiness of a pile of shredded pork, random pieces of the well-seasoned, salty, black bark strewn about like flakes of gold in a pan of black sand, and two choices of homemade sauce to slop over your portion of steaming goodness! Enough salivating; let's get to work.

The reason I am interested in this recipe is the shortened time needed. I have made smoked, pulled pork in my old Webber before, taking the full 10 hours to cook it. It was divine, but I want to see if making it easier cuts down on quality. This recipe has you finish it in the oven. I have read from several sources that say to put your smoke in at the front end, that after the first couple hours, it doesn't necessarily help, and can hurt the flavor.

You can see that I have laid everything out on my newest kitchen helper - wide freezer wrap, shiny side up. 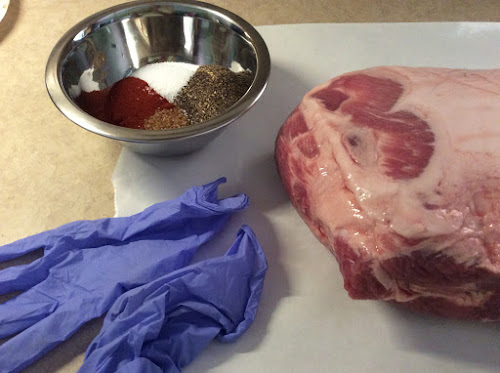 It calls for a "4-5 lb boneless butt roast." What's the deal with the boneless part? Bone-in, baby! This one was 5.5 lbs. It called for a fairly simple rub; 2 parts paprika, pepper, brown sugar, and one part salt. I like to use disposable gloves to handle this part of the process. I HATE getting the moist rub (especially when there is paprika and chili powder) in and around my fingernails! Yuck!

Again, the book calls for the wood chips to be soaked, packeted in foil with slits cut across the top. Then you lay them across the coals. The meat goes on the cool side. 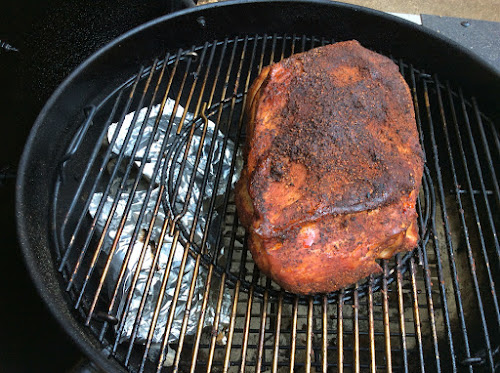 After an hour, I wasn't all that happy with the amount of smoke I had seen curling out of the vents. It just didn't seem like enough, to suit me. After two hours, about when they say to put it in the oven, I ripped a packet open, and saw..... Unburned wood chips!!! Grrr! So that is that with the chip packets. I don't trust them, I don't like them, a waste of foil, unpredictable, even if they are more tidy. From now on, it's wood on coals! I dumped the chips on top of the (still hot) briquettes. 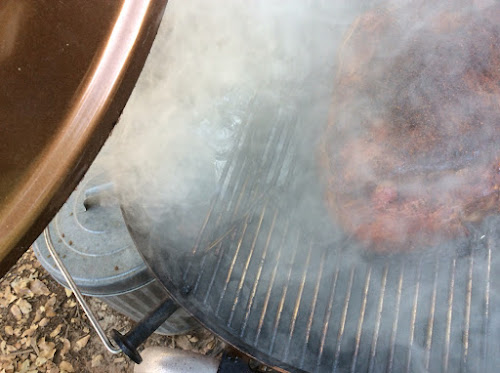 Now that's what I'm talking about! I left it in place for almost another hour, keeping an eye on the lid thermometer. When it dropped down below 250, I pulled out the roast and put it in a 325 oven, in a pan tightly covered with foil.

I left it there for about another three hours. 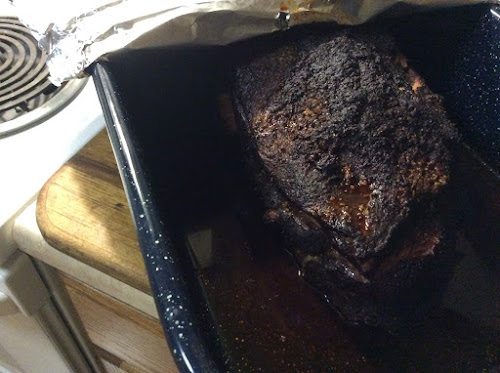 The smoky aroma filled the house. The bark was beautifully dark, but not burnt. 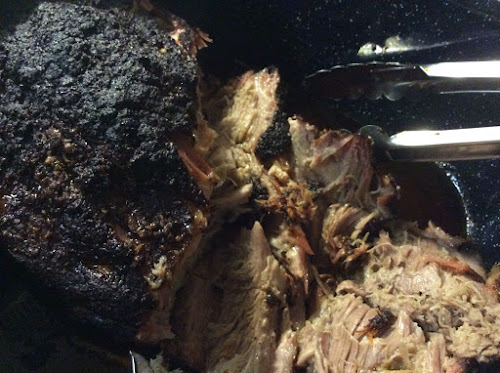 I set out the condiments. (Plus some grilled vegetables.) 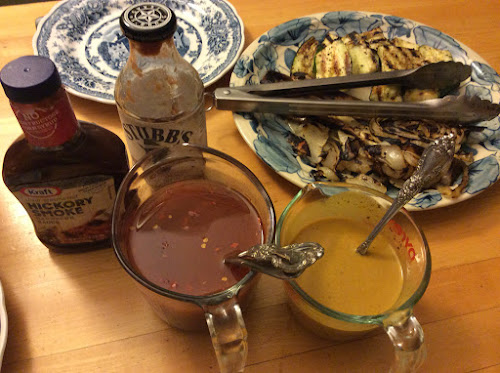 The recipe came with two sauce recipes. The mustard-based South Carolina one was such a hit with my husband, that I suspect I will have to just keep a jar in the fridge for topping various foods; meats, zucchini, pancakes, frosted mini wheats, whatever. I liked best the Lexington Barbecue sauce, which is a mostly vinegar base sauce, with a bit of ketchup, pepper flakes, pinch of salt, pepper and little sugar.

I have to say, that for me, I see no reason to fiddle with the Webber all day long to do pulled pork any more. This is the way to do it!

Posted with Blogsy
Posted by Carolyn at 12:52 PM No comments:

Well, enough of salmon on the grill! Ok, just one more. (When I think of the word "Salmon," I have a word association with "Samlon," the aquatic species in the book, Legacy of Heorot. If you like SciFi, you'll like it."

This recipe looked cute, so that's why I decided to try it. I've never planked a fish before. This one looked more accessible to me. I bought some flash-frozen wild sockeye, enough for the three of us. I also decided to cook it on my little Q Webber gas grill. No reason to haul out the big guns for a little project like this one.

Instead of using lemon zest and pepper, I minced up pieces of my preserved lemons to go along with the pepper and oil. 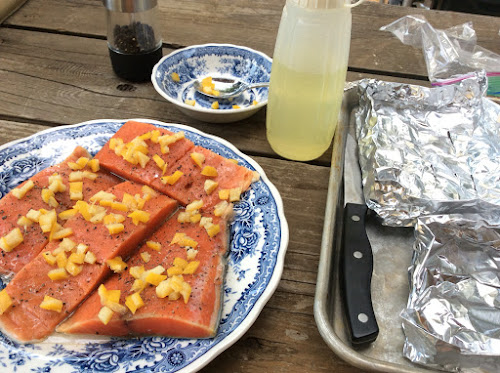 I made up the little foil boats and cut slits in the bottom. Soaked wood chips were to go in them, with the fish nestled on top.

Right away, a meat bee approached and became obnoxious! 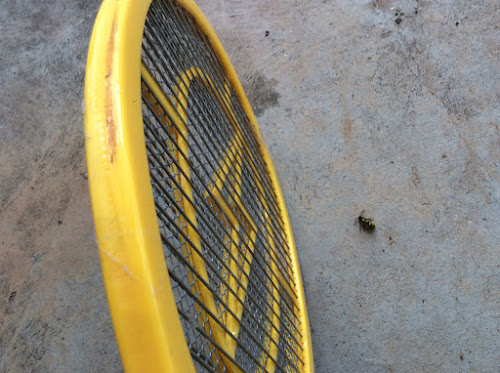 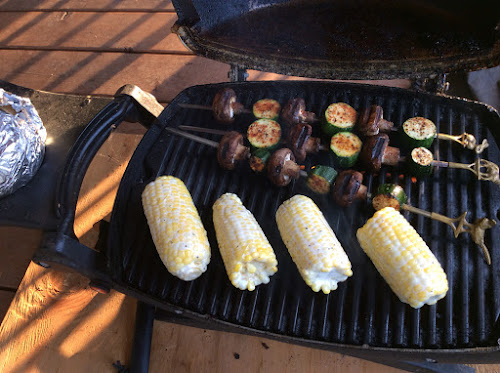 I treat fish like soufflé. Everything else waits on the fish. So I went ahead and skewered some mushrooms and zucchini (inspired by a previous MOG recipe), and took some leftover cooked corn on the cob and slathered it with ranch dressing to sear a little. A little sourdough boule wrapped in foil awaits its turn. 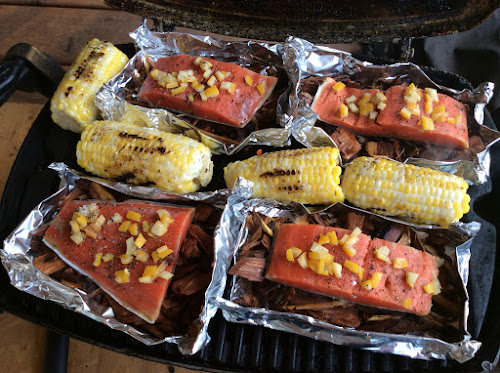 The fish is on, the heat is high. So where's the smoke? 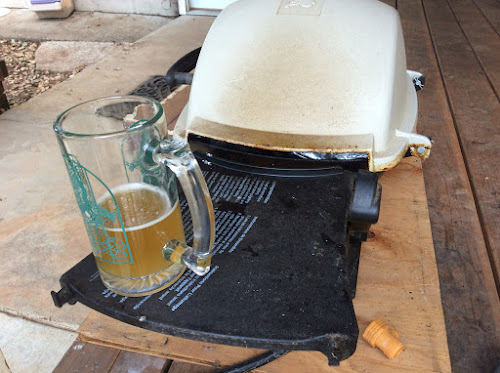 Waiting for some wisps of smoke.

The chips never got with the program. I guess it was just too short a time to get them going. 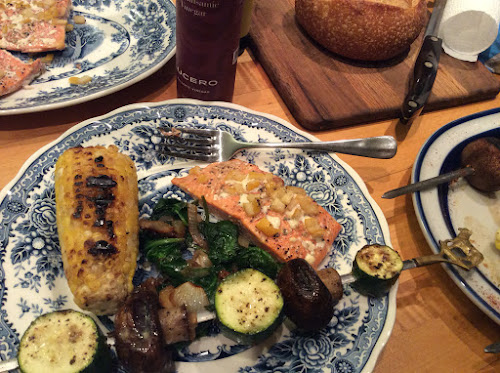 The dinner was delicious. We also had steamed fresh spinach with sautéed onions. The fish was... Ok. Honestly, I like baked salmon. And it's a breeze to do, and get cooked perfectly. So from now on, I'll stick to other critters, like shrimp, if I want to grill seafood.

Posted with Blogsy
Posted by Carolyn at 2:33 PM No comments: