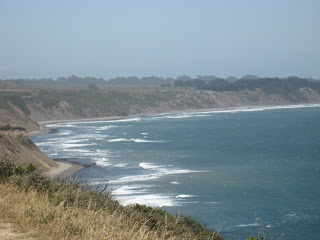 When my daughter Melinda and I went backpacking at Pt. Reyeslast year, we had such a good time and it was such a beautiful place that we knew we would have to share it with someone who was like-minded. When my sister, Nola, said she would be interested in planning a backpacking trip in in May, we said we knew just the place!

We had spent 3 days and 2 nights last year, but the plan for 2012 was to make as full a trip as we could squeeze out the time for. And that meant 4 days and 3 nights. I knew that the basic gear would be the same for a 3 night trip; we would only need an extra day’s worth of food.

For some reason, every time I’ve gone backpacking, I’ll think that my pack will only weigh about 25 to 27 pounds. I don’t quite understand why that number is tattooed in my mind. It is slightly possible that my pack weighed that on my very first training trip when we walked over to the Live Oak Recreation Park and spent a night. And maybe that number has never been supplanted by the following realistic numbers from subsequent trips.

So there I am, shoving pieces of my pile of gear and food and stuff into my Gregory Diva 60 pack thinking, I sure hope I can hold this down to 25 or so pounds! Finally the last ritual of the pack-out arrived—the weighing. I lugged it over to the scale and slid the weights over to reveal…. THIRTY-EIGHT POUNDS! WHAT? 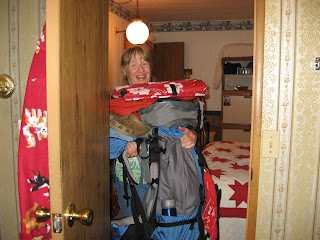 As I went over the contents in my mind, I realized that the basic essentials, such as sleeping bag, tent, Thermarest, pack, fuel came to almost 25 pounds by themselves. Thankfully, my pack is designed to carry a lot of weight quite comfortably, so I knew I could manage. And I was also counting 2 liters of water and my food, which I was told is not part of the official weight of the pack. So I felt a little better and more resigned to the load.

We were very happy to have a driver to drop us off and pick us up this year so we would not have to stage vehicles at the start and end points. drove us to , where we ate our lunch and enjoyed a few minutes at the beach and the estuary. 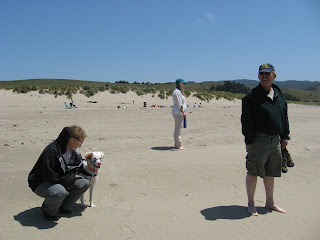 Now I am fond of a few food-like items that are for sale at grocery stores and Walmarts. I am usually able, nay, always able to restrain myself from buying and eating them. Items such as fresh cinnamon sugar Hostess Donettes. But I have a harder time resisting when my sister is the little devil figure on my shoulder saying, “Go ahead! Get them! Splurge! It’s for vacation!” And the little angel figure on my other shoulder already has her mouth full of a couple of Donettes. These were APPLE cinnamon sugar flavor, which sounded nice, so I bought them. And yes, I shared a few and then ate the rest of the bag the first day. 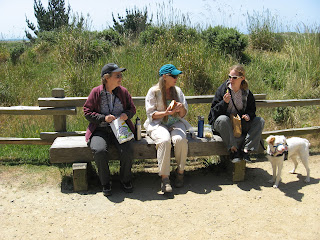 Our reservation for the first night was at Sky Camp. It was to be a fairly short hike, though the word “sky” was suggestive of rising in altitude via a steep hike. Instead of the cheater trailhead to the camp which would have made our hike over almost before it started, we had our driver drop us off at the more reasonable trailhead at the hostel. Nola and I appointed Melinda as the “Trailmaster,” since she was the only one with the proper qualifications, i.e. she did not have to turn the map around like a steering wheel to see which direction to go.

We unloaded our gear, snapped on clips and hung cups, poles, shoes, laundry (oops, that was later) and water bottles to our backpacks and staggered off. 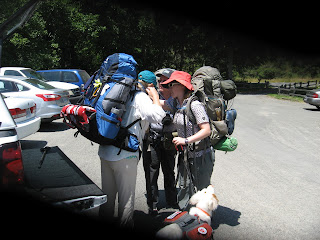 Our Trailmaster pointed her stick. “That way!” she said. We circled around in a bit of confusion, since it looked like we needed to go the other way. But as we were reminded: “Who is the Trailmaster here?” Our driver bid us Godspeed and began inching out of his spot as we disappeared around the corner. Soon he had the rearview in position to see us for one more “goodbye” as we passed back by on our way to the trail we were supposed to take.

Too shortly, another trail decision had to be made. We had planned on taking a shorter trail to Sky trail and avoid “,” which sounded ominous or utilitarian, either of which didn’t sound scenic. Yes, there were trail signs at the intersection, but we hadn’t been on the trail long enough to know how to interpret what they meant when they said “Fire Road, x miles, [arrow]” and besides, the other one looked hidden and unused, and besides, the Trailmaster didn’t press hard enough for her choice. And besides, anyone who knows me on the trail shouldn’t trust my choice, so it’s NOT MY FAULT! 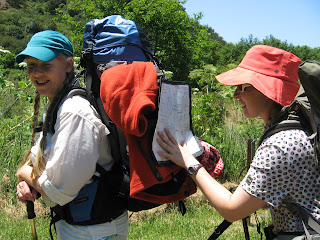 After a couple hours of hiking, we realized why it was called . Sometime in the past, this area had burned. Some of the views were quite striking; it turned out to be very scenic and enjoyable. And the other advantage to taking this route was to reinforce the authority of the Trailmaster. (“Hey! I said to take the other trail!”) 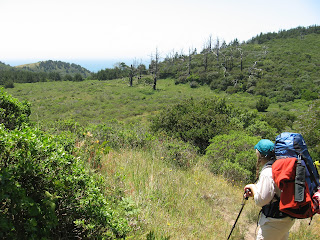 We did finally arrive at the lovely Sky Camp and after meandering aimlessly about we finally found our site. Nola had picked all our sites ahead of time, using intuition, Google Earth type visuals and descriptions. And each site, we decided, was the best of the whole camp! Here, we had a nice, private area with either sun or shade, as we desired. 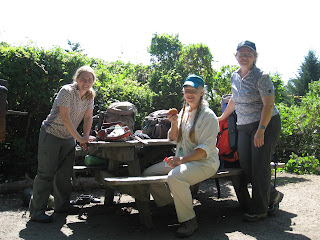 Back when we were packing our backpacks, trying not to throw random stuff in as the time drew close to be gone, Melinda and I viewed Nola’s chair with a skeptical eye. Is she really going to drag a CHAIR along? She did. And I am not ashamed to say that I used it more than she did. In the future I am going to see what unimportant things I can leave out, like say, deodorant, extra underwear, first aid kit… so I can bring my own Crazy Creek chair. 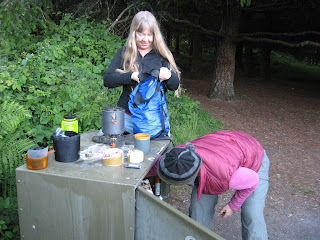 (yes, that is poison oak behind the food locker)

We had a nice dinner (guess I need to expand, since this IS “Food Adventures”) which consisted of various freeze-dried packets. Mel had a chili mac thing, which ended up a little soupy, I fixed up half of a beef stew packet that I had bought off the expired rack a couple years ago, and I think Nola had fruit, granola and tea or something. But the highlight was the Platypus pouch of lovely grape juice, from .
Next to come, Day 2!