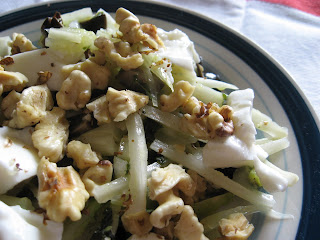 Thought I’d give fennel bulb another try. I ended up with sort of mixed results, which was too bad, since it was a little expensive. I did substitute the black olives I had in the pantry for the Mediterranean style olives it called for. But I don’t think it would have made that big a difference in how I liked it.

I was looking forward to the mild anise-like flavor that I could smell as I was slicing it. The recipe called for it to be sliced lengthwise, thinly. It was sort of hard to figure out just what they meant the finished product to look like, so I made matchsticks. It called for 1 whole cup of mint leaves, chopped up. But that seemed a little overpowering to me, so I reduced it down to about a third of a cup. But it still overwhelmed any delicate flavors that I’d been hoping for.

The dressing was basically equal parts lemon juice and olive oil, salt and pepper. I love lemon juice, but I think I am more partial to vinegars in salads like this. So the lemon didn’t suit me as well as it might have someone else. A quarter cup of chopped onion was also called for.

For my serving pictured here, I topped it with some pieces of fresh mozzarella and some white (skinless) toasted walnuts. The fennel was very crunchy, maybe a little too much so, sliced like this. But the mixture of textures was nice.

Got this out of a Good Housekeeping compilation cookbook.
Posted by Carolyn at 1:52 PM