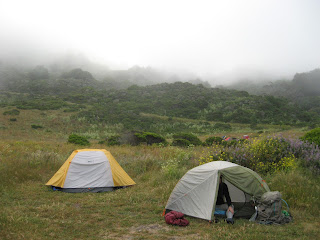 I spent a surprisingly warm night at Wildcat. When I peeked out from the tent flaps, I saw the reason why. A mist had settled over the campground, wisping and floating in a sea-gray way. 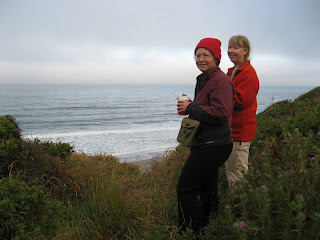 A foggy morning just shouts for a hot cup of coffee!

Today was our last day on the trail. We had planned on getting underway around 8 to 9am, though there was no big hurry. Melinda “The Trailmaster” had figured it all out, that we would arrive at the Palomarin trailhead in the vicinity of noon. We would decide whether or not to stop for a lunch break when we saw what our leaving time was. Or driver was to pick us up at 12:30pm. 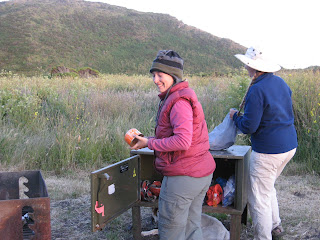 So we messed around. We went down to the beach to see if those nice Wigwam hiking socks were still abandoned in the sand. (they were; I took them) We drank our coffee, made breakfast, got dressed, looked at the birds, and took down the tents and packed them wet, since we could lay them out at home later that day. 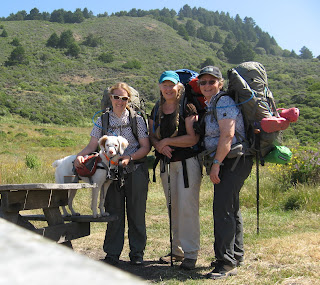 Once we finally hit the trail, we were shocked to note that it was almost 10:30. That would make our arrival closer to 1 or 1:30, if we did not stop for lunch. But we figured our driver wouldn’t start to worry until after an hour of waiting had passed. But we did step up the pace.

The trail was simple this day, no forks to get lost on. 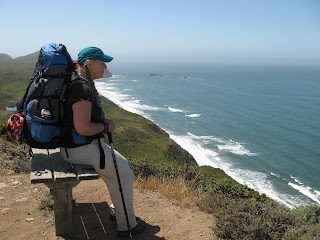 The only sort of side trip we took was where the Coast Trail split around the little lake and gave a nice view of the ocean on a little ledge sporting a sturdy little bench. I could feel a surprising strength in my legs as I strode along. It had been 3 days of good, solid hiking with a fair amount of ups and downs, but I was good for it. I’m sure that the vision of my husband whom I hadn’t seen for several days waiting at the base of the trailhead steps also gave wings to my feet. 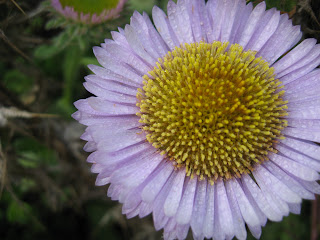 Some of the interesting characteristics of the trail had to do with erosion. You could see many places where the trail was the handiest place for water to run down, with the anticipated results—gullies for trails. The gullies were very hard to walk in because they were only about as wide as a stride. So if you lined up one foot in front of the other, it worked. But if you swayed a bit, and a foot had to step out a little keep your balance, then it got tricky. Because there wasn’t room to put a foot aside. So what would happen is that the feet stayed lined up and the wobble was taken up by everything on up from the feet. I’m the swaying of my arms and backpack looked suspiciously like too much grape juice or a neurological problem. When it got too bad, someone had just started another trail up on the turf beside the gully, where you could hop up and continue on. More than once, I straddled the gully-trail, walking along on the shoulders. 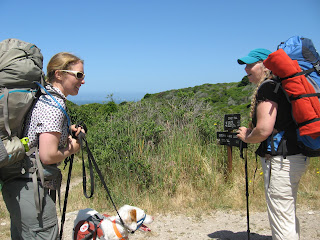 Each trip, we try to think of The Treat. What treat can we bring that may have no nutritional value at all but is necessary for general morale? At Olohne, we ate Sees Peanut Brittle. was caramel corn one year and Paydays the next. The caramel corn was good, but a big pain to handle the pieces. The Payday was good, but I didn’t want the peanuts this year. I didn’t want to deal with chocolate and it’s melty mess. I’m not fond of hard candy, though we all enjoyed an occasional lemon drop from Melinda’s snacks. So after indulging in one of my favorite hobbies, mentally cataloging my favorite candy bars, I decided to buy Big Hunks for the trip. I got a bag of snack size ones to help me stagger them out throughout the trip, and also to share.

The Big Hunks were great! In the heat of the day, they were nice and soft, but not melty. If they were harder, I’d just make sure to gnaw them more carefully to not pull out fillings. The only change I’d make is to bring the regular sized ones next time. It was annoying to have to work with all the little papers to peel off each time I wanted a bite. It always made more than one piece of trash, and invariably I ate two at a time anyway.

We hurried right along, noticing the spot where we had taken a lunch break the previous year. Melinda was the one who recognized it. It had been foggy then, and today it was bright sunshine, so it looked completely different. We strung out along the trail a little more today as we neared Palomarin. The cliffs there are magnificent. And one thing that makes them magnificent is their danger. They are crumbly and go straight down a hundred feet or more to the bit of beach and rocky surf. We were starting to meet day hikers going for a walk along the cliff trail. Nola was behind, out of sight a few curves back. 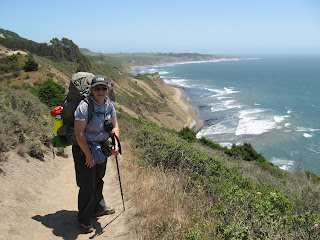 Have you ever met a stranger who seemed to hit some deep unconscious sense in you with an aura of, well, maybe not evil, but with something maybe, “off,” something that makes you draw back, feel cautious, be suspicious? I met a man on the trail like that. The meeting was brief, just a whiff in passing as he strode by with his trekking poles. He didn’t look or speak to us, not in a bad way, not in a good way. I didn’t analyze it, didn’t speak of it, just noted it. Shortly afterwards, Nola caught up. 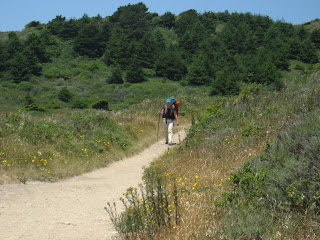 “Hey! Some serial killer could have just pushed me off the cliff. Just a little poke and I’d be gone! No one to see, and he would have just kept walking!”

Now that was peculiar talk from Nola. So I asked.

“What made you think of that? Was it perhaps about the time that last hiker passed by?”

“Yes! Something about him…”

Finally we were in sight of the stairs, then end of our journey. I dashed ahead and stood their looking into the windshield of the truck at the head of my husband, passing the waiting time by reading. He felt my gaze, I’m sure! And looked up at me. He pulled the truck closer and then got out, smiling at me. I beamed at him. He drew closer. I reached out to him, and I handed him my camera. 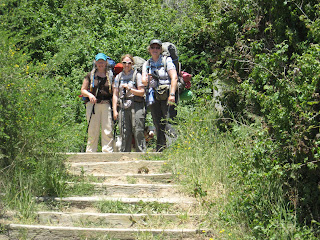 (Unknown to us, he had thought we said to pick us up at 11 or so. He didn’t want to be late, so had waited from about 10:30 to 1:30, when we finally arrived. So now we know how much better we need to be about communicating and confirming our times!”
Posted by Carolyn at 1:25 PM