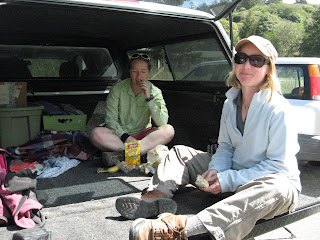 I’d been looking forward to this backpacking trip for a long time. Perhaps too long. Sometimes I think it would be better to wake up in the morning and have someone tell me, “Hey! Tomorrow morning we head off on a 3 day backpacking trip. Get ready!” Then I kick into high gear and tear around like crazy putting it all together, and then we leave.

But instead, what happens is this: I putter around for weeks, months even getting every little thing ready, getting more anxious as the time approaches, anxious that I might have forgotten something to put on my list that I can’t actually pack until closer to the last minute. But will it all fit? And what will it weigh? So several trial pack-outs ensue. And then FINALLY it’s for real.

Saturday April 9, I drove out of Marysville at 6:30 am, headed for the Bay Area. Lovely drive, NO TRAFFIC! A lovely byproduct of a Saturday morning. Pt Reyes is a really confusing area when trying to figure out a route with all the roads winding around there. I never realized that it even existed before, this whole peninsula full of beaches and trails and wildlife. I set Kathleen (my GPS) to take me to Bolinas, since she didn’t seem to recognize any of the other locations I typed in. From Bolinas I could follow the written directions.

Highway 1 is the most incredible stretch of road! I traveled a piece of that working my way northwest to my destination. I had been on it about 40 minutes traveling north, when all of a sudden I had the awful thought that I should have been traveling south on it! I got all shaky and pulled over as soon as there was a wide spot and pulled out my map, disoriented as to where I even was. I was going the right direction, and almost to Bolinas, so I got on my way again. But it took about a half hour to lose the quiver in my gut!

We were to meet at the Palomarin trailhead at 10am. I arrived at 9:50am. Melinda and Erin showed up a few minutes after 10. This kind of timing was pretty amazing, since neither of us had been over there before and were giving it our best guess for driving time! We left Melinda’s truck parked there and piled into my truck for the long haul to the to take care of the paperwork. There are some nice picnic areas and a wildlife interpretive center there. At the little store, you can buy any kind of nature guide you can think of.

From the visitor center, we then drove over to The Hostel, which is about a mile inland from . That is where the Coast Trail begins at the Laguna trailhead. We ate our lunches and then got our packs ready to go. Even with my new pack, Melinda found a lot of humor at my expense concerning the gear I had lashed and dangling on the back. Old habits die hard! My pack weighed too much, I’m sure. It was about 34 pounds without water. Yikes! 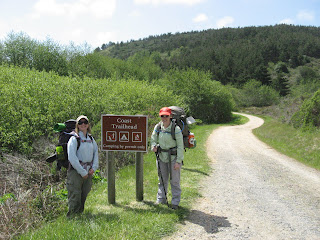 Only a short distance into the hike, we had our first obstacle. A lake of water across the trail. There was a scrubby little trail that crawled up the hill beside the trail, obviously someone looking for a path around. But did they make it all the way up, around and down? Erin and I gladly sent Melinda to do that while we discussed how we were going to wade it. Melinda kept calling out encouraging words like, “I don’t think you guys can do this,” while we rolled up our pants, and took off our hiking boots and slipped on our sandals and crocs. It never got up past the calves, thank goodness! We met up again and went on our merry way. 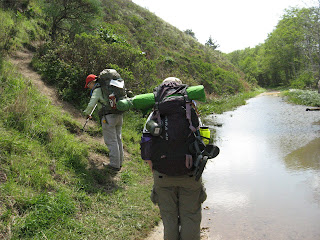 This first day we only had a couple miles scheduled for hiking. We had so much driving and staging, and then shaking down the pack-out that it seemed for the best. Those miles were fairly level and pleasant as we approached the ocean and our first camp. 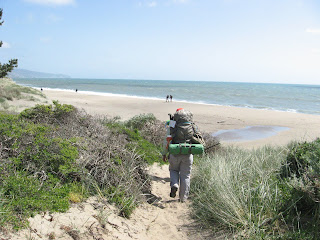 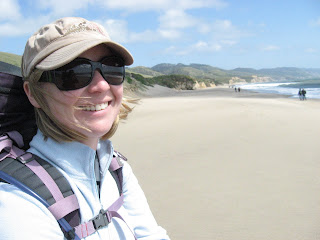 Coast Camp is at a small grassy valley a short distance away from the beach. A drinking water tap and clean vault toilets are at the main camp area, and around the bend seven campsites are tucked along a short trail. Each of these campsites has fairly decent privacy, as opposed to the ones in the little valley. What looked like a Boy Scout troop was camped in the main area. It was sweet to see them with all their little tents and such, but still, I was glad they were there, and we were over here! 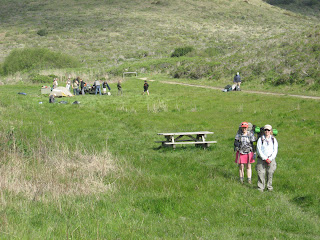 The wind was really blowing, but we got our tents pitched and went down to see the beach. Every beach we went down to was just gorgeous. The waves were rolling, curling and breaking close to the sand, like it does on these steeper-sloped northern beaches. The wind was blowing sand grains against my ankles as and I trudged south along the wet sand. We were headed downwind, and I knew that when we turned around to head back, we’d have to pay the piper and lean into the blowing wind. We came upon a swift-flowing stream that was cutting across the beach and into the ocean. It was rocky there and could have had interesting tide pools in it, but it didn’t look safe enough to go hopping around on it. Every time a particularly big wave crashed over the rocks, the gulls would hop up a few feet into the air, hovering until the wave washed back out again. 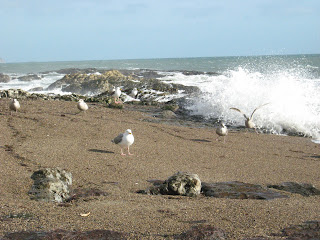 Each camp was supplied with a locking food box to keep the supplies out of the hands of raccoons and other critters. We had gotten a beach fire permit (driftwood being the allowable fuel), but it was so windy there was no question of us wanting to do that! The camps also had barbeque grills, if one was so inclined to pack in briquettes. Now when the rules were read to us, an emphasis was made on the fuel. Wood—beach. Briquettes—barbeques.

Close to sundown, a ranger came to check on permits, food box usage and… fires. We passed inspection. Meandering up the campground trail, we happened to view one of the campsites also under inspection by the ranger. He was lecturing a group on the use of the barbeques under the steaming veil of wet smoke that was emanating from the drenched log on the grill. I heard him say, “…next time I’ll issue a citation,” and it made me glad I hadn’t been tempted to throw a log on the BBQ and light it off! 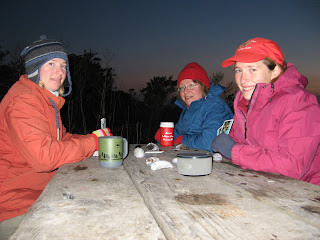 We reconstituted the Burgundy Beef Stew I had made up and fixed up a couple packets of loaded mashed potatoes. We had brownies for dessert and hot cocoa on top of that. What was going through my head was that the more calories I could consume, the warmer I would stay during the night.

When I was younger I NEVER stayed warm enough when camping. No matter how many clothes I layer on, how thick a sleeping bag, I always had to worry about being cold. I don’t know if it was the calories or if it just wasn’t that cold, but I had a very comfortable night.