We take a look back at Glen Camp in the morning as we leave. What a gorgeous meadow! 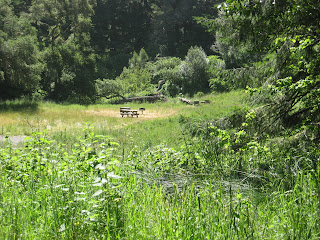 Again, our tents were nice and dry so we didn't have to do anything but fold them up and stick them into our packs. I had boring old oatmeal with dried apples and nuts. It was lots more boring than it had been before, now that I knew I really wanted eggs with bacon. Ah well. 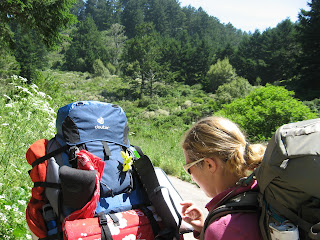 Since our next camp, Wildcat, was only about 1 3/4 inches away from Glen, we wanted to not take the most direct route, but meander just a little. Not a lot, but just a little. All the trails curled around like writhing snakes, so thankfully our Trailmaster, Melinda,  interpreted the best route for us to follow using our handy-dandy map in its handy-dandy holder fastened to the back of Nola's pack. Truthfully, even now I can't look at the map and quite figure out what we had intended to do. I just know that it included finishing up Glen Loop, peeling off around a corner, very shortly taking Old Out Road, and then we would end up at Wildcat after taking another bit of trail.

We had to ponder the trail more than once, but it all looked right, so off we hiked. And much further than we had expected, and we still hadn't found the turn-off we were expecting. When we stepped aside from a couple of horseback riders, we were told that we had, indeed missed the turn-off we had been looking for and were now, by default, going to be taking the Alamea Trail to where it connected with Old Out Road. We couldn't imagine how we had missed it! But we had, so we took the next off ramp-Alamea. 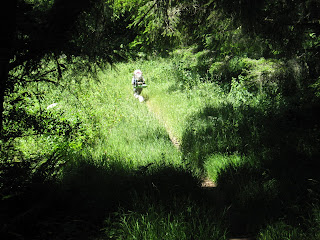 We were actually glad it had worked out like it did. This trail was really beautiful. Dappled sun, riotous vegetation, fields of huge stinging nettles, and lots of ferns. We ran into the same horseback rider, coming back the other way. She said that she looked at the sign we'd been keeping an eye out for and saw that it was oriented the opposite direction from where we were walking. But we didn't even notice a trail going off! And it wasn't even on my left side, where I don't tend to notice things. 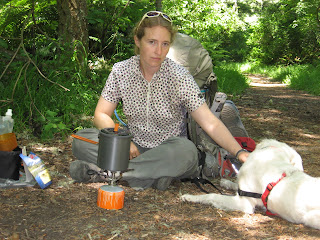 We had a nice little lunch at the crossroads of Old Out Road and Alamea. Nola and I had tuna packs and Mel had a hot lunch Mountain House Chicken Fajita, the clear winner of all the freeze-dried foods we tried. In fact, I liked it so much that I plan on just taking eggs with bacon and packs of this one, for the whole trip! 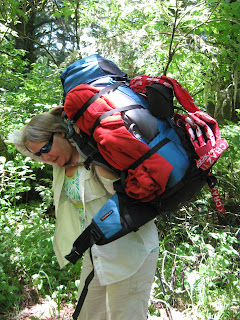 Nola gets more adept at throwing on a loaded pack without the help of a picnic table. I will only say that it involved lots of rotation. 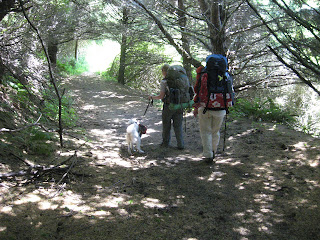 Going in and out of the sun into the shade of the trees was sort of like caving. 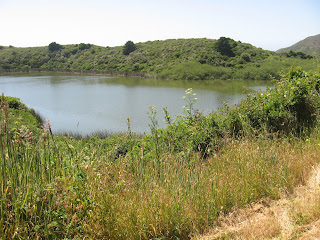 We dropped down to a short section of Coast Trail to finish the hike into Wildcat. A charming little lake made me want to have a paddle boat or rubber raft. This might have been where Nola and I compared notes on the trip we took when we were kids; we went to a little non-motor lake and put out our yellow rubber boat. I remember it being peaceful and enjoyable. She remembers us fighting a lot over it. But we both remember it being fun. 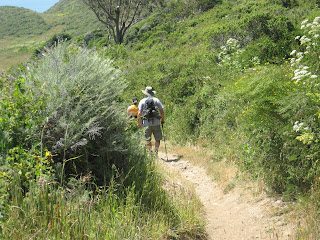 The trail down to the camp was surprisingly icky, with pale powdery dirt and rolly rocks and steepness. Melinda fell. Of course she blamed us for distracting her, which caused her to fall. She would never have dreamed of falling otherwise. And I reminded her that it was Nola's turn to fall, not hers. We'd both already taken our turns the day before. 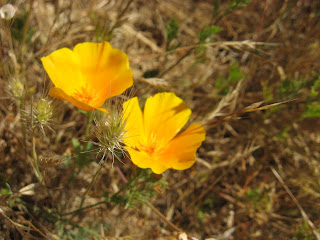 They became bored with me stopping to take pictures of wildflowers, but who can resist California Poppies? 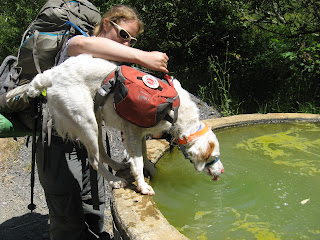 Tess plays mountain goat on the edge of the horse trough. I eyed it uneasily, knowing that, if potable water had not been provided for us, this is what my Katedyn filter would have to work with. 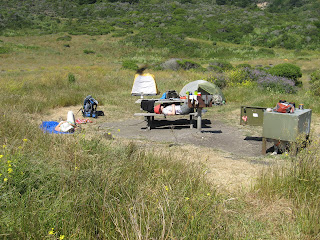 I wish I had taken a picture of Nola at our space, trying to get our attention by waving a bandana on the tip of her walking stick, while we are hollering, "Check the space number on the paper!" We were convinced that she was looking for the wrong spot, but we didn't want to climb up there where she was if we just had to climb back down again. Finally we gave in and went up there. She had already discovered her mistake, but had found the correct one. Which was confusing because she had assured us it was close to the water and restrooms. It was almost as far away as you could get. The only one further away was the spot we had gotten last year.

"It looked closer on the map when I chose it." 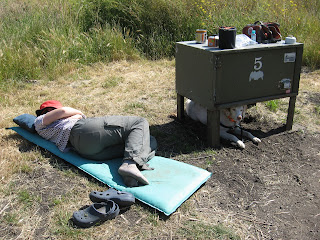 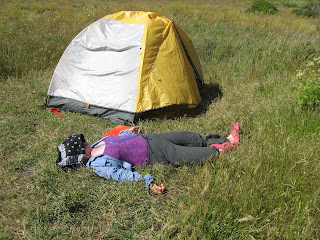 soft...
There were an inordinate number of gophers or some sort of similar rodent. One insisted on playing around making mounds right outside Mel's tent. I know it wasn't the one I had stepped on, apparently just as it was popping up out of its hole because it made a loud noise just exactly like a squeaky toy. In fact, I thought that Melinda had brought one out to amuse Tess. Until she said, "What was that?" So I'm guessing it was underground nursing a headache (or something). 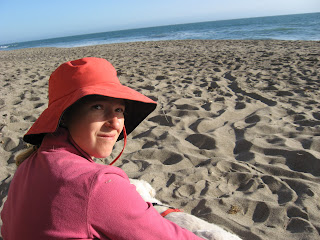 We took our dinner on the beach. 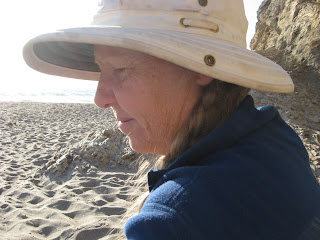 It was nice to just sit in the sand and enjoy the view, 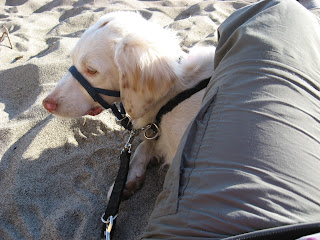 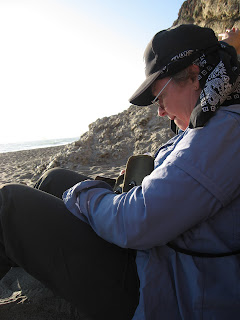 and wiggle toes in the sand. 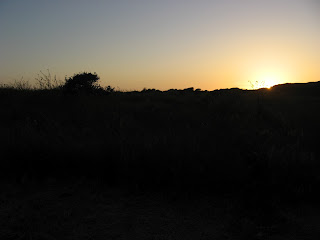 This year, instead of watching the sun go down over the water, we watched it set over the edge of the cliff from our campspot.
Posted by Carolyn at 4:03 PM