Parsnips, or How Can Something that is called "Parsnips" Taste Good? 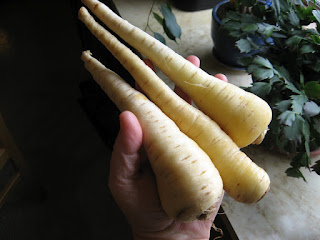 We never had parsnips when we were kids. Nor rutabagas. And those two words are probably the funnest veggie words to say. So I'd say that I was deprived.
Not so much for rutabagas. When I did try them a few years ago, I decided I could take them or leave them. But parsnips were a real surprise. Roasted, they were surprisingly sweet. But it has been awhile, so I thought I'd try them again along with this vegetable variety I'm working through.
I got some ideas from a roasting recipe in my Cook's Illustrated, but since I didn't have all the ingredients, I just made something up with what I had. I tossed peeled and cut-up parsnips in some canola oil along with cut-up onions and celery. I seasoned it with salt and just a little something green; it might have been Italian seasoning or herbs de Provence. My idea was that I would toss in some hot chicken chunks after it was roasted to make a main dish out of it.
I've discovered the key to roasting vegetables in the oven is high, high heat, and a pre-heated cookie sheet. I love that sizzling sound when I strew the oily vegetables onto the 500 degree cookie sheet! Then I pop it back in the oven and cook it for about 20-25 minutes, without stirring.
Well, lo and behold, when I looked for those chicken pieces in the 'fridge, they weren't there any more! Thinking fast, I shredded up a wad of dill Havarti cheese, and when the vegetables came out of the oven, I put them in the serving bowl and piled the cheese on top. It melted down into the veggies ever so nicely, and I think the result was even better than it would have been with chicken!
One piece of 'nip that I ate seemed a little bitter, but the rest was fine. So maybe some parsnips turn out more bitter, just like some jalapenos are more fiery than their bin-mates. So if you ever do get a bitter piece of parsnip, don't let that turn you off this sweet and creamy root vegetable!
Posted by Carolyn at 3:36 PM