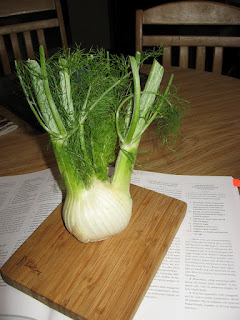 I like vegetables. I like meat. I LOVE bread! But I'm trying to eat less bread carbohydrates. (none, practically speaking) I do love variety, and so I'm trying to see what is out there besides broccoli, salad greens, tomatoes, zucchini and butternut squash.
Meet Fennel. One of those strange things I've seen in the produce section, but never ran across either growing up, in a restaurant, on a plate or even from a personal reference. So I decided to make my acquaintance.
I found several recipes in my Cook's Illustrated, and picked a likely prospect. Apparently you can eat this stuff raw or cooked. Since I have an abundance of young tender radishes in my garden, I decided to try this one: Roasted Fennel and Mushroom Salad with Radishes.
This is the gist of the recipe: Toss the cut and cored fennel and halved mushrooms with a little olive oil and salt and pepper. Throw them on a pre-heated cookie sheet at 500 degrees (yes!) for about 20 minutes. Don't turn them or stir them around. Mix up a bit more oil, a splash of lemon juice, a dab of Dijon mustard, more salt and pepper in the bowl you tossed the veggies in. Slice the radishes thin, chop up some of the feathery fennel fronds and set aside. Pull out the roasted veggies and toss them with the dressing. Let cool to warmish, then toss in the radishes and fronds. Enjoy lukewarm. 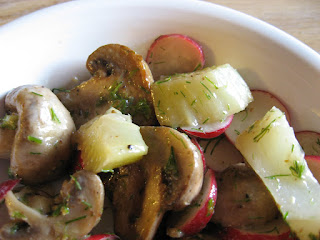 If you want the detailed recipe, let me know. I found this to be quite nice. Not a dramatic dish in terms of taste, but nice. I think that good radishes make the recipe. The fennel is very mild, and the anise flavor mostly comes from the bits of frond.
Fennel isn't cheap, but it is a nice addition to make to my veggie list. I'm going to look into maybe growing it myself.
Posted by Carolyn at 12:04 PM