We knew we had a relatively short day today until we reached our goal, the Sunol trailhead, so we took a luxurious morning. I was in a good mood, as I had passed the night in relative warmth. I did have to get up early to fetch water from the (non potable) pump to make my morning coffee since we used up what we had filtered the night before to heat water for our blow-out buffet.

When it is very important to have plenty of water at hand, such as high altitude and summer hiking, I carry more water bottles, but I knew I wouldn't be drinking that much at a stretch, and I didn't want to carry any extra ounces, so I only had my platypus bladder with drinking hose and one Nalgene bottle. When I have 2 Nalgenes, I designate one for "dirty" water and one for "clean." Something like that is needed when you are getting your water from a pump or hydrant.

What I used to bring the water down to camp instead was my cookpot bag. It does double duty as a sort of freestanding soft-sided pot and holds almost as much as a Nalgene. I heated water for coffee as the camp woke up. 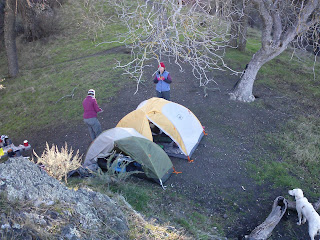 After the big feast of calories and gluten the night before, The eggs with bacon did not seem so appetizing as they had the previous mornings. I had brought some packets of instant oats, which I shared with Loreleigh. I like to stir in black raisins and mixed nuts into the hot mixture and eat it quickly before it cools down. I haven't cared for sweetener in my hot cereal for years. 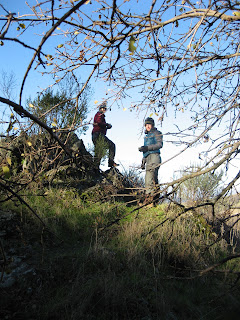 The girls scrambled up on the rocky hillock to enjoy their breakfasts with the view. 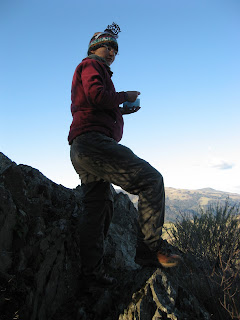 It's hard to look like a dignified alpine explorer with a glittery Happy New Year's hat on your head.

While we were winding up our morning coffee and breakfast, we saw a young man in full backpacking gear walking by our camp on his way to The Little House. He seemed like a friendly sort, so Melinda and I said Hi, and she engaged him in conversation. Actually, it went mostly like this: 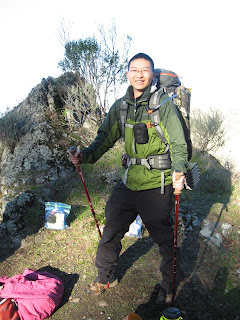 After several minutes of interrogation, err, conversation, we chatted a bit about the trail and where he was headed to for the night. About that time, he started looking at me curiously and asked, "Do you have a blog?" !!!!! What are the odds? He had been looking online for first hand info on the trail and had come across the blog trail stories I had written 2 years ago here. He recognized us from the pictures. And had just happened to cross our paths. And Melinda had just happened to have engaged him in conversation. 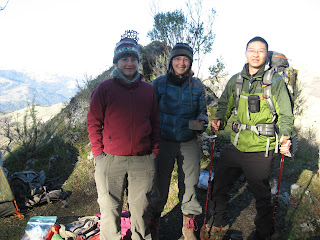 Chris, with Loreleigh and Melinda. He was inspired to start his own blog, and you'll want to read it here. You'll also want to click the link to his video on Vimeo, including his very lovely, peaceful and inspiring landscapes at Ohlone. 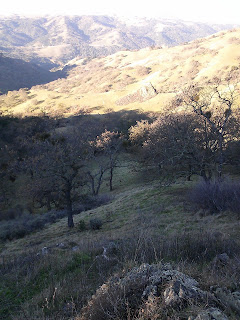 Standing at Hawk's Nest, you can watch the edge of sunrise move towards you as the sun rises over the mountain to the east. 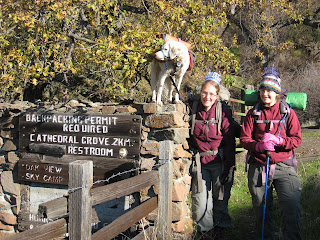 For some reason Melinda thought that Tess would look charming perched up on the stone wall just down from our campsite. But no, she did not jump up there. Though she probably could have. 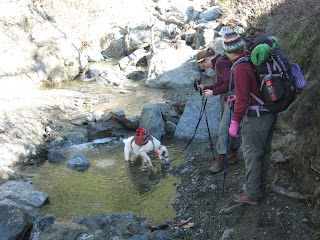 Preparing to cross one of several streams.

Up until now, we had had a marked lack of wildlife interaction. The only maybe was the night at Maggie's Half Acre where Tess alerted, stared off in the dark direction of the water trough and barked. We looked at our guard dog, wishing she could communicate what it was. Bird? Deer? Scary Carnivore? Loreleigh and I flicked on our little LED head lamps and looked in that direction, hoping (or hoping not) for eyes to reflect back. It was sort of pitiful. The light dribbled out of the lamps, fell on the ground and crawled for a few feet until it gave up the ghost. We kept moving our heads, trying, though. I thought I saw a flash of something orangey. And then decided I would just rather turn off the light, go to bed and quit thinking about it, since Tess had calmed down.

Today we ran into a different sort of wildlife. Cattle. I'm quite wary of cattle, especially cows with calves, which is what this herd was. They were across the trail. We stood there for awhile, considering our options, and deciding to go around them on the uphill side. But when we looked up the hillside, there was a bull standing there watching us and HIS cows. I had no plans to get between them! He slowly began walking down the hill. We decided we would go around the other direction, but were thwarted by a hidden ravine. So back to the trail. 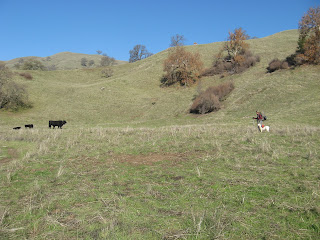 By now the bull was on the trail too. I noticed that a couple of manly day-hikers coming from the other direction who had paused to view the situation had disappeared back where they came from. We decided we would have to go around the herd from the uphill side, but quickly since the cows and calves were starting to get curious about us. Even though Melinda suggested (ordered) in that voice reserved for subordinates that we should hurry, I took the time to remove my polartec jacket. If we had to run for it, I wanted freedom of movement.

We calmly and quickly went around while the bull kept his girls from ambling in our direction. Whew!

While we walked on, I thought about the annoyance of having to wriggle out of my jacket without taking my pack off. As we went from sun to shade to sun again, I began to wish for some other type of jacket. I began inventing something in my mind, and then I realized it had already been invented. It is a Snuggie! I began modifying it. Soon I had a concept and shared it with the rest of the troop. They smirked, and Loreleigh suggested I call it a Snarkie.

(In case you are one of the few who doesn't know what a Sunggie is, let me educate you. It is sort of a blanket with long sleeves that you put on when you are sitting on the couch. It is open at the back, like a big fuzzy hospital gown, so that you aren't sitting on it when you put it on and off and rearrange it around you.) 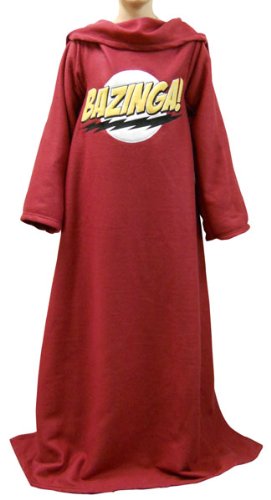 Shortened, this could fit right over my front while I was still wearing the pack. 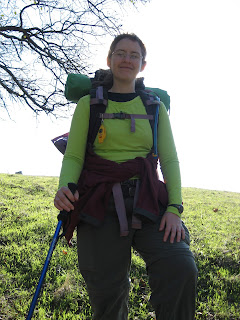 As we continued down the trail, meeting more and more day hikers who had come out to enjoy this beautiful sunny New Years Day, most of them glancing up at our hats and then wishing us "Happy New Years!" we spied a large oak tree that seemed to call to Melinda.  After unsuccessfully urging Loreleigh to run over and climb it, she and Tess did. 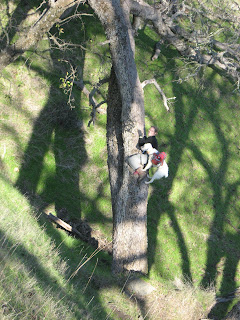 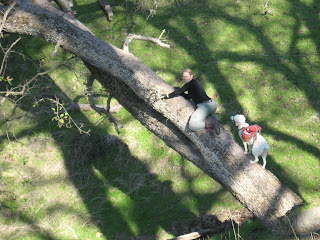 We got our directions fuzzy near the end of the trail, what with Indian Joes Nature trail turnoff and all. So we took a wrong turn.  The upside was that we enjoyed some really pretty creekside trail. But we did have to turn around when it was obvious we should have been there by now. 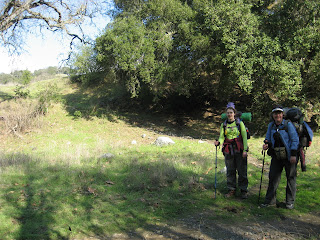 Back on the right trail. 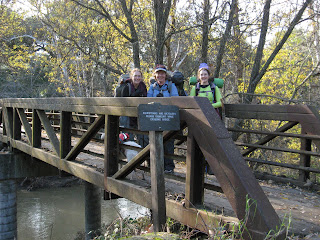 Last bridge before the parking lot. 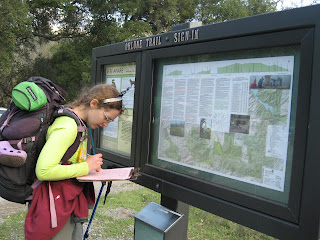 I feel like I should have a great concluding insight from this great successful endeavor. Like some part of the meaning of life, or a spiritual understanding I didn't have before. But most of the wisdom I gained is practical; stay warm, eat well, take rests but not too long, you have to live with what you thought to bring. There wasn't really time or energy to ponder my navel.

And that is enough. It is well for humans to take a span to live in the moment, to see what it is like to concentrate on the here, the now, the basic needs. Out there, you don't "need" to brush your teeth every night, to comb your hair, to have electronic communication, to dine on gourmet food, to worry about the larger issues.

Enjoy that for yourself sometime!
Posted by Carolyn at 2:24 PM