January 7, 2011, about 8 p.m. I’m lying on a thin, cheap backpacking pad inside a small green tent sloped a few degrees (feet down-head up). It’s got to be below freezing out there, and I’m wondering, “What the heck am I doing here IN THE WINTER!” The answer is simple, Melinda. And the way she can make anything sound reasonable and fun. The thing is, it is fun. Maybe not entirely reasonable, but definitely fun!

Melinda had hiked part of the Ohlone Trail (near Livermore) before and wanted to do a longer version for her birthday treat, which explains why we were there in January.

This is what I’ve been training for! I thought. Hey, I climbed halfway to Pike’s Peak, for goodness sake! She warned me it was rated the highest points for difficulty, and Bethany raised her eyebrows at me and asked, “Do you have any idea how steep the trails are?” But in my eternal and inherent optimism, I knew I could do it.

Actually, I did have some doubts a couple days before I drove over there. I had an unusual feeling and finally identified it –fear. I dissected the fear and found that I was afraid of a) being too cold to happily live, and b) that I would crap out and be unable to handle it. The first thing I thought of as a solution was, Can I throw money at this problem and help it? So the next morning I drove up to R.E.I.

I bought the most extravagant pair of cozy sleeping pants. They are light as a tissue, fuzzy on the inside and smooth on the outside. Nice flat seams looked very comfortable. And expensive. But I figured if I were lying there freezing I’d be willing to do ANYTHING to be warm.

On Thursday, we met up at Bass Pro Shop in Manteca, and then drove over to Sunol. We had to get to the Sunol Headquarters and drop off Melinda’s truck before they closed up at 5pm. This was where we planned on ending hike; someday we’ll carry on and do the last leg through the Mission Peak area. A portent of things to come: the place was very deserted. We paid the parking fee, and left for Del Valle in Livermore in my truck.

The plan was to camp overnight at the campground near the trailhead and be ready to start bright and early the next morning. But unexpected things kept happening, like the kiosk not being manned. This place is not one to accept squatters, so we HAD to find a way to be legitimate. We drove down to the campground and beheld the second portent: a gate across the entrance. I parked and we walked down to the camp host to bother them and see what was up. Melinda had checked, and half the campground was SUPPOSED to be open. But what the host told us, while still chewing her dinner and probably wanting to get back to her TV show we could hear in the background, was that the part that should have been open wasn’t because the creek was too high.

As we drove back out of the park toward Livermore, I was already reviewing options. Hotel room? No. Too expensive for just a place to crash. (If you haven’t already, you should read my blog on cheap wine to understand my thrifty nature.) Option 2: America’s Campground. Every city has one. Smooth, level parking, free, easy to find, and a camp store to die for. You guessed it, Walmart! We would sleep in the back of my camper shell. We told Alec, the gps to find us the closest WalCampMart. Twenty minutes later, while Melinda was falling to upon a Subway Philly Steak handily located in the big blue store, we discussed our remaining options. This Walmart closed at 11pm, and there were more strange (creepy) people hanging about than I prefer, so it did not seem prudent to go boondocking here.

As we cruised down the boulevard, pondering option 3, it appeared before our eyes. A huge Lucky Supermarket in a large well-stocked (translate: Starbucks) well-lit lot with a Park and Ride section. And a motor home already in residence to sidle up to. After parking and trying several spots, we found one that suited and began to make our nest. Cozy comforter, pillow, bottle of wine… I slept like a baby. 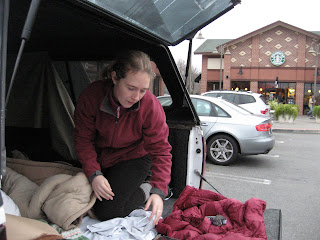 Although our plans from the night before had valiantly included driving to the trail head early and cooking omelets over the camp stove, we relented and went into Starbucks for coffees and breakfast sandwiches.

In a great mood, we drove yet again to the Del Valle trailhead. This time there was an attendant at the kiosk to take our money and give us the map. We had the huge parking lot all to ourselves and a stellars jay. Our packs were sort of “ready to go.” I had left to attaching of the sleeping pad, sleeping bag and tent till Melinda, the expert, could tell me how to do it. Unfortunately, my trust was misplaced and I just lashed them all on the best I could, figuring I’d learn as I went. 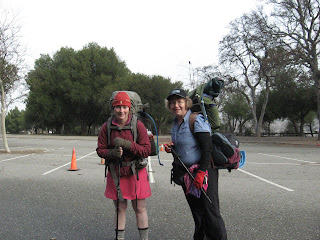 I was more fortunate than Melinda, easily finishing my preparations, while she spent most of the time doubled over in laughter since she could see what I could not –the back of me. 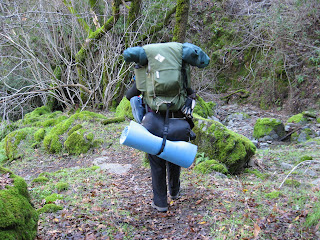 (Yes, I know it looks like a hammerhead shark, darn you!)
I’d been warned the trail was steep, and my oh my! It started out right away, up up up. I got into a routine. Climb for a half hour, reward myself with a chunk of See’s peanut brittle, rinse and repeat. The trail was ruggedly beautiful. The views were pretty and of that foothill terrain that I love so much. 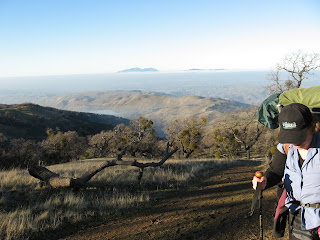 At lunchtime, I had to practically disassemble my packout to get what I wanted. But I had the chance to improve the assemblage, so not all bad. At least I thought. But that was until Schlepers Rock. 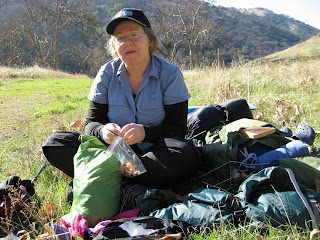 Up a long stretch; behind me was a straight steep trail. We took some pictures of each other, sort of bumping packs. Apparently my sleeping bag took one too many bumps and popped out of its lashing! (cheap Walmart lashing!) Like a happy log it began to tumble down the trail. I wailed, “Noooo! Come baaaaack!” as I ran down after it. I stabbed my walking stick at it, running past it before I could come to a stop. Again, I was the fortunate one who still had some strength, unlike Melinda who was again doubled over with laughter.

We had been confident that we would arrive at the camping area, Stewarts Camp, before dark, but the sun was low in the sky, and we still marched on. Now we were in the shadow of the mountain and leftover ice appeared in patches beside and on the trail. So many times, I thought we were “almost there!” that when we really were almost there, I couldn’t get excited at first. It was 4:30pm, almost dark, and we rehearsed our plan as we walked in. First get the tents up (really unpleasant to do in the dark!), then get our camp shoes and warm pants on, then make up some dinner. 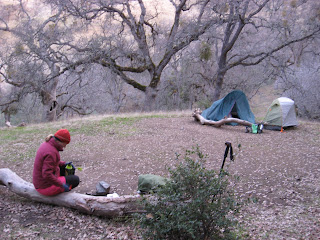 We were so alone. It was so dark. I would have kicked back with a hot drink and meditated awhile, but it was also so cold, that we went to bed way early. We managed to wait until about 8pm before we gave in and hit the hay. I have to admit, I was jealous of Melinda’s tent. It was so cute, and all the poles, strings and loops were color coordinated and reflective. But mine was fine, and I stayed warm enough. Especially with my REI cozy pants and the red watch cap I had knitted. 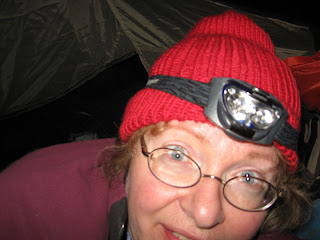 I was happy with our day. I felt strong and capable. I was looking forward to a good night and a bright morning.
Posted by Carolyn at 8:09 AM