My first introduction to the Far North sled dogs was probably the same as most folks, Jack London's The Call of the Wild. I loved that book, read it many times. Most of the artwork surrounding this 1904 novel show Buck, the main character, as a husky-type dog. Never mind that he was actually a St. Bernard/Sheepdog cross. When people think "sled dog," they think huskies and malamutes, wolfish looking landraces. (Landrace is my new word. It means a breed of something that is naturally selected for the environment it calls home.)

Last Saturday we drove up to the Siskiyou Dog Sled races held at the Deer Mountain-Chuck Best Snowmobile Park on the northeast flank of Mt. Shasta. We had read about it in the paper the week before, and it seemed like a great adventure. Neither of us had ever seen anything like that in person before. 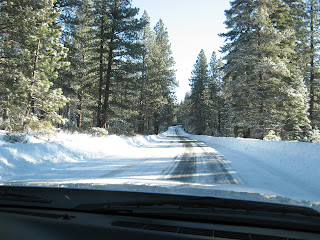 We were a little concerned about the snow on the road, since the truck does not have four wheel drive, but we did have chains in the back, just in case. It was a lovely drive up there, just under two hours, I believe. The sky was clear and blue, the snow pretty and white, the views and the scenery beautiful! 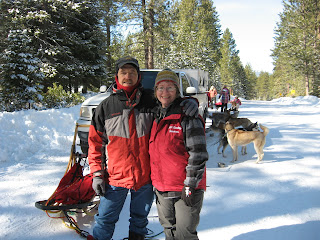 We arrived shortly after the first race had set off, which gave us time to get bundled up and look around before the next race was to start. The races were either distance or sprint, and with either 8, 6, or 4 dog teams. The other type of race was called a "skjorling," which is a skier tied on to a certain number of dogs who apparently pull the skier madly across the terrain. 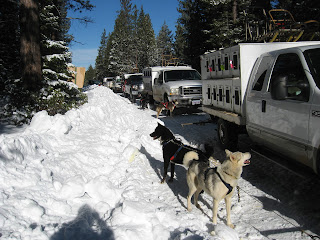 The dogs were either tethered to the rigs or cozy inside their kennels. It was kind of fun comparing it all in my mind to the horse trailers with the hoses tied up to the trailers. But this was all in miniature. The dog owners had all sorts of set-ups. One had a small flatbed trailer with a multi-plex kennel mounted on top. Several had 2-story kennels on the back of their big pick-ups. One professional-looking outfit had a box trailer with 3 stories of plastic dog kennels facing the back door opening. Their dog sleds were mounted on the roof of the truck. 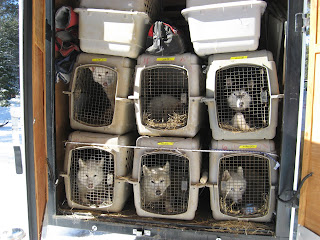 The dogsleds were terribly cute. Some were made of modern materials, but most had a framework of bent wood and were artfully crafted. It looked like the brake was some kind of plate between the skids. One sled at rest had two metal anchors holding in place in the snow. 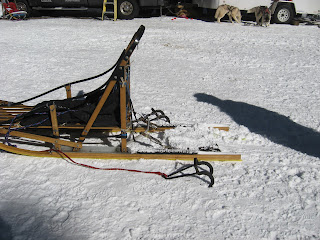 Most of the dogs looked young and fit. They were lean, with not an ounce of fat. You could almost see a shadow of ribs. They reminded me of the endurance horses in top form that I saw at the Tevis Cup race in Auburn. They looked content to just hang out on their lines with a water bowl in front of them. What seemed intriguing to me was that they did not engage in the typical dog behavior you see when handfuls of dogs get together. They did no run around marking territory, sniffing other dogs, barking just for the heck of it, or approaching strangers. In fact the only dog that seemed interested in sniffing butt was a pet dog someone had on a leash. 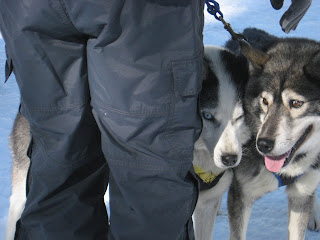 From the moment the traces were laid out and dogs were brought to be hooked on, the pack could tell that it was game time, and that was when the barking and howling started! It was an exciting sound, it was music. 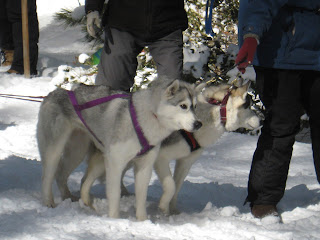 The teams left the starting line staggered by a few minutes. As each team was brought to the line, the handlers held each pair of dogs steady. One or two handlers held the dogsled in place until the signal was given to start. Once at the line, the dogs wanted to run! They were so excited, they jumped up in the air, they howled, they yodeled, they barked, they moaned, they lunged. 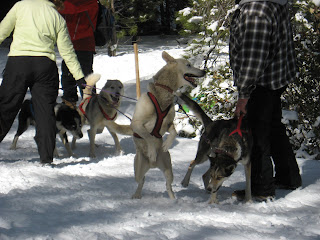 5-4-3-2-1-GO! The dogs leaped forward, straining their traces, pulling at a run. The 4-dog teams took a few seconds to get up to speed, but the 8-dog teams flew forward, skimming over the snowy trail and disappearing out of sight in a moment. 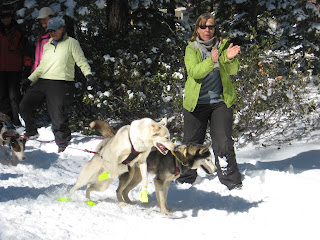 The whole spectacle and the lovely dogs made me wish I had a good friend who did this so I could help crew for her! I had an unreasonable desire to actually do it myself, but Cork looked at me sternly and then I came back to myself. 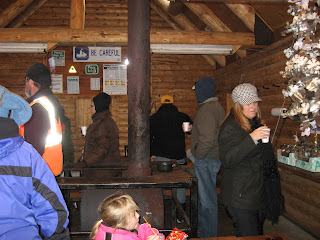 Most of the dogs were huskies and malamutes. Some were other breeds I couldn't identify. One musher had a few huskies along with what looked like husky crosses with a hound dog looking breed.

I had heated up some of my homemade chicken gnocchi soup and put it in thermouses for us. It was just the right thing! 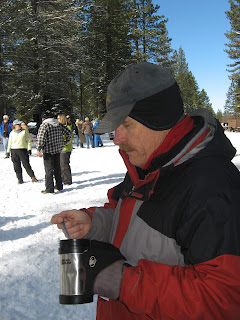 We also had a cup of hot chocolate at the Kiwanis food truck. 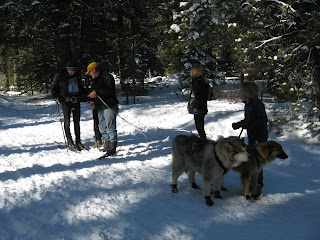 We stayed until the skjorling racers took off, and then we headed back down. It was sort of warmish by then, about 38 degrees, and we didn't want the road to get more icy as the afternoon progressed. 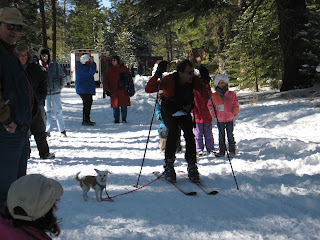 Even though I'm putting pictures up, they just can't convey the feeling of the event like video does. When I get my footage up on you tube, I'll make another post giving the link to that. 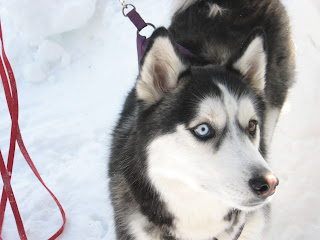 Posted with Blogsy
Posted by Carolyn at 9:00 PM