You may scoff at the idea of freeze-dried egg chunks with chips of bacon bits in a heap at the bottom of the foil bag, but to us it was ambrosia! In fact, it was so delicious, and I was so hungry that I sipped the warm broth leftover from the rehydration. And the bonus was, no clean-up! And the other necessary breakfast item, hot coffee, was provided via Via, Starbucks instant coffee packets. The first couple backpacking trips we tried to manage the pour-over fresh ground coffee beans, but even though it was a little better, it wasn't THAT much better, and the Via was so easy and neat. 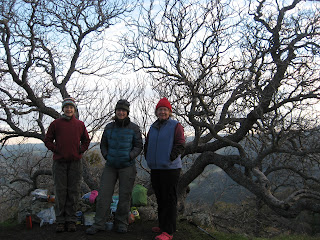 Standing in front of the Breakfast Rock at Boyd Camp. 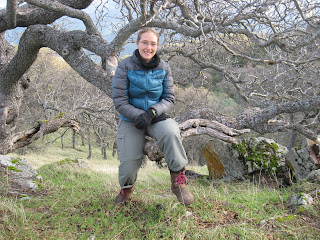 I wonder how many other people have perched themselves on this very tree limb for the photo op? It all sort of moved in a disturbing way, so you see her foot bracing the effort. 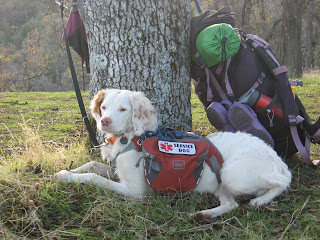 Tess was ready to go long before we were. We had the "first day rearrangement of packs" going on and the routine of packing up to settle on. So we didn't get on the trail until about 9:30am.

Getting started that late meant that our Trailmaster decreed it would be later than noon when we stopped for lunch. We needed to make sure we got to our next camp in plenty of good time.

I had remembered that there were some pretty steep ups and downs in this area, but I'm coming to believe that backpacking is like childbirth. While you are involved in it, you are thinking, "Now why am I doing this?????" but after it's over, a little time passes, and you want to do it again! We went down into the ravine, and collected our water, since it was the first source we had that morning. 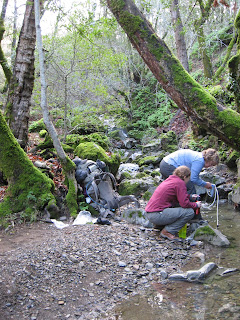 I can do it myself, but it is a lot easier to manage the hoses avoiding cross-contamination and get cleaner water with a helper.

Next came, "The Big Burn," a long and steep track up the mountain. My young, nimble hiking partners climbed out of sight as I plodded on. I didn't care, since I knew there would be a certain point they would wait for me, and nothing was harmed by me being a little slower. I believe the most satisfying and enjoyable hike is one where you go your own pace. It's as tiring to slow down for your partner as it is to try to hurry your natural pace to keep up. My motto is, I don't hike fast, but I hike steady. I have already learned that stopping for more than 2 or 3 breaths to straighten your spine can make it more tiring and harder to strike off again.

The long up culminated near Schlieper's Rock. I always think of it as "Schlepper's Rock," because that is when you are thinking, why the heck did I schlepp all this @^$#*! up here! If you recall from my last trip, that is where my sleeping pad and bag separated from the rest of my pack, and I ran down the trail after them, envisioning running ALL the way down after them and back up, while Melinda had to sit down because she was laughing so hard. See here.

Close to 1pm I started looking for Melinda to call lunchtime. Each time I topped a rolling hill, either I didn't see anyone, or I saw my hikers disappearing over the next rise. 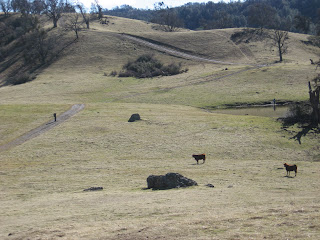 Finally, close to 1:30, I decided that I was ready enough for lunch, that if I didn't see them, I would just stop and eat by myself over the next hill!

Melinda and Tess at the bank of Johnny's Pond, Loreleigh on the road.

Thankfully, they were already there waiting for me at Shafer Flat. My lunch was the easy and protein-rich tuna packet with a packet of mayonnaise stirred in.

Though the sun was shining, it was still a little chilly, so it felt good to get up after eating and warm up by hiking. 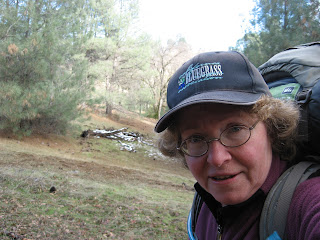 This may look like a self-portrait, but it's actually a picture of the snow behind me.

Rounding a corner, we saw a shaded little pond that was completely frozen over. 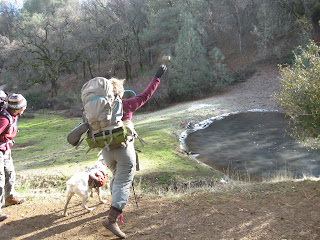 We amused ourselves by skipping stones across the surface, occasionally breaking the ice with a larger rock. 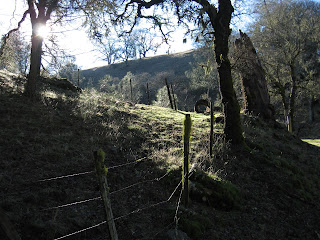 The sun sank as the afternoon wore on. 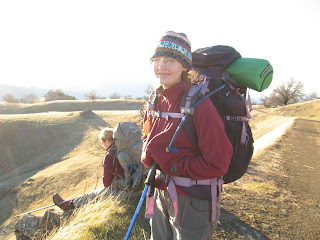 Nearing our camp, by Rose Peak.


We got in to Maggie's Half Acre about 4 or 4:30pm, just in time to set up tents and get our dinner ready before dark!

Ahh, dinner. We lived for food! We each had our special treats for the trail along with our freeze-dried delectable dinners.  I carried Twix, dried fruit and nuts, Loreleigh carried a strawberry Abba Zabba and brownies. I can't remember if she or Melinda had the Big Hunks. Melinda had Pay Days. For my dinner that night, I had my Mountain House Lasagne Pro Pack to rehydrate. I can't believe it was so delicious! Stringy cheese coated my folding spork, its tomato-y salty goodness warming my innards as the packet warmed my hands. I knew that the more calories I could choke down, the warmer I'd be that night.

And it was cold! I claimed my Little Debbie brownie from Melinda and chased it down with a hot decaf Via.

We had spent a fair amount of time trying out different pieces of real estate for our respective tents. My problem is that I have a hard time telling if something is level or not. Blame my glasses prescription. The strength of them plus the optical qualities of the glass make some lines look curved. That is, until my brain takes over and says, Look! those lines are straight, so start seeing them that way! So my eyes get confused sometimes. Melinda chose our area first. Then I looked up. Big old, maybe dead tree limbs. We'd had a scare one night at Point Reyes when a tree limb broke off in the woods a short distance from us. Crack! We jumped out of our tents, then looked up at the big heavy limb over our own heads. Not nervous enough to re-pitch the tents, but enough to take that into consideration in the future! Read here. 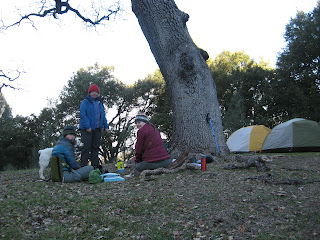 It was so cold that I knew I would have to do better than I had the previous night. So I wore to bed everything I had brought, except for my raincoat. 2 pair heavy wool socks, silk long underwear, smartwool longsleeve underwear top, hiking shirt and pants, polartech jacket, wind-breaker polartech vest, wool beanie, ski gloves, etc. I put my folding backpack chair under my Thermarest Women's Pro-Light pad.

The icy wind was blowing so much and so constantly that I had to wonder whether there was a waterfall nearby because of the noise.

I amused myself during the hour before I actually tried to sleep by making lists of additional warm clothing I would bring next time. (Yes, a lightweight down jacket would solve a lot of problems, but there were additional options) The short list is: battery operated socks, neck gaiter thing that I could pull up over my lower face, wool cap with earflap thingys, you know the ones that look sort of silly unless your ears are cold and you won't even worry about the braided yarn things that hang down, smartwool underwear bottoms (thank goodness I'd run to REI the night before the hike and bought a smartwool top!!!) or even better, down pants. If they make them.

As soon as I had settled down in my tent, I heard what sounded like little misty raindrops falling on my tent fly. Oh Great! That's all we need--RAIN! Loreleigh thought it might be leaflets and debris falling. But it hadn't been doing that earlier. I reached my had out to feel the fly. Dry. Then Melinda suggested the most reasonable solution. The dew had started to fall, but it was turning to ice before it landed on the tents.

I passed the night, while not very comfortably, not freezing either.