My potion had steeped for a half hour in the hot water; now it was time to crank it up. The barley tea had to come to a full rolling boil. Gas gives you the most control; I wouldn't have done this with an electric stove top. A turkey fryer would have been excellent to get it on up there, but the gas stove top was ok. In the meantime, I wanted to warm up the Liquid Malt Extract, from henceforth known as LME. (Brewing is full of abbreviations, and if you don't want to look like a total novice, you nod and smile when they talk in alphabet-ese) 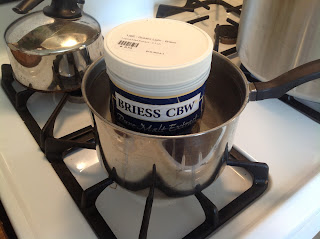 I knew from the demonstration a few days ago that this stuff is thick and sticky. Really, it's worse than honey for being hard to rake out of the plastic can. So I did the recommended thing; I set the can into a pan of hot water. (I didn't actually heat the water on the stove with the can in it though!) While the mixture cooked, I replenished the hot water periodically. 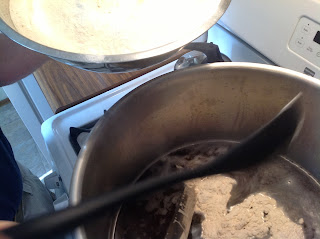 Into the rolling boil, my helper gradually poured the Dry Malt Extract, henceforth known as DME, while I stirred. DME is a lot like Carnation Malted Milk, but sweeter and stickier.

Next came something known as the "hot break." They talked a lot about this, and it was confusing until I realized what they were talking about. You know when you are boiling noodles, or making cream of wheat, or boiling up some other mixture of water and carbohydrates, and then it is boiling, and if you turn around for an instant to get a spoon or answer the phone you hear SSSSSSSXXXXXS! as it boils out of the pan all over your stove top? You know that you just have to get it past that point by stirring, turning down the heat or spritzing cold water over the foam, and then the danger is past; it safely boils along until it's done. Well that's what is happening here. A chemical change happens to the bonds that keeps it from that boil-over danger after that, or at least until you add new ingredients. 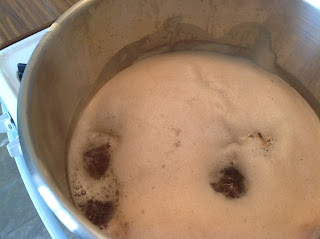 So I passed through the fire with my hot break with no boil-overs or other dangers. 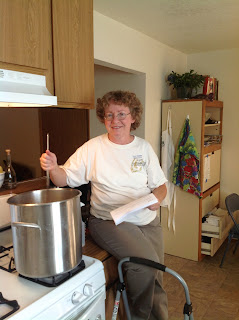 I never let the directions get very far from my hot little hands. 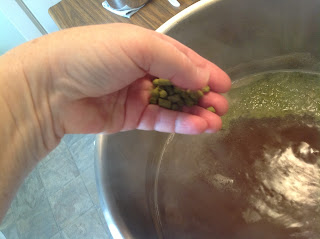 There were three kinds of hops to be added, for bittering, flavoring, and aroma. The first two were added in the middle of the hour-long boil. 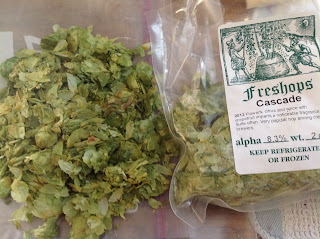 These hops were added at the end in a steeping bag. 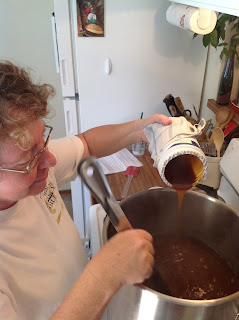 Near the end of the boil, the LME was added. (Actually, it wasn't added in a passive manner; I added it myself!)

At this point I needed to cool the wort (rhymes with "dirt," not "wart.") and cool it quickly. The best device would be a copper coiled wort chiller, but I didn't have one, so I did the next best thing. Stay tuned!
Posted by Carolyn at 3:23 PM