It wasn't to save money; no, I'd be lucky if it didn't cost MORE money. It wasn't to make something better than I could buy; I'm not sure if I could even come up with something as good as I could buy. But tell me, why does any crafter, garment sewer, baker, artist, musician, have to make THEIR OWN? I don't know why, but I know it's true. And I wanted to Brew My Own.

I yo yo between liking wine and microbrew beers the best. But I think that a good ale probably comes out on top. I have thought how fun and satisfying it would be to craft my own someday, and the day finally came. The week we moved, I found the information for the local home-brew club, portentously called the SOBs. There is another "S" in front of it that stands for Shasta, but I forget what the SOB part really stands for right now. It's probably the fumes of the yeast bubbling out of the cute little airlock on the fermenter.

I'm really not much for mixes. I made a cake from scratch by myself when I was in probably the 5th grade. I didn't know it was from scratch; I thought making a cake from scratch meant you weren't allowed to use a recipe. When I get complemented on a baked item that was from a mix, I find myself babbling apologies, that it was just from a mix, and anyone could do it, etc. and ad nauseum, though I'm getting better at just saying "Thank you." But beer making was foreign to my skill set, and I REALLY wanted my first batch to turn out well. So I bought a kit.


The kit was put together by the local home-brew shop, and was a Sierra Nevada Pale Ale clone. I went into the store with all the brew stuff I had, and the owner went through it, pulling items off the wall that I needed to complete my set-up. The one item I looked longingly at on the shelf was a wort cooler, a bootlegger-ish looking copper coil set-up that would quick-cool the wort, buy immersing it into the hot wort and running cold water through the copper pipe. But alas, that wasn't for today. It was my intention to make one myself for the next batch. One thing that was great about this local-made kit is that the hops and the yeast for it were kept in the 'fridge for freshness. And he ground the malted barley for it right then and there.

The next day was Brew Day.

I assembled the ingredients and read through the instructions. I cleaned everything again. 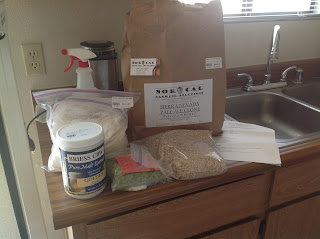 One of the best things you can do for your brew is use good water. It's no wonder that's what the major brewing companies brag about the most. It shouldn't have too many of the wrong minerals. It shouldn't have NO minerals, like distilled. And it definitely should not contain chlorine, which is what our tap water contains. I have been using a PUR pitcher system for my drinking water. It takes out all traces of the chlorine, and it tastes very nice. I could have went out and bought some bottled water, but I wasn't sure if it would taste as good as this. So I just decided to filter what I needed, which became tedious, I'll admit. 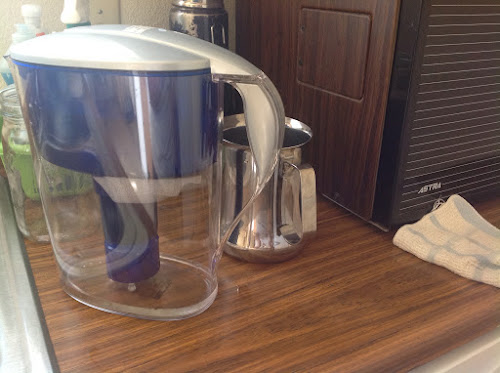 Next time, I'll taste test the purified water from the machine at the grocery store and probably get that.
I put the large stainless steel brew kettle with 2 gallons of hard won water on the range to heat up. (Thank you, Mike, for having good taste in brew kettles!) I had to take the temperature up to 157, drop in the bag of cracked roasted barley, and keep the temperature as close to 154 as I could for 30 minutes. There I found myself lacking a tool that would have made that easier--a long cooking thermometer that clips to the side of the kettle. The best one I had was a short instant read device, which I kept sticking into the water to make sure it wasn't heating up too much. One benefit was that I got to keep sniffing at the aromatic barley tea I was making. Yum! 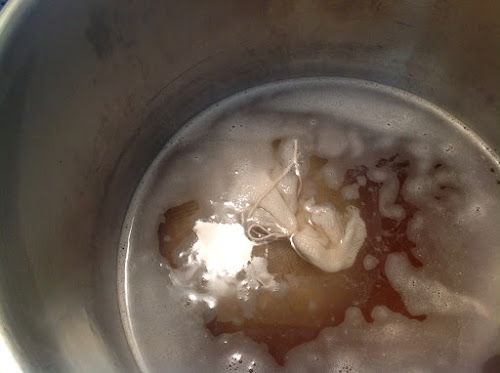 Apparently, this part of the barley stuff was only for color and mouthfeel. The serious business was the barley malt extract. That's what would feed the yeast and create the beer.

Posted with Blogsy
Posted by Carolyn at 4:04 PM