At Sky Camp, we had debated the wisdom of setting up our tents underneath the tree canopy. What I had thought of is that if it drizzled, all the dirt and bugs from the twigs and leaves would rain down and dirty up our tents. But as it turned out, , the best and level spot was directly under a huge open tree-shaded area. We went to bed so early that it was actually nice to have the early gloom of the shadows, and it looked like the morning sun might peek through the edge of the eastern side. 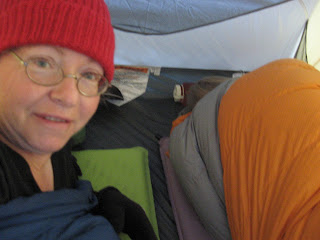 I was a little chilly that night and didn’t sleep all that well. Just warm enough to not want to give up my meager heat to crawl out and pull on my polartec jacket, but not warm enough to be comfy. Nola, who has plenty of body heat was happily commenting on how she didn’t get too warm!

As we strolled down to take the morning air, we realized what a tent pitched out in the open would have meant. The little dome tent down by the hitching rail was drenched in the morning dew! We were able to pack our dry tents and take off right after a nice breakfast of scrambled eggs or oats/granola.

About the freeze-dried scrambled eggs with bacon… all I can say is… YUM! They were delicious and moist and had a nice firm texture. Next time I’m leaving the oatmeal packets at home and just taking the eggs!

We hung the map in a little pouch from Nola’s pack so the Trailmaster would have access to it whenever she needed to check directions. 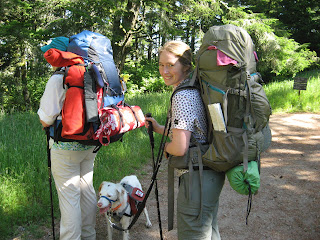 (You may think Melinda is preparing to look at the map, but she is really checking on The Chair.) 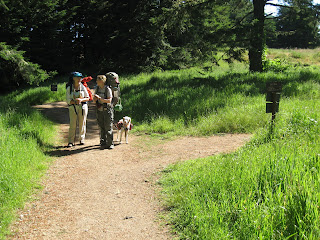 We took the Woodward Valley trail to cut down to Coast Trail so we would have as much seaside walking as possible, even though it meant a few more miles and probably more total uphill walking by the end of the day. 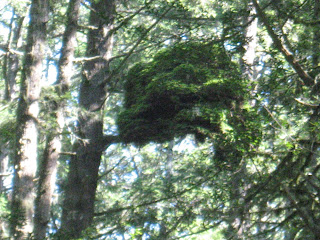 Along the trail we saw the weirdest thing, a great green mass up about 40 feet or more high up on a dead tree. The binoculars proved it was living vegetation instead of a giant green beanbag chair, but we could not see just what it was or how the leafy thing was living, perched up there on the dead spike of a conifer. 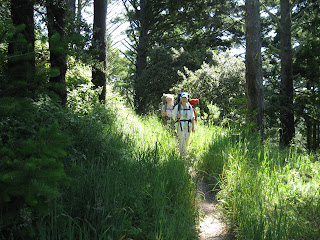 We came out on Coast Trail near the beach access to , the site of a dramatic rescue we had taken part in last year when a guy had fallen off the cliff and had lain there all night. 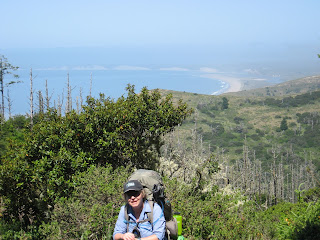 Talk about a jinxed area! There I am, strolling along ahead of my two companions, happily snapping photos when I see them pause, and then step to one side of the trail. They looked deep in thought, staring pensively down as they murmured. I’m missing this little moment! I thought, and went back to get in on the conversation. 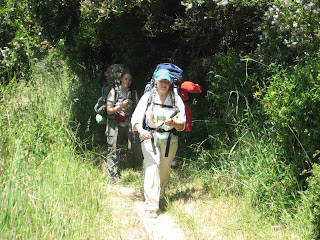 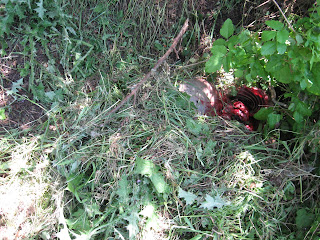 That’s when I saw they weren’t chatting, but staring at a big red blob halfway covered with a big pile of weeds and thistles. The bare bloody rib cage was my first clue that it had been a deer. In fact, it was a really fresh, large deer that hadn’t even started to smell or draw flies yet.

Melinda, the Trailmaster, also proved herself as the Beastmaster.

“Mountain Lion, probably last night. You can see it ate the heart and liver.”

That was when I remembered the last time I’d gone hiking and had some time to ponder my status as mountain lion prey. I had been going to make a small cape with big scary eyes painted on it to wear across the back of my pack.

“One good thing,” the Beastmaster said, “is that our packs protect the back of our necks.” My neck started to crawl, and we realized that the mountain lion might actually still be in the vicinity and feel protective about his dinner, so we scurried on down the trail. 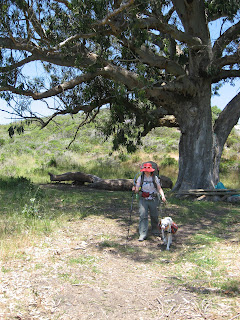 One big landmark along the trail is the huge eucalyptus tree marking the access for . That was where we were going to eat our lunch. Down the stairs we went to the sand. A lovely waterfall fell to the mossy rocks directly to one side. We took our shoes off to walk along the beach looking for a bit of a shady overhang.

Only a half dozen steps and I was running. Hot Hot Hot! I couldn’t stop to take off my pack or get my camp shoes. The only thing I could do to keep the soles of my feet from frying was to keep them off the sand, one at a time, by running. Soon I heard close at my heels, “Hot Hot Hot!” Melinda and I were running a race to nowhere. In my pain, I spied a log of driftwood that curved a few inches above the surface. A thin shadow lay under it. I aimed for it and then shoved my feet under it into the shaded sand. Melinda followed, doing the same. And then here came Nola, “Hot Hot Hot!” as she ran circles around us. “Here! Under this log!” we cried. 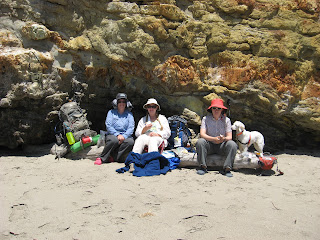 Finally the three of us had breathing room to get our packs off and our camp shoes on. 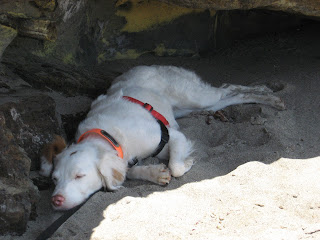 Lucky Tess is small enough to tuck herself into a bit of shade. 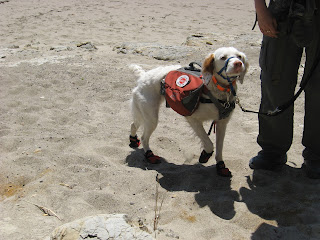 Tess gets booties to keep her from burning her paws. 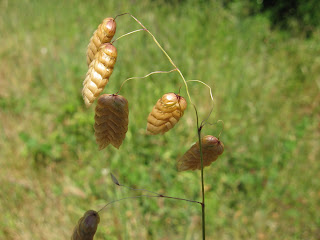 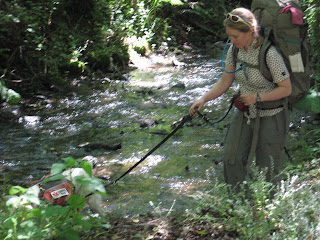 After lunch, Bear Valley Trail took us inland again and headed towards Glen Camp. We had some nice cool easy sections. 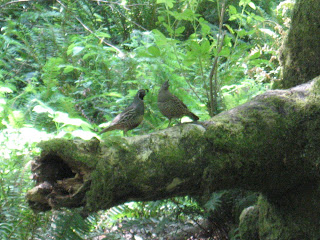 The quail were so cute! 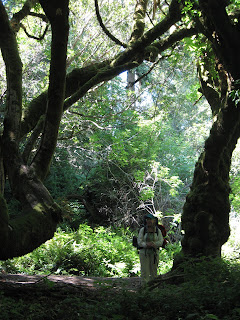 The nicest area of today's trail. 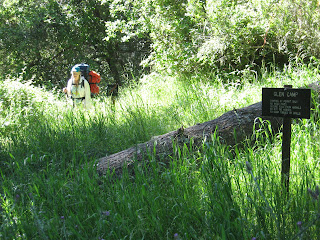 Soon enough, the trail turned steeply uphill. At this point, we settled into our jobs. My job was to say that I was sure the trail leveled out right after this bend. The Trailmaster’s job was to say that we should be there any minute because there was only a half mile to go an hour ago. Nola’s job was to watch the rear for mountain lions and take care of the chair. 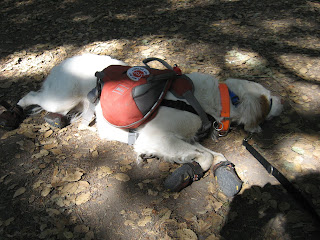 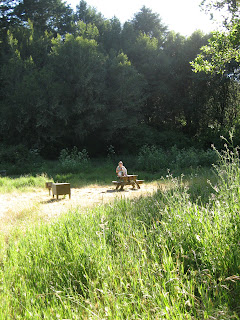 Arriving at Glen Camp was a nice reward. It is a beautiful campground, and we had it virtually to ourselves. We enjoyed time at each campsite as it spent its moment in the warm sun. 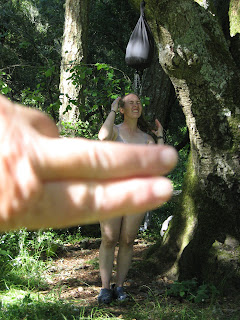 Melinda even took a shower. Thank goodness I had brought the shower curtain with the big finger design. 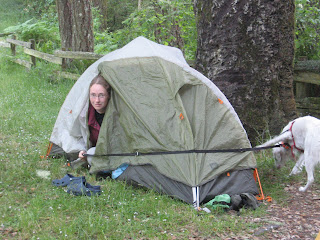 We pitched tents under the large tree canopy. We went to bed on the early side, me enjoying my ipod, Nola enjoying her book, and both of us enjoying the entertainment of listening to Tess rollicking around inside the other tent.

Just as I was about to drop off to sleep, I heard a deadly, ominous sound. Crrrraaaackkk! A tree limb had dropped off somewhere close-by. Nola thought it might be overhead. I didn't think so, but in my mind, I was already diving underneath her cushion. (I like to think I would have thought again and thrown my body over hers to protect her.) 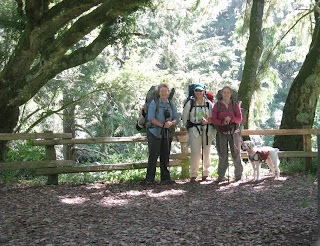 But we didn’t die, and I hope I remember the adventure and look for big limbs the next time I sleep under a tree.
Posted by Carolyn at 5:38 PM