When I was planning and packing for the Ohlone Trail backpacking trip, I had to consider two major factors: comfort and weight. Unfortunately, these two can work at cross-purposes. I hold up for your attention the Thermarest Luxury Camp Sleeping Pad. I was delighted to discover Thermarest several years ago, to the point of tossing aside all my other ineffectual air mattresses and roll-up pads for camping. When you take this thing out of its little sack, release the valve and shake it out, it plumps up into the nicest, cushiest mattress. But it also weighs about 3 ½ pounds. That was why I was agonizing over my pile of stuff. My tent weighed about 3 ½ pounds. My sleeping bag weighed about 3 pounds. My pack weighed about 3 ½ pounds (empty). I imagined myself crapping out on the trail, all for the extra weight of my Thermarest. There was nothing else I could sacrifice, so I stuck it in the closet and took my cheap, LIGHT, blue backpacking pad.

So that was why I was a wee bit chilly my first night at Stewart’s Camp. I could feel the cold seeping up from below. I had Little Hotties Hand Warmers stuck next to my cheeks between my silk long johns and my Polartec pants. I had a couple shoved in my waistband and some in my pockets. I never got cold enough for despair, though. And the trail must have been sufficiently traumatic because I never regretted not bringing my luxury mattress. And the trouble with going to bed early is that the night then becomes very very long.

We were up at first light. Breakfast was oats with trail mix stirred in and coffee. And then came the first chore, purifying water for my Camelbak.

My pump is a Katadyn Pro Hiker. I’d practiced with it before I left, and pumped some on our first day, but I was still getting used to managing all those hoses and stuff. And all the while, desperately trying to keep the “clean” hose ends from getting anywhere near the “dirty” hose ends. I could imagine the little giardias crawling around like ticks on the dirty hose-end just waiting to infect my clean hose, and then me. 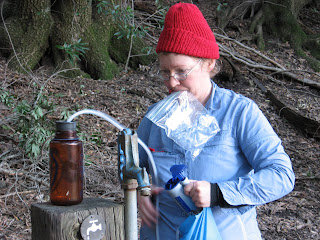 You may wonder, what is she thinking here? She is thinking, “Why the blankety-blank didn’t I bring that extra Nalgene bottle to pump dirty water out of?

I made some changes to my packout, namely, I rolled my tent up inside my sleeping pad. That gave me one less thing to lash on to the outside of my pack. But it was frustrating enough that I admitted to Melinda, “I have decided to consider, just consider! maybe having a look at internal frame packs.” She smiled at me smugly as she preened, all ready to go. “Did you happen to notice that I’m all packed up to go, and you’re still all spread out lashing things to your … uh, “pack?” Grrr! Suddenly I felt loyal to old Greenie, but that didn’t stop the fantasy of imagining new packs to shop for when I got back. 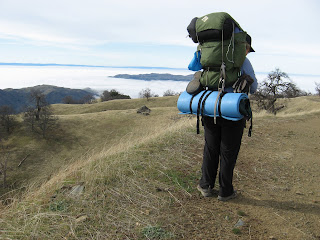 Gotta admit, it looks better than yesterday!
As we climbed the switchbacks, getting out of the shadow of the mountain, the footing was quite icy. Puddles in the wide trail had frozen solid. I knew the tread on my shoes was marginal, so I carefully walked at the edges of the trail where there were frozen clods and weed stubble. Melinda was more bold. With good tread and a stick in one hand, she boldly went forth, skittering a few times, but recovering. Until she didn’t. I knew I couldn’t do anything about it, so I just watched it unfold. First a little backwards sliding, some arm maneuvers, and then I knew she was going to go down. It was inevitable. For a brief moment she looked like a slow-motion figure skater and then did a careful “emergency dismount.” I allowed myself the briefest chuckle, since it was likely the only one I might get on the trip. But I think we both spent the next quarter mile imagining the trauma of slithering right off the side of the trail. It also made me think about my sleeping bag squirting out of its lashings again and falling off the side of the trail. Shudder!

We experienced something new this day, going downhill. At first it was fun. It was novel. But then two things happened. Melinda had the topo map and realized that for all the downhill we did, we would have to make it up with an equal uphill. Yikes! And I also realized how uncomfortable going downhill can be. 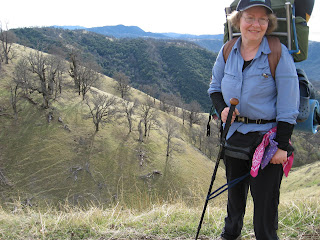 Not long after we had started the hike, and were already on our second rest break, with the start of the trail still in view, Melinda shared a tip she had read about, called “resting while you climb.” The way it goes is, instead of putting out steady effort and then stopping to rest and stiffening up, you take advantage of the moment of maximum rest –when both feet are on the ground and hesitate just a bit before pushing off again. It looks pretty weird, but it worked miracles! We could actually carry on conversation while we hiked up and although it was slow, I think we made as good time as the regular style walking.

But it was hard to find a comfortable way to go downhill. Strange muscles began to hurt, and I wished I had thicker socks so my feet wouldn’t jam into the ends of my shoes and rub my toes.

The land around us was starting to change. We had hiked through mixed oak and conifers, with mossy streams and lots of undergrowth, and now we were moving into grassy, oak-studded rolling hills. A slight misty air softened the far-off contours of the landscape, and the low winter sun lent a mystical sensation to the view. Not for the first time, I felt like we were hobbits, traipsing through the wilderness. I felt a kinship with Sam, all his pots and pans and crap tied to the outside of his pack, clanking and swaying. 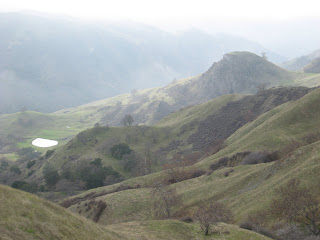 At the last minute, we agreed that we had a perfectly good view to the west right there on the trail, that we didn’t need to climb that extra loop to get to the top of Rose Peak. 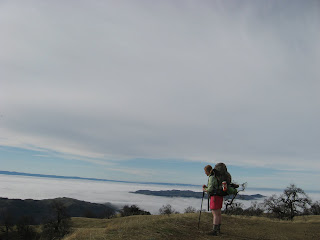 This was where we met the first person we had seen on the entire trail, a day hiker.

Though it was still the middle of the day, we were becoming anxious about reaching our campsite before dark. Melinda was keeping track of the mileage we still needed, compulsively pulling the map out every 15 minutes to read it, which allowed me to carry on blissfully. She was worrying enough for both of us.

It was a funny thing about our lunch stop. We had agreed to walk another 20 minutes, but coming around a corner, the trail looked like it went straight up after a short level space. We gasped and then agreed, “It’s lunch time!” I went through the whole thing with my pack again. Just pulling it off and dropping it made things start coming apart. I dug out my food sack and sat amidst the chaos while Melinda neatly removed what she needed from her upright stationary pack. The day before, we had summer sausage, cheese, and trail mix for lunch. Today we heated up tuna, cheese and boil-in-a-bag rice. Of course that took longer and made for more clean-up, so we were really anxious to get on the road. 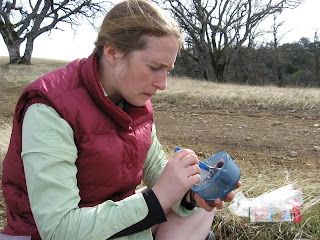 Now it was time to put on my pack. I couldn’t believe how heavy it still was! There wasn’t a good place to get a grip on it. There was no handy log to rest it on while I slithered in to the straps. I finally got one side lifted to one shoulder and was stuck. Melinda just stood there, obeying our mostly unspoken rule that we had to pretend “What if I’m here all by myself?” I’m sure I was jerking and waving my arm around when, Horrors! The day-hiker appeared on the trail.

“No thanks! I’m self-sufficient!” I think I said. I put forth a massive effort and shifted it onto my back. He had an amused look on his face as he went on by.

Now here’s the strange thing about our lunch stop. We were already near the top of the slope of the trail before we realized it was the same slope that had demoralized us before lunch. Just goes to show how being tired can mess with your state of mind!

The terrain continued to change as we lowered in elevation. We passed through cow pastures on cow trails. We went up, then down, up, down, repeat. It got later and the sun got lower. Would be arrive at the camp before dark?

And then, there it was. There were 5 little camping spots, just out of view from each other. They had cute names, like Eagle’s Aerie, and Hawk’s Nest. We could see a male bonding group up at Eagle’s Aerie, throwing wood on a forbidden bonfire. We chose Hawk’s nest, which seemed most convenient to the water supply and, in the other direction, the outhouse. 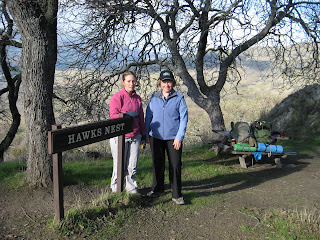 We gratefully started piling our stuff on the picnic table, an unexpected bonus. Melinda felt the need to excuse herself from enforcing the “picnic table rule,” which means ignoring picnic tables because you shouldn’t expect them to be there at a backpacking camp. 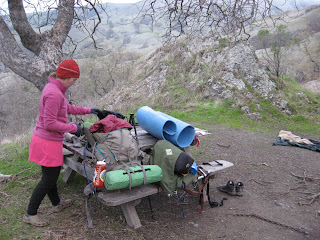 I think she mumbled something about us being tired and that it was sort of like putting the stuff on the ground.
Tonight was a little warmer than the previous night, but a fog was falling. I wore my raincoat for a little extra dry warmth. We prepared a most delicious dinner, chicken tortilla soup and instant potatoes, made some hot tea, took some ibuprofen, and played a hand of Siberian Rummy. 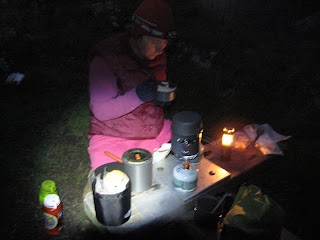 It was still early, about 7:30 or 8, but it was cold, we were tired, and our sleeping bags were inviting us in.
As before, it was a quiet night. Thank goodness! I don’t know how I could have stood it to hear animal noises and rustlings and odd howlings. The only noises were from the jets overhead, as we seemed to be in a flyover zone. But that faded away as the night wore on. Melinda tells me that I was talking in my sleep, but since I didn’t hear it, I’m skeptical.
Posted by Carolyn at 12:01 PM