I remembered about halfway through making this chicken recipe that some time back I had decided not to make kebabs any more, and why. I am sure there are reasons why one would go through the process of cutting up pieces of food, thread them onto metal spears, flip them around trying to cook them evenly, and then just slide them off onto a plate to eat them, when one could throw big chunks right on on the grill and then cut them up on the plate. Perhaps you are camping and there is no grill handy, so the food goes on a stick, or perhaps you are camping and forgot the plates and have to eat the food directly off the stick. Anyway, this recipe looked good, and fairly quick and easy, and I forgot what I decided about not doing kebabs.

The problem with the effort these took mostly lay in the fact I had determined to follow the recipe in the book. If I had been making this up as I went, I would have decided to go Greek, and said, "Tzatziki sauce, ok, a bunch of Greek yogurt, some lemon juice and garlic and salt to taste, and then stir in some cukes. Hmm, let's see, what sounds Greek for a marinade? Olive oil, lemon juice, and let's see what green herbs sound good. Guess I better light the coals!" Instead I was jumping around all over the page following the specific instructions for each part of this recipe. Plus going back to the the "why this recipe works" intro for those specific little bits that aren't tucked into the recipe itself.

I had never brined anything before, and this looked like an easy way to check it out. It called for boneless skinless breasts, which I wouldn't have used because they would likely have gotten dry and maybe overcooked on the grill. 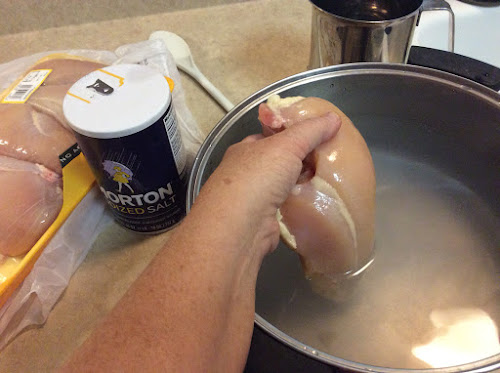 After they had almost been in the required 30 minutes, I saw that they were supposed to already be cut up in 1" chunks. So I did that and threw them back in the brine for a while longer. Meanwhile, I made up the oily marinade. 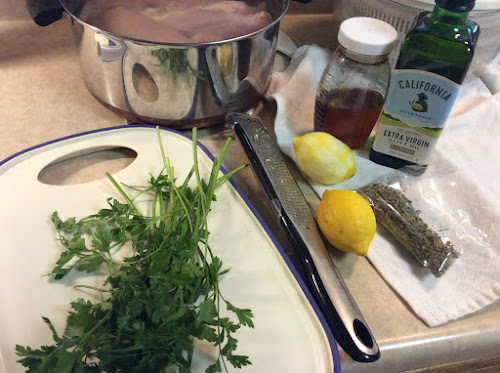 It called for minced parsley. I went ahead and got Italian flat parsley since I already knew I didn't much care for the regular stuff. Turns out I don't care for this either. The odor is sort of strong and medicinal, and bitter. Just like the other parsley, only a little more tender. So I measured out and put in the small amount it called for, even though I had a big bunch that was going in the trash after this. 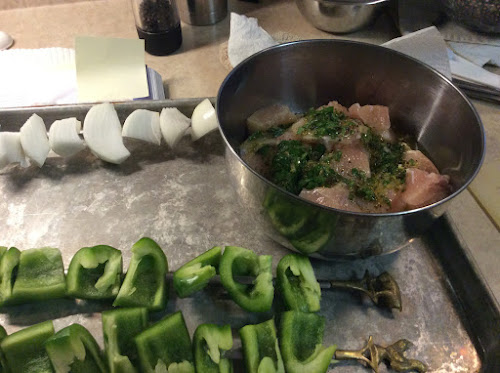 One thing I retained from my previous kebab days was the habit of putting the different things on different skewers. I like the better control of the cooking process. Even if the book says to do it the other way.

Onto the hot coals! Instead of piling them on one side, I left the hot spot in the middle and moved the sticks off to the side when they needed slower heat. I used an instant read thermometer to make sure I didn't cook them a minute longer than necessary. 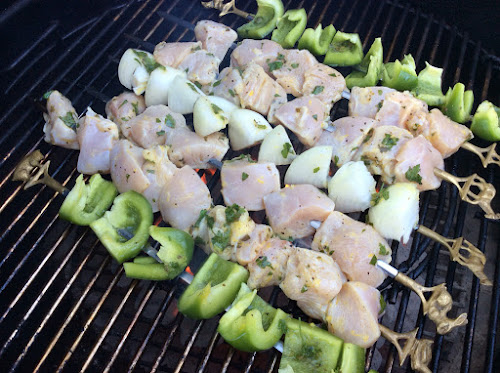 Aren't these skewers the cutest? Plus, they are flat so the food doesn't twirl around when you turn them over. 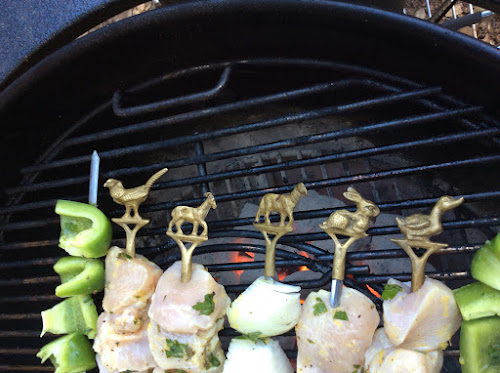 My sister gave them to me, and each one is different.

I had more chicken than I needed for the recipe, so I did a second batch slathered with leftover home made pesto. 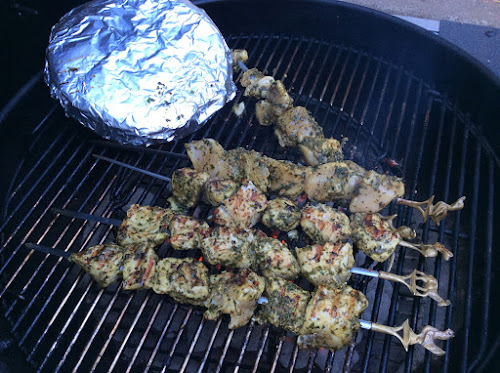 The pita bread is wrapped in foil. I followed the instructions to sprinkle a bit of water between two of the four breads to soften them as they steam. Grocery store pita can be sort of inflexible and dry.

I made the dressing following the recipe, except I couldn't bring myself to use chopped mint. I like mint in mojitos and tea. Not food. I pinched in a little oregano to make up for the omission. 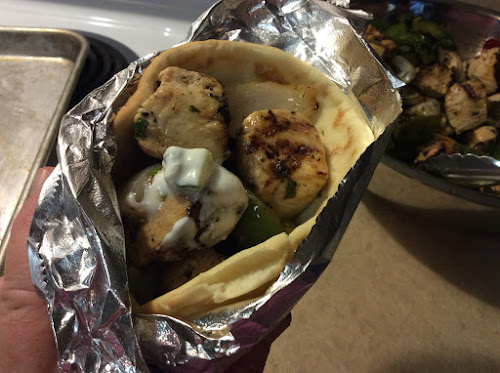 In the end, they were very delicious. The chicken was moist and tender, and the seasonings all complemented each other. And I used little foil squares like the illustration to keep the Tzatziki off my hands. See? Looks just like the picture! (Except I used yellow onions instead of red. Always changing something!

Posted with Blogsy
Posted by Carolyn at 10:22 PM