My aim is to have fish on Fridays. Fish is supposed to be good for you, especially salmon, and we have a great meat market, so I like to try to do that. This little recipe seemed worth a try. Fish wants to fall apart on a grill, so the method the book comes up with makes me want to try it.

You make little foil pans for each piece of the fillet to ride in as it sizzles and makes grill marks through the foil.

I went to R&R Meat and Seafood Market and got a nice fillet of fresh coho salmon. The directions said to pull out the pin bones, which I usually do anyway, and to skin it. It was not as easy to cut the fillet off the skin as I'd thought it would be, especially since I was trying not to abandon even a sliver of $10 a pound salmon on the discarded skin. 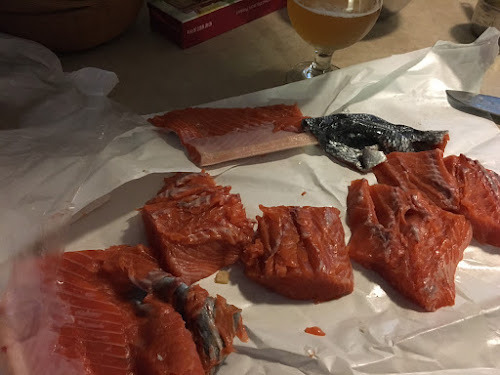 The thin edges, I just left the meat on the skin and planned on cooking them on a foil, as is.

The sauce, I found intriguing. I called for 1/2 c jalapeño jelly, 1/2 c packed cilantro, 2 scallions ( I used a shallot, since that is what I had) 2 garlic cloves, 1 t grated lime zest, 2 T lime juice, and 2 T butter. You blenderize everything except the butter, heat it to barely a simmer, take out a quarter cup of sauce and set aside, then stir in the butter to the rest of the sauce. The small amount of sauce gets spread over the fillets as you lay them in their little foil boats.

The grill gets a pile of hot coals in the middle. 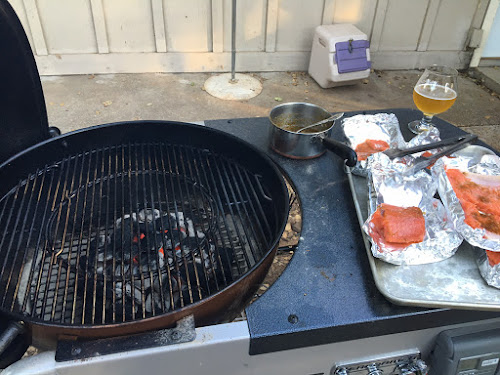 The boats get laid. On top of the coals, of course! 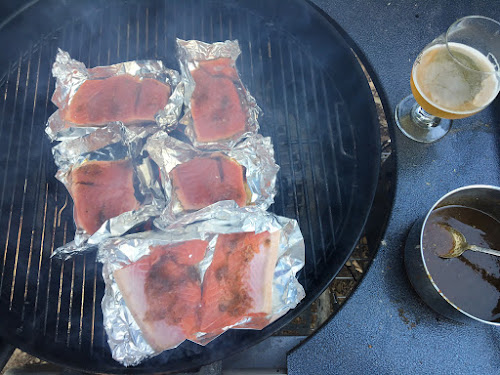 They cook and sizzle smartly for about five minutes, supposedly getting crispy and brown on the bottom. Then you are supposed to turn them over with tongs, coat them with half the rest of the sauce and move the boats to the cooler edges to finish cooking. 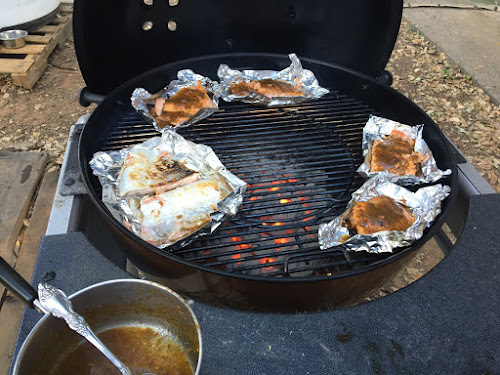 It didn't go as smoothly as I'd wish. Fish is so delicate and quick-cooking. Because of the sugar in the glaze (from the jelly) it did want to blacken a bit, so when you saw the burned edges under the fish, you wanted to check the underside. But then you saw it wasn't crispy yet, just steamed looking. And the coals were really hot for hanging over it with tongs. So I moved them around and messed with them until I was as satisfied as I thought I could be.

So I pulled them off the grill and served them with a mushroom and homemade pesto linguini my son fixed up for me. 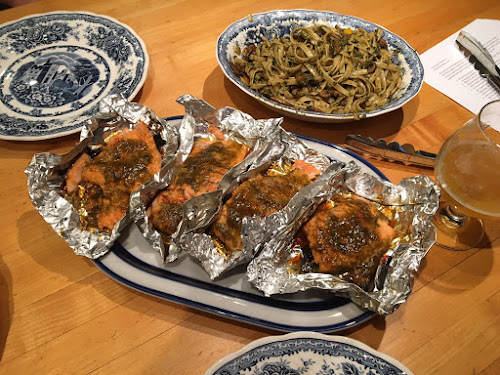 They were ok. I wasn't prepared for how sweet they would be. We all agreed that the cilantro came through loud and clear. They were nice and we ate them all up. But my personal opinion was that they were too sweet for my taste, the flavors in the sauce were too busy arguing with each other to meld and get along on the palate. And the fuss of making them on the grill was much more than the reward was. I think I'll try one more salmon recipe I see in this book, and then I'll probably go back to just cooking my salmon fillets in the oven.

Posted with Blogsy
Posted by Carolyn at 9:57 PM