MOG - Burgers for Everyone, pg 6

I was surprised to see that the first item in the book, Great Backyard Burgers, call for an internal temperature of only 120 degrees for medium rare! I just don't trust rare hamburger that much, and I thought it was universal by now. But the instructions for the burgers on the next page are led by "These days, many backyard cooks prefer grilling burgers to medium-well and beyond." Yup! This recipe is for me! But the problem is, as they explain, that when you cook them through, they can end up dry and tough. The rescue is a "panade," a mixture of starch and liquid. You will recognize one form of that as ingredients in meatloaf. But I didn't think about the science of the thing. "Starches from the bread absorb the liquid from the mild to form a gel that coats and lubricates the protein molecules in the meat...keeping them moist and preventing them from linking together and shrinking in to a tough matrix."

The other suggestion I followed in this recipe was to use 80 (lean) 20 (fat) ground beef, rather than the 85/15 I usually buy. It's America's Test Kitchen, after all, and they said it won the taste tests! 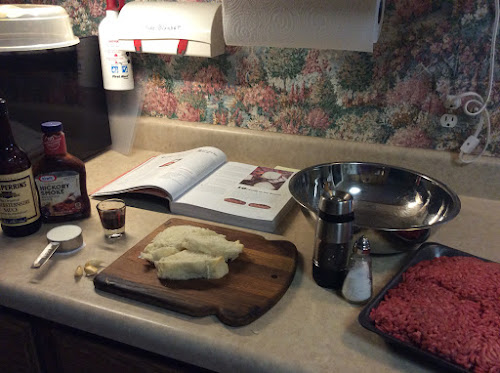 I doubled the recipe. After all, who goes to the trouble of a charcoal grill for 4 burgers?

A couple pieces of white bread, crusts removed, mashed in a bowl with a quarter cup milk. About a tablespoon and a half of steak sauce - Whoops! no steak sauce in the fridge, so I used a couple teaspoons Worchestershire sauce and a couple teaspoons sweet barbeque sauce. Add in a couple of minced garlic cloves, a teaspoon or so of black pepper, and a teaspoon of salt. ( I always reduce the salt in these kinds of recipes by about a third, which seems to work best for my tastes.) 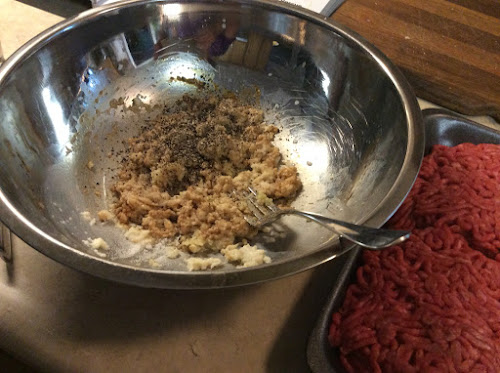 Then you sort of fluff the meat in to the mix. Sort of mixing, but not heavy-handed. Finally, to do it right I had to abandon the fork and do it the old fashioned way, with my fingers. 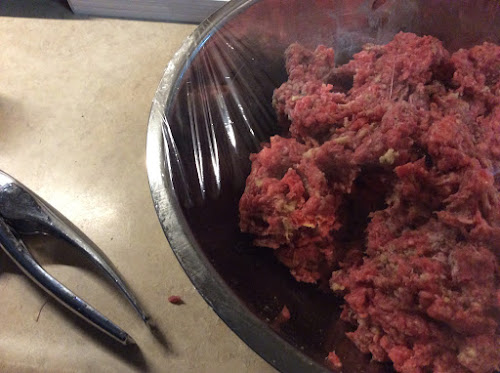 Then, as the directions say, you lightly toss each portion from hand to hand, into a ball, then gently flatten. Sort of fun. My husband was amused, and it made a satisfying plopping sound. The last thing to be done was to press a dimple in the middle.

The dimple works. I've noticed this from before. If you don't make a dimple, the burger puffs up like a flying saucer in the middle. Because the bottom and sides are both cooking at once, the sides compress the middle like a belt, squishing the burger up towards the path of least resistance, the top.

Meanwhile... The grill. Because my fancy new Weber has a gas canister starter for the coals, I didn't need a chimney, just dumped them in and sparked the gas. The pile of coals, when ready, went onto one side of the grill, for maximum heat. 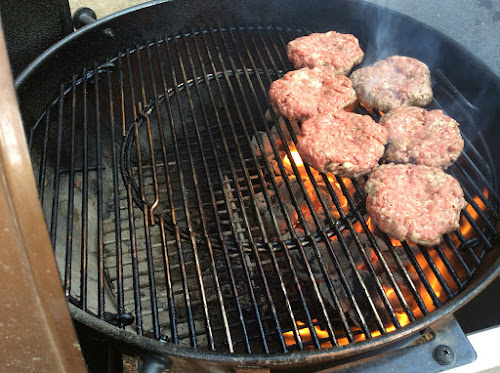 There was lots of flamin' and searin' going on, and I was careful to keep an eye out for total conflagration, but it seemed to be ok. Once both sides were quite dark and crusty, I did move them over off the briquettes to finish cooking a bit. I plated them when the instant read thermometer read 140-145, as per directions, even though I saw some pinkness. (Slide it in sort of top and sideways to get maximum temperature reading exposure) 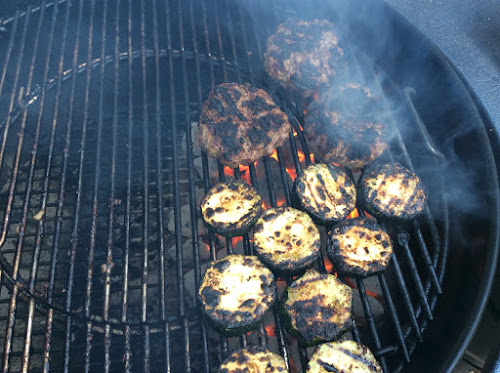 A few seasoned zucchini slices went on with the last batch. 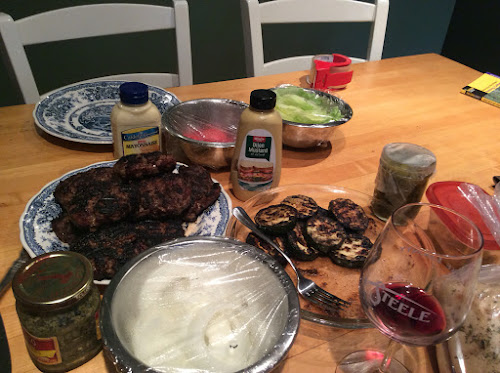 By the time we were ready to eat, all the pink had disappeared and the juices weren't boiling anymore. The burgers were dark and crusty, and tender and moist. They were also quite thick. Although I had some trouble keeping some of the burgers together when I turned and moved them around on the grill, now they were sticking together well enough. 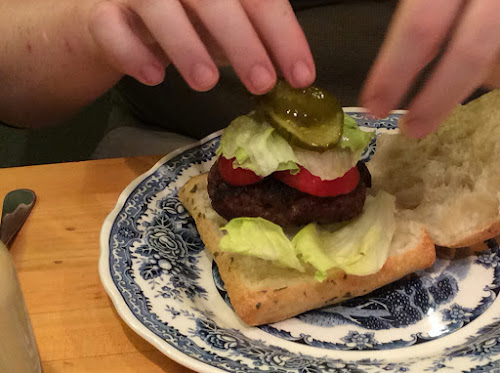 They were seasoned just right. At first it seemed like I should really have gone to town with the spices during the mixing, but I realized this was a better way, to let the flavor of the beef, the char, and the condiments shine. And I'd have to say, some of the best burgers I've had!

Posted with Blogsy
Posted by Carolyn at 2:17 PM