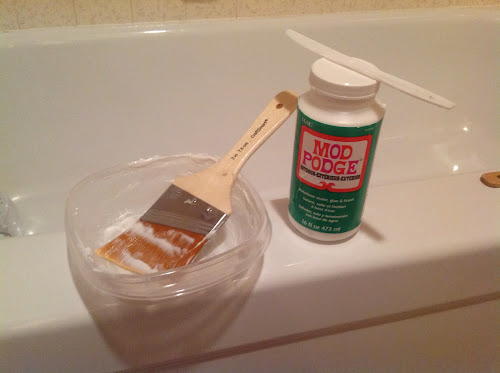 Maybe not extremely interesting a post for me being gone so long, but quite exciting for me. The house we have came with one shower, and one tub. The tub looked like a good start for making it into a shower also, but I wanted to do it quick and I expensively, and not have to get inside any walls looking for the back door to the tub fixtures.

I researched and discovered that I could replace my tub nozzle, which screwed off, with one that had an outlet for a hand held device. After that, we just had to mount a holder for the hand held wand up on the wall behind the shower. 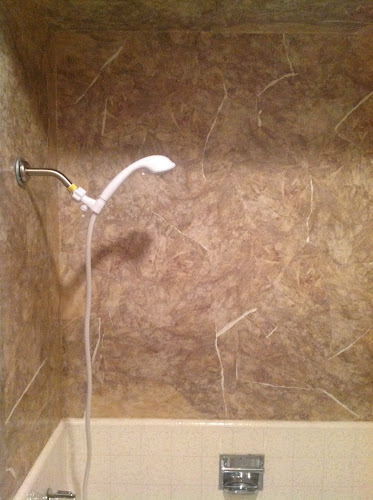 I looked for some panels that I liked but just couldn't find what I wanted at a price I wanted to pay. Plus, just thinking about the effort to put them up nicely made me tired. I knew that I would be the only regular user, so I could afford to have a system that needn't hold up to hard useage. The wall was covered with wallpaper, vinyl coated, like most modern wallpapers are now. But it was applied in an odd way. To mimic the look of stone, pieces were torn and then applied like collage. I thought that if I could come up with some sort of heavy, clear, waterproof product, I could paint it on and that would work. I hunted back through my past life and remembered how we made pictures in 8th grade art class using Mod Podge. And I knew it was still available.

When I looked in the arts and crafts store, I found they had an outdoor version. I knew that would be the most waterproof of all, so I bought a jar and some wide craft brushes. It was stiffer and gookier that I had anticipated, a lot like dried-out glue, but it went on ok. I needed exactly 2 bottles of it to put on two coat.

I let it dry for a day, and it worked! I just gently towel it dry after use it, to keep any soap scum or water deposited from building up. Since the shower wand is so downward direct, not that much water gets up on the wall anyway. One of the pictures shows the shiny edge that marks the beginning of the shower area. 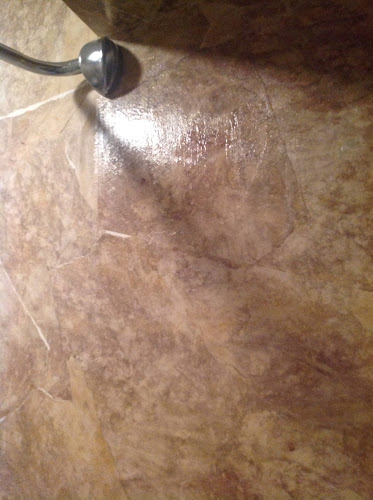 You can see the edge of the curved rod we installed.

Posted with Blogsy
Posted by Carolyn at 12:34 PM