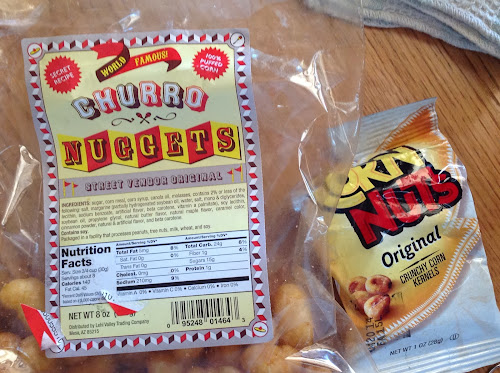 We get so used to thinking that the familiar goodies we pop into our mouths are really food, just because they have flavor and fill us up, that we forget-- they are not food. I like the term I heard once, "Edible Food-like products. I ran into one of those the other day, and it jumped into my grocery bag. Or it might have not, I dont remember much about the event. I only have a foggy impression of eating a few samples from a dish at the check out counter at World Market, and then I was walking out the door with the bag of Churro Nuggets in my sack. I vaguely remember a half off sticker on the bag, which might have helped.

After I crunched down on one of those, well, crunch things, I swear I could literally feel dopamine trickling over the pleasure centers of my brain. The lady before me had spilled about a cup of them on the sale ads beside the sample dish. It's only polite to take one or two from a dish of samples, but the ones on the newspaper were fair game. I felt like a dog wolfing up the salami someone spilled from their plate, trying to get it all before someone cleaned it up. I felt like snarling, "Slow down! Give me some time!" to the clerk who was holding out her hand for my money. That was probably the point I threw the bag of Churro Nuggets out for her to ring up for me.

Can I describe them? Sort of like caramel corn, sort of like Cheetos. Sort of like that fried cinnamon flavor of churros. And about the size of the end of my thumb. And what is in these golden bites? One of the descriptions printed in a red exploding star says, 100% puffed corn. I'm surprised the food police don't make them use a black Sharpie on that. The other red star, beside the ribbon that says "World Famous" says, intriguingly, "secret recipe." The secret must be in the cooking of them (fry, dip in cinnamon sugar, fry again?) because the ingredient list is directly below.

And then the plethora of chemicals, etc, that make up the other 2%.

Salt, margarine, (which has its own ingredient list a mile long) soy lecithin, soybean oil, propylene glycol, natural butter flavor (which means it is unnatural or they wouldn't have felt like they had to say that) natural maple flavor (ditto) caramel color (which sounds ok only because of the word "caramel") cinnamon powder, natural and artificial flavor (someday do some research into the world of flavorings) and beta carotene.

Eating these things is the closest I have felt to the way a smoker must feel about his cigs. I hate them! I must have another! I should throw what's left away. But then I pull out "just one," and it's over. The only good thing about them, I think, is that they go great with a banana.

As a comparison, I have photographed a package of a "food" snack beside the EFLP. (Edible food-like product) I like Corn Nuts. They are crunchy and bite-sized. I like to suck the salt off one, softening it in my mouth, nibbling the little kernel out, scraping what's left with my teeth, and then finishing it off. Then I might eat another one. A bag might last me awhile. Unless it has spicy fake cheese flavor on it. Then might eat more of them. But I would NEVER scrape them off the newspapers on the check out counter gobbling them up before I got kicked down to the bagging end of the line.

As for the ingredient list, it is: corn, corn oil, and salt. And when I look at them, I can see what they used to be in real life. That's kind of nice.

And no exploding red stars.

Posted with Blogsy
Posted by Carolyn at 12:44 PM