When I last left you, I was lying in bed, listening to the whisper of frozen dew pattering on the fly of my tent with the background of the cold soughing wind through the pines. I was wearing all my clothes and kept trying to arrange my raincoat to stay on the top of my sleeping bag. To amuse myself and hasten the approach of a reasonable sleepy-time, hopefully closer to 9:30pm than 7:30pm, I played a couple games of solitaire and wrote in my backpacking journal. I'm not sure what my tent-partner was doing, but I think it had something to do with a trashy book and a red light headlamp. I tried that once, but all of a sudden I had several blank, white playing cards, so I switched back to white light. 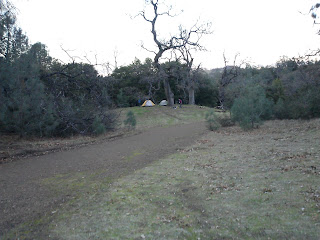 When the long night ended and the glow of dawn replaced the glow of the full moon through the nylon tent, I crawled out the zipper door, anxious for that first glorious cup of hot coffee. Now it was time to fetch water from the water pump across the trail. 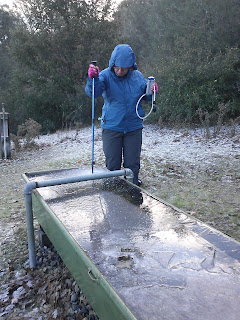 I became concerned when I realized the pumping handle was at the top of a four foot metal water pipe, no doubt frozen up. After trying in vain to bring water up with the pump, we turned our attention to the watering trough standing handily by. It was actually very beautiful. The thick ice on top was clear, revealing an amazing variety of aquatic life. Different shapes, sizes and colors of vegetation filled the bottom half of the metal trough, looking like a salad under glass, or maybe a coral reef under ice.

I chipped away until I made a hole big enough to drop the filter intake hose into and began collecting our day's water. At first I was quite concerned when I saw that the water trickling into the Nalgene bottle was hazy, until I realized that the water was slushing up as it ran into the bottle! 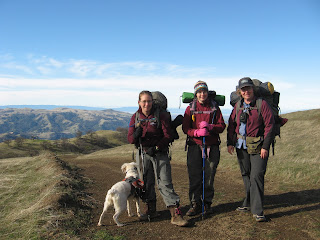 It felt good to get back on the trail after packing up, trying to keep my fingertips from freezing. Just before I pack up my cook set, I make up a hot cup of coffee for my insulated plastic mug, snap the cover on it, and then hurry up to get ready so that I can have hot coffee to sip on during the first mile of the hike. How wonderful! One reason to spare the few ounces for a cup like that!

I felt guilty when I saw that our trailmaster had persuaded Loreleigh to pull out her own map to see where we were and where we should go next. I KNOW that I should be more in touch with that part. After all, what would happen if they should both keel over all of a sudden and I had to figure it out then? Next time I shall find a place for my reference map that is close at hand and doesn't involve gymnastic arm movements to reach the top pouch of my backpack.

I was glad when I saw lunch called. We had a nice little overlook to the rolling hills and a dead tree to plant ourselves next to. 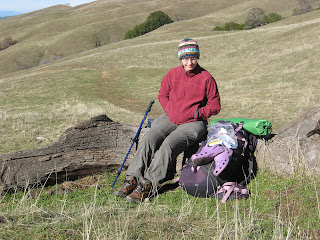 The best use, of course, was for our chair-less companion to sit on. 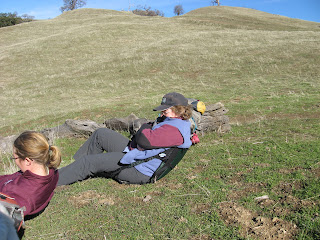 Melinda shared her most surprisingly good freeze-dried chicken salad. It was a little soupy, but savory with some onions and mayo-type stuff. And best of all, you use cold water to make it up.

Then we had the most pleasant conversation I could imagine having. The subject? Favorite candy bars suitable for trail treats. We agreed that chocolate was not conducive to summer hikes, so we should take advantage of chocolate candy bars in the winter.

My lists:
Chocolate-
Twix (#1!)
Milky Way (I used to like Snickers better, but now I seem to have shifted, even though I love nuts)
Charleston Chew (The dollar box of minis is the best and easiest to eat)
M&Ms (I think I would only bring the peanut butter ones, they are kind of cool)
Almond Joy (It's funny how much I used to hate these. I could identify with the author of a candy book who compared the texture to eating fingernail cuticles. In fact, I never even traded these at Halloween. I just gave them away.)

Non-Chocolate-
Big Hunk (#1! I've always loved Big Hunk. My only regret is that the nuts peanuts rather than almonds.)
Peanut Brittle (Well, specifically, See's peanut brittle.)
Payday (Love that mix of sweet and salty!)
Sugar Babies (Haven't had those in years, but it was pleasant to sit there and imagine having a sack of them)
Sesame Snaps (Maybe.)
Famous Amos choc chip cookies (OK, so they aren't really candy, and they do have some chocolate in them, but since I don't have a cookie list, I'm including them in their little, round crunchy goodness.)

It began to get chilly as the sun moved across the sky, so we roused ourselves to set out again.

Got into Sunol Camp, Hawk's Nest, with enough time to have good, thorough discussion about what was level, and who got to put their tent on the most level spot. 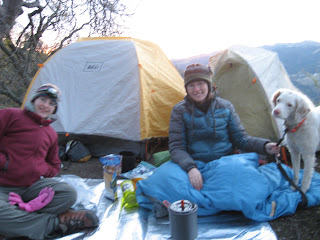 We squeezed right up next to each other, bumping up against the base of the Big Rock formation.

After a water gathering and pumping and filtering party, we began the preparations for our feast. 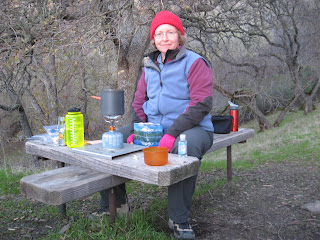 No reason to hold any dinner food back at this point, so we had decided to have a potluck.
I cooked up my Mountain House Turkey Tetrazzini and a bag of instant mashed potatoes. I don't usually cook instant mashed potatoes at home, and I don't use the plain ones anyway. But those maroon-colored bags of them that have flavors like, "Loaded," "Baked," and "Homestyle Buttery," are just flat wonderful! 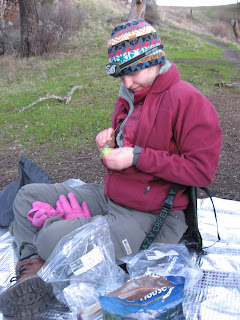 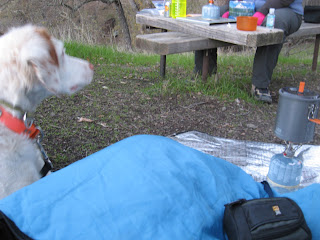 Tess knows she'll get some if she's patient. Or even if she's impatient, I expect.

We stuffed ourselves and discussed the merits of each. I had not expected to enjoy the spaghetti as much as I had. In fact, I think I prefer it over the lasagne. Tonight, the lasagna seemed to lack the splendor of the other night. Perhaps I wasn't as desperate for a hot meal this time. The others weren't impressed either and were annoyed by the stringy cheese that stuck to the spork. I thought the Turkey Tetrazzini was excellent, though a wee bit more mild than I would have preferred. We all snarfed up the potatoes, and Tess got to lap up what Melinda spilled. (Ok, I know she is going to come back and say I spilled them. When the drop happens in mid exchange, it's really a toss-up who did it.)

Then from somewhere Loreleigh produced a handful of chocolate truffles and passed them out. I quickly made a hot cup of decaf Via to match them properly with, and then I enjoyed my treats.

Then we sat around with our full bellies and graded our meals.

We gave the eggs with bacon a good, solid "B." You kind of feel like there was a limitation on how good they could be, that they could never truly be like eggs, but for what they were, they were good. We agreed that the chicken salad mix got an "A" because it tasted good, but mostly because it was so easy to make, and lightweight in the pack. Then our grades diverged. There was some difference of opinion here, since both the girls are gluten intolerant. What with the pasta in some of the meals and the bit of flour in the brownies, by now they were not feeling as charitable about the meals as I was.

Now it was time to roll ourselves off to bed. Actually, it was too early, 7:15pm, but it was cold and we were tired. Melinda handed out the New Years Eve surprise she'd brought. Hats! 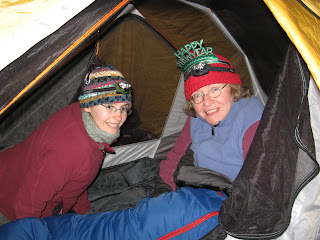 We were more than impressed with ourselves!

Tonight, I also slept with all my clothes on, but this time I put my fleece pants over my hiking pants so I wouldn't have to pull anything off to put anything on to get ready in the morning. In fact, that is one thing I learned on this trip. Layer so that you never have to do that--only take stuff off OR put stuff on!

After chasing my slithering solitaire cards all over the gently sloping floor of the tent, I again wrote in my journal, this time putting a big star by it, "Only bring OLD playing cards!"

I was nicely warm during the night. That was good. Better than being cold AND sliding down against my tent mate and inchworming back up to my side periodically.

Stay tuned for the conclusion, Part 4!