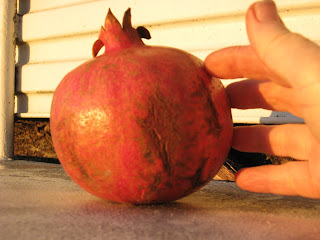 Pomegranate juice is probably one of the most difficult fruits to try to figure out how to extract the delicious, healthful juice. With the numerous, seemingly random clumps of ruby seeds inside the membranes and pith, they seem a little mysterious. Most people remember the Greek myth of Persephone who had to stay in the underworld for 7 months each year, one for each pomegranate seed she had eaten while down there. When I was a kid, we periodically made pomegranate jelly from the wild pomegranate trees growing around our house. On one memorable juice-making process, I remember most the roasting pans and potato mashers and splatters.

Over Thanksgiving weekend, I got several boxes of huge ripe pomegranates from my father-in-law with the intention of making juice and freezing it. The one part of my previous experience I didn’t want to bring back was the potato masher. After calling around and not being able to locate a pomegranate juicer I stirred up the creative juices to see what I could come up with. I needed something to crush the seeds and then extract the juice.

After building about a half-dozen devices in my mind, I thought I’d start with my Kitchen Aid meat grinder attachment for my mixer. I’d been concerned that it would crush the little white seeds inside, but on a test run, I had no problems, using the coarse grind blade. The seeds were crushed so thoroughly, it didn’t take much work at all to strain out the juice from the pulp. Hooray! Now I could start in earnest. 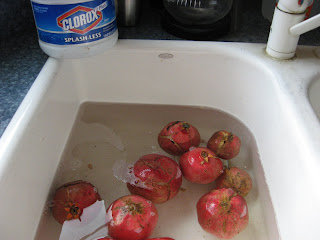 To begin with, I rinsed the fruits in bleach water in the sink. I didn't want bacteria from the rinds making their way into the juice. 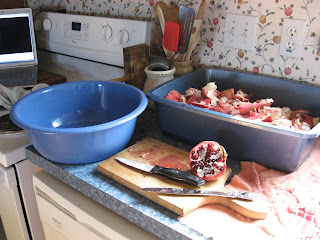 Split the fruit open from the north to the south pole. That makes the seed clumps easier to get at. Do not just cut it open! Too many seeds would be cup up. Score the rind all the way around and break it open. If you need to, slide the edge of a butter knife into the gash and twist it to pry the halves apart. 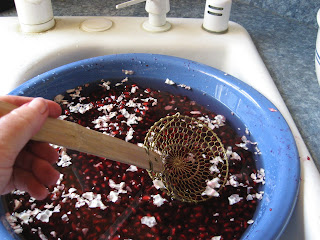 After the seeds have been gently worked out of the fruit and dropped in a pan, fill the pan with water. The seeds will sink and the bits of membrane will float. Skim them out. 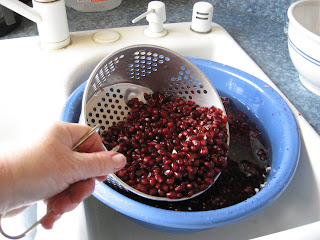 Strain out the pomegranate seeds from the water and put them in a bowl. This is the coarse plate for my Kitchen Aid food grinder. The holes are about 1/4 inch in diameter. The majority of the white seed pits pass right through without being crushed. 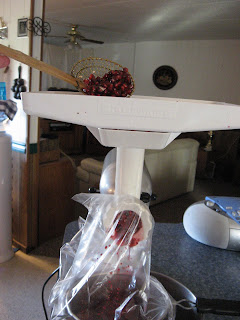 After dealing with spatters running my first batch through, I tore a small hole in the bottom of a plastic sack, fed it through the exit end of the grinder and then screwed the front disc holder back on. That kept all the juice where it belonged. I ladled the seeds slowly into the hopper with a strainer and let the crush fall into a sieve over a bowl. 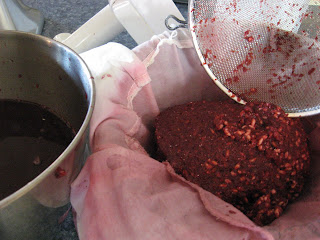 Most of the juice strained right through into the bowl. I dumped the pulp into a colander lined with a cloth and pressed the rest of the juice out. The pomace was quite dry. In fact, most of the juice just drained out naturally. I think I may skip squeezing the pulp in the future. That will help avoid the sediments, which are hard to remove. 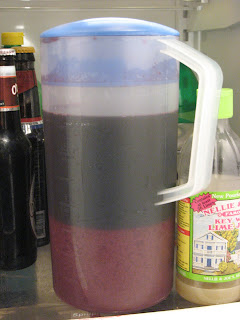 This is NOT one straight pitcher of juice. After I poured off three pitchers of juice into freezer jars, stopping when I got to the sediment layer, I combined the pitchers of sediment layers into one. The next day, the juice had settled further. I poured that off and then strained the sediment layer through cloth. The clear juice tastes best, so it is good to separate it out. I'll see with my next batch how much less the sediments are when I don't squeeze the pulp. 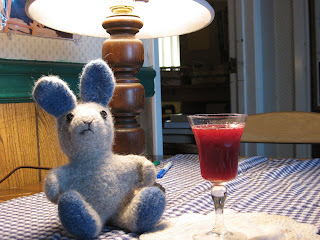 As is proper, Voodoo Bunny got an offering of the first press of my fresh pomegranate juice. He didn't drink much, and didn't seem to mind when I finished it off for him.

After I filled one shelf in my freezer with jars, I realized I wouldn't have room to deal with all the juice this way, so now I am using Ziploc 1 qt freezer bags with 2 cups of juice in each one.

POSTSCRIPT
With the latest batch, I kept the squeezings separate from the main press. I think there is a little more sediment, but more clear juice came out than I had thought would. So I'll definitely squeeze, but maybe into a different container until I decant them all.
Posted by Carolyn at 7:24 AM