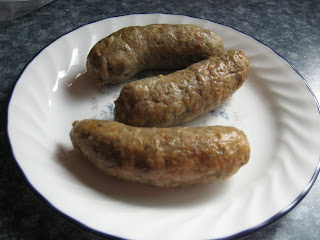 I've been experimenting with sausages.

Yeah, I know I can make the patties and then cook them or freeze them for later, but what's the whole fun of sausages if they aren't in those little casings?

I didn't want to invest in a nice new sausage stuffer, so I've been keeping an eye out in the thrift stores for something that would work. I already knew that my KitchenAid meat grinder, though it grinds meat and more, is a mess to try to run already ground meat through it for stuffing sausages. My goal is to make sausage that is lower salt, lower grease, no strange ingredients, and usually chicken.

I finally ran across this at the Goodwill in Colorado. 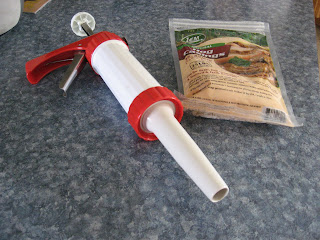 It had a smaller funnel, but I found a larger one later that fit. It works just like a caulking gun. I do have to refill it several times for a batch of about 3 pounds sausage, but it isn't a big trouble. I picked up a package of natural hog casings at the Bass Pro Shop. You soak them first to get the salt out. They then resemble tough snotty strings that work hard to tie themselves in knots.
It was pretty easy; I greased the nozzle, pushed the casing on it, tied the end off and started caulking, er, stuffing. every few inches, I gave things a couple twists to make the links, and then tied it off again at the end.
I'm still working on my recipe. This one turned out pretty good, mostly using fennel, poultry seasoning, black pepper, kosher salt, and a little garlic. I also added a little red pepper flakes. I broiled these; I think they would be prettier and maybe tastier on the outside if I fried them, but this was SO easy! An instant read thermometer told me when they were done, at about 180.
What should I try for the next batch?