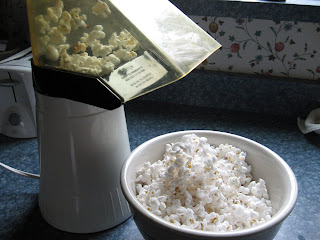 My mother LOVED popcorn. If it were a horserace, I’m not sure if cookies or popcorn would have won, but in any case, popcorn held an exalted position in our snack cupboard.

Back in those days, when I was a kid, there was no such thing as microwave popcorn. There were no such things as microwaves, at least for the masses. She would just shake up a big bowl of popcorn in a cast iron skillet. Those were the days of the miracle grease, otherwise known as Crisco. We kids didn’t know anything about vegetable oil. If the grease needed to be liquid, we melted Crisco. Put the 9 inch cast iron on the coil, turn the heat on medium-high, toss a hunk of Crisco in and when it melted, drop a half dozen sentinel grains in. When they began to pop, scatter corn, yellow corn always, until it almost covered the bottom in a nubbly layer. Slap on a glass lid and shake and slide like mad until the popping stopped. Pour it into a bowl before the popped grains could scorch on the hot skillet. At this point my mom would always drop a couple pats of butter on top of the quickly cooling corn, which never quite melted. I’m sure if she had thought about it ahead of time, she would have melted a little bit of butter to drizzle over. But popping corn always seemed like such a spontaneous activity.

“Hey! Let’s have popcorn!” while turning the electric burner on with one hand and pulling the skillet out with the other. The popped corn was ready before the commercial was even over.

Popcorn’s holiday persona was popcorn balls. Mom would cook up a batch of honeyed syrup, pour it over the popcorn, and with buttered hands mash it into warm sticky baseball-sized treats. Back in the days when people didn’t worry about such things, we gave out popcorn balls for Halloween treats. However, as tasty as they were, I always had the feeling that after I took a bite and looked down, I might see one of my teeth keeping company with the other white kernels.

That’s where Cracker Jack comes in. All the yummy caramel flavor, but crispy. And a prize in every box! Do you remember any of those prizes? My favorites were the magnifying glass and the little book of jokes. The boxes were sort of skimpy though, and when we discovered Laura Scudders Big Gigantic Tub of Caramel Corn, we dropped Cracker Jack.

In the meantime, I got my mom an electric popcorn popper for Christmas one year, which pretty well eliminated the burnt kernels. And in an unusual turnabout, a machine was put into the hands of the people before its main purpose was created: microwave popcorn. Always perfectly oily and salty.
The air popper came along, but we didn’t prefer it, since corn cooked in grease is tastier and more tender. Plus, the salt sticks better. I did discover a great use for air popped corn though—making my own caramel corn. I had discovered the way to have crispy instead of sticky caramel corn is to bake it for an hour with the syrup coating it.

I had pretty well let popcorn out of my cupboard and my life. But when my daughter, Melinda started raving about loving it, I decided to give popcorn another chance. And it’s not bad! Sure, I’d rather have cookies, but a deadline is looming. And the name of that deadline is “New Year’s Resolutions.” Since my resolution is going to seriously curb my pleasure eating, I’m going to get creative on the popcorn. I got an air popper so the corn is virgin to begin with. This morning I drizzled olive oil, popcorn salt, and butter buds on a big bowl of the white fluffiness. While it lacked a certain something, at least it handled my snacking urge. For now.
Posted by Carolyn at 11:50 AM