You know those annoying too-easy-to-be-true, carefully designed to hit maximum brain craving recipes that pop up in Facebook? The ones that encourage you to "make sure you post this to your wall so that you can reference it later!!!!!!!!!!", as if there is one moron left in this world that hasn't figured out that doing so is actually sharing it with like all your gazillion friends who of course want to see the recipe as well as the million memes about *your* pet issue?

It finally happened. I finally had to put this idiocy to the test. Could I totally be missing out on some of the best kept secrets known to (wo)man of how to make succulent cravables in *my* kitchen? Could it be that instead of a shelf full of carefully vetted cookbooks, a binder full of my mother's recipes, and a handful of tried and proven cooking blogs, what I really needed was merely some pretty pictures and emoticons? 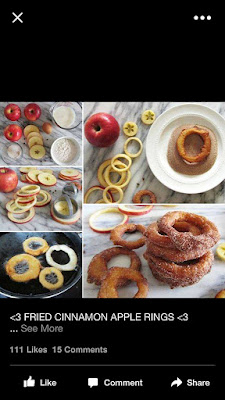 Please go ahead and convince me that the product of this recipe isn't meant to evoke the promise of friend onion rings. But then you realize it's APPLES, and CINNAMON and SUGAR.....and well, I was sold.

Not so much when I saw the recipe.  That was an awful lot of of ingredients...... 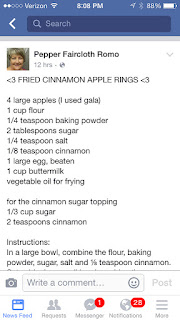 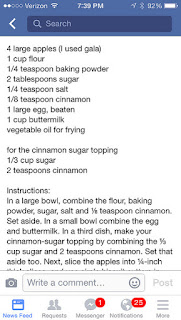 ...And a lot of instructions.  That included graduating sizes of biscuit cutters to cut perfect little apple rings.

Being not-a-food-blogger I don't *own* biscuit cutters and decided that cutting out the core in each apple slice and *not* wasting 75% of my apples just preserving a thin ring was the way to go.

After making up the batter I belatedly realized it was just a glorified pancake batter, not some sort of fry coating. Ah well. I used plenty of oil in a deep cast iron skillet determined to get that fried coating look of the original picture....and ended up with this.... 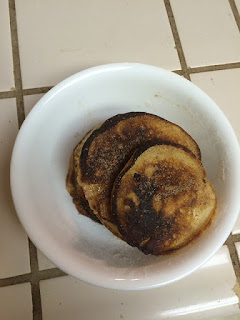 Fried pancake covered apple rings. That were tossed in a cinnamon sugar mixture.

I'll leave it up to you to make that "as advertised" with "reality" comparison side by side image.

Not impressed. Nothing special. Certainly not worth the effort. Lesson learned. For the next project...it needed to be simpler. Trendier. And for goodness sakes not include a list of ingredients and directions that took several screen shots to capture. Because obviously a real facebook recipe should be both cravable AND simple to make for someone with the attention span of......squirrel!

This recipe was perfect. I found myself on a Saturday morning with a cinnamon roll craving and....a can of biscuits. A couple days prior I had scrolled through a facebook recipe that explained itself in pictures and seemed simple enough while delivering some sort of monkey bread-cinnamon roll experience  that promised to be heaven on earth. It skipped most of the pit falls of the previous recipe, making it clear that anyone with the ability to purchase ingredients and hold it together for 5 or 10 min could in fact make something so unforgettably delicious it would be a Saturday morning staple in my household for all time. As a bonus, it was simple enough I remembered both it AND how to make it DAYS after seeing it.

Getting into the spirit of things, I decided to try my own hand at a little food-blog-picture-taking. 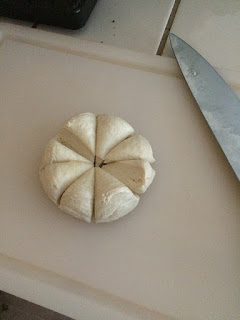 Cut biscuits into pieces. Ignore the dirt on the counters. 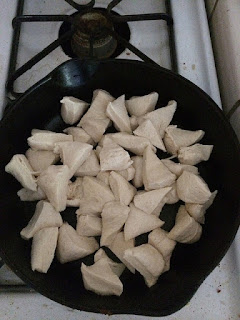 Throw into oven safe skillet. Admire how well the black cast iron errr color coordinates with stuff like the black burners. Just like a real food blogger.  Promise yourself to wipe down the oven top....later. 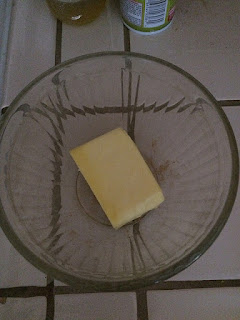 Heat up an approximate amount of butter. The "recipe" was rather vague on this but the pictures were very helpful and showed 2 sticks. But also a far more vast quantity of biscuits then I possessed. So I compromised on part of a stick. Which was then melted boiled in the microwave until the inside of said microwave was thoroughly buttered. As one does occasionally. 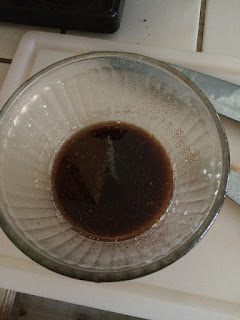 I dumped in the rest of my cinnamon and sugar mixture I had sitting in the cupboard and declared it good enough and poured it over the top of the little doughy tidbits.

Now I was a bit concerned since the recipe had shown biscuit chunks positively floating in a primordial soup of butter, cinnamon and sugar while some black color coordinated implement enticed them to swim underneath the surface.

Mine were merely tossed and dripping like little sun tanners on the beach. But, I swallowed hard and decided that a butter/sugar crack mixture that came half way up the side of the skillet was almost as good. 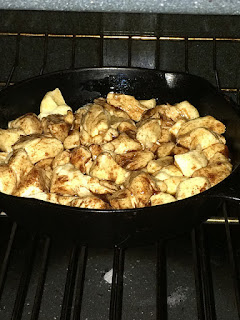 I placed in the oven, once again admiring how well my kitchen color coordinated! 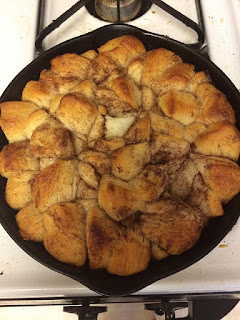 Tada!!!!!!  Now for the critical part - flipping the monstrosity over. It was made very clear in the recipe, having made it in a bundt pan, that flipping it was critical to quality control. 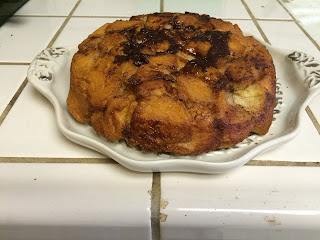 Voila!  I scraped the rest of the cinnamon sugar tasties out of the bottom of the skillet and dribbled on top. This was looking promising!!!!!

Verdict? ummm....well. It was really buttery. Too buttery to be cinnamon roll. Sorta....meh. So much promise...but on delivery fell short. The biscuit dough was just a carrier which is fine, except there was too much of it not to help deliver with taste. The amount of butter was overwhelming and I was suddenly glad I hadn't sacrificed the entirety of my butter inventory to replicate the primordial soup. Maybe a garlic bread version would have been better. Maybe with copious amounts (more) of cinnamon and sugar it would have been outstanding (what isn't improved with more cinnamon and sugar?). But maybe...next time I'll just whip up my mother's biscuit no rise cinnamon rolls and have cinnamon rolls. Or buy the can of cinnamon rolls that is sold right next to the biscuits.

Project 3: The one that really did work

I found this not on facebook, but on a google search, armed with a gallon sized bag of raw almonds and the faint recollection that someone once told me almond milk was easy to make. And they were right.

It's easy, delicious, explains itself in pictures, and doesn't require exact measurements.

Make sure you post this on your timeline so you can easily reference it later!!!!!!! ;) 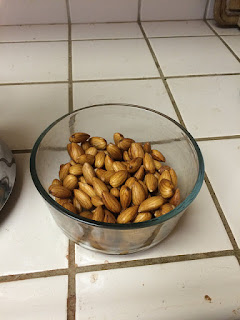 Soak raw almonds in water, enough to cover the almonds, for 1-2 days. Drain. (remind yourself to wipe down your counters...) 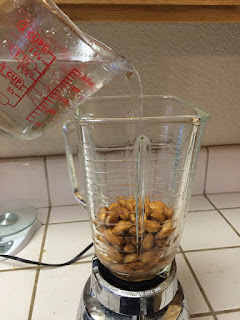 Put in blender with twice as much fresh water. The almonds plump during soaking and I use the dry volume of almonds to determine how much water to add. Shown is 1c. almonds (pre soaking) and adding 2 c. water. 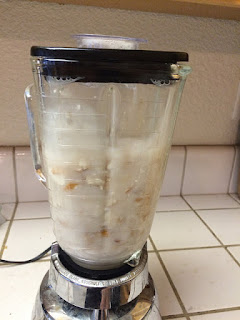 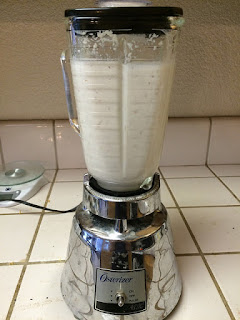 And then blend some more. 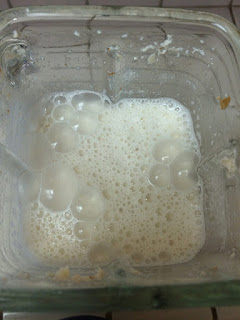 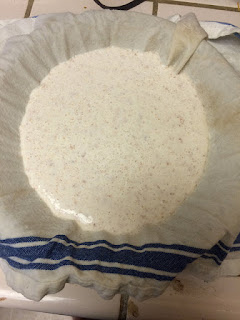 Lay a cheesecloth across a bowl. Or if you are me and don't own cheese cloth, use a damp (*cleanish....cleaner then my counters I swear!) kitchen towel. 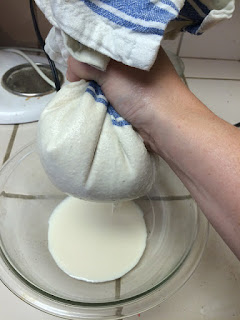 Squeeze the beejeezus out of it. 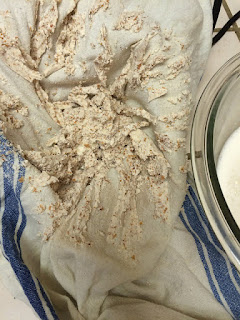 Save or discard the almond fines (can be stored in fridge and used within 2 days, or can be spread and dried on a cookie sheet and used in flour type applications). 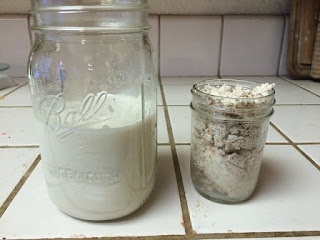 Refrigerate the almond milk and use within 2 days.

And this recipe is as good as it looks folks, I pinky swear promise.

***Yes the towel was clean. What do you take me for? An uncivilized heathen who thinks black is the new kitchen coordinating color? ;)