The Best Soup I Ever Made

(And Maybe the Best Soup I Ever Ate) 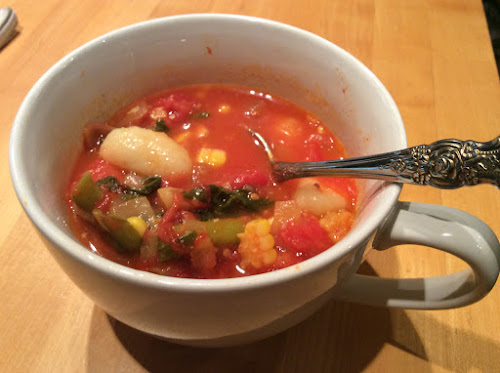 I like tomatoes. And I like vegetable soup. I've made it a number of times. Once in awhile, I choose it a the soup and salad bar, though I'm sometimes doubtful whether I'll like it or not. It often seems a little greasy, or overcooked. Last Saturday I ended up with a bounty of ripe, fresh vegetables and greens from the farmers market and knew I couldn't eat them before they spoiled using my usual vegetable cooking methods, so I decided to make them into soup.

I had three sacks of dead-ripe tomatoes that I used for the base. Even though it was more work, I went ahead and skinned them by parboiling and slipping the skins. They were very small, so it was a LOT of extra work! I cooked down the tomatoes for about a half hour or so.

The order of events for adding the veggies was pretty important, since I wanted them all to have some texture still at the end of the cooking. So while the soup was making, I would periodically toss in the next sliced or chopped vegetable. While the tomatoes were simmering, I set some diced shallots to sautéing in a bit of olive oil.

Add a chopped bell pepper to the sautéing onions.

Cut up the green and yellow beans and dump in.

Slice off corn from the cob and add.

Mince a couple garlic cloves and add to the sauté pan for the last couple minutes.

Set some gnocchi to boil in a separate pot.

Dump in contents of the sautéed pan.

Start seasoning the soup with red wine vinegar and "Better than Bouillion" chicken soup base mix (which I like to use instead of salt).

Dip out the cooked gnocchi and put in the soup.

Stir in chopped fresh basil and then turn off the burner.

I couldn't believe how sweet, rich, savory and flavorful it was! A nice addition would be a squirt if Sriarcha rooster sauce if you like the heat. Otherwise, it's perfect as-is.

Posted with Blogsy
Posted by Carolyn at 8:44 AM