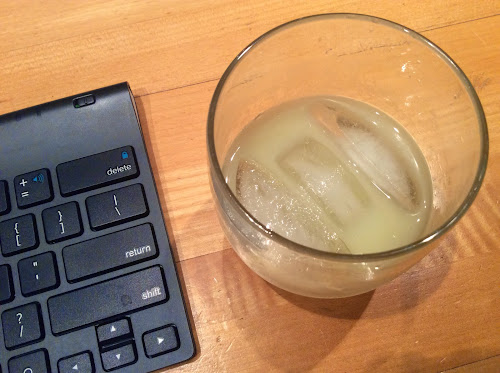 Over the past several years, we have explored new ginger ales and ginger beers as we came across them. So far, the best has been Ginger People ginger beer (according to my husband). The other night we tried a nice ginger beer from Trader Joe's that came in a large green swingtop bottle. It was also very good. But probably a little expensive. A very enjoyable project I worked on some years back was brewing my own ginger ale with a pinch of yeast and a liter soda bottle. One limiting factor was that when it was ready, you had to chill it and keep it chilled, since the yeast would continue to merrily divide, spewing out co2 until the bottle exploded or was drunk. The other problem my son kept complaining about was, "It isn't hot enough!" I tried adding more ginger pulp, but could never satisfy his craving for the ginger furnace he knew was possible.

I have since tried the other method of making ginger ale, creating a syrup and adding that to carbonated water. It wasn't bad, but it was a tedious process of peeling, slicing, simmering, straining, sugaring, etc. so I gave it up. The thing I WASN'T going to do was scrape my knuckles raw with a micro shredder and squeezing little bags of ginger pulp to just get the straight juice. And then, a light bulb went on. My Braun juicer!

I had picked up this big round juicer at the thrift store for just in case I ever wanted to make carrot juice or a little glass of apple juice! This is a serious machine, with heft, and a spinning shredder plate that flings the pulp against a whirling centrifugal strainer. Perfect!

I picked up a handful of plump ginger root pieces at Safeway, and got right to it when I got home. I peeled them and cut them into chunks. It was great fun dropping them into the hopper (immediately setting the pusher in place to keep them from flying back out again) and gently pushing them onto the grater. It was almost as much fun to hear the "REEEeeeeeerrrr" sound that made as it was to watch the yellow trickles of ginger juice run out into the cup. I ended up with a half cup of juice. When I opened the juicer, the strained pulp was dry as cardboard. I may or may not try to rinse some more flavor out of the remaining pulp next time.

I gently simmered it for about a minute with 3/4 cup sugar, 2 Tablespoons honey, juice of a half of a lemon, and a half teaspoon of lemon zest. It is thick, and opaque yellow. I put about a tablespoon into a half cup of carbonated water with a couple ice cubes.

It is amazingly hot and spicy, flavorful and juicy. What's great is that, for calorie watchers, you won't be glugging mouthfuls of sugary soda, you'll be sipping a small glass slowly. I'm still adjusting the ratios of sweetener to ginger juice, and deciding whether I need the lemon zest or not.

But I think this one is a keeper.

Posted with Blogsy
Posted by Carolyn at 11:12 AM