Since I have been trying to reduce calories, especially empty, wheaty, sugary, addictive, therapeutic calories like the ones that come in cookies, I usually just try to avoid the bakery aisle. And truthfully, the impulse to pick up the goodies and put them in the cart has faded mostly. I'll think about the spongy goodness of a fresh maple bar, with that soft yeasty aroma and the quarter inch thick maple glaze that has crusted over slightly, that when you fill your mouth with it, it fills your olfactory cavities with mapleness, and then I set my jaw, look away and concentrate on the next aisle, which contains the distilled water.

So the other night, I was feeling a little cocky. Sure, I was a little hungry, which is when I'm weakest for those food influences, but it was only a quick little stroll up to the Walmart for some binder dividers and ice. Then I'd be back and could eat an apple or something.

But when I got to the Walmart entrance, what did I Spy With My Little Eye? Girl Scouts. I slipped into the store through the door furthest away from them, but I confess, I knew what would end up happening. You could almost say I planned for my failure when I chose the other door to exit the store.

I buy Girl Scout cookies about once every 4 or 5 years, which is when all the conditions are just right. Which they were the other night.

So I looked over the table of cookies. There were Trefoils, which I gather are sort of shortbread cookies. There were Samoas, which reminded me the old Hey Days we used to buy on Sunday afternoons at Jeans Market after Sunday School. They had some called Savannah Somethings, which I was tempted by, since they were dusted with lemon flavored powdered sugar. But I knew I would be disappointed in them because those kind of cookies are never lemony and tangy enough for me. There were some others I can't remember the name of, but they were like Nutter Butter sandwich cookies. I was really thinking about those, but I couldn't help thinking I could buy a big package and a half of Nutter Butters for what this little 8oz box cost. At the back of the card table of cookies were two lone boxes of "Dulce de Leche" cookies tucked away. I assumed they had some caramel going on there and was briefly tempted to see if she would sell one to me, as they were obviously held back for someone. But no. I chose the Thin Mints. 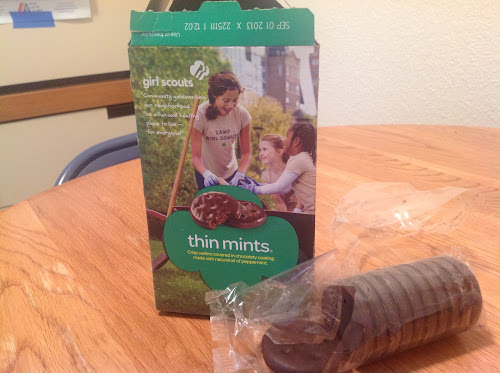 Why? You ask. Well, for one thing, I like them. The mint makes them feel slightly beneficial for digestion and good breath. And I read somewhere that people who sniff peppermint oil are better able to control their appetites afterwards. And mint is in sugarless gum. And mint also grows wild as an aromatic herb, useful for flavoring tea, which is good for you. 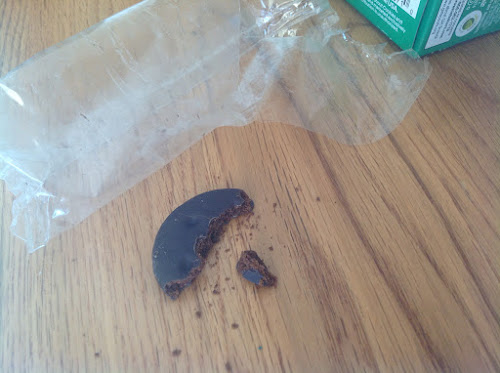 But I must confess also the motivation that reveals the base nature of the animalistic people we are; I would get them all myself since Cork does not like mint.

Posted with Blogsy
Posted by Carolyn at 1:02 PM