Before we left home, I had looked up the various microbreweries in the Eureka/Arcata area and I found one that was fairly new, Redwood Curtain Brewery. They did not bottle; it only was served in the taproom. It was during that Happy Hour time between Tea and Supper, so we found the place and went in. It was in a peculiar location, sort of a newer metal-building strip mall type place. Everything inside looked clean, tidy and attractive. But sort of industrial. Not the cozy pub that I'd prefer, but ahh well. 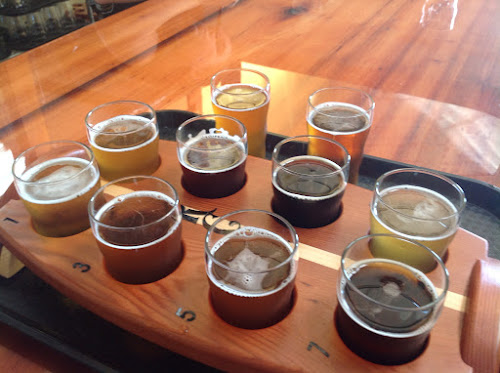 Definitely worth a side trip if you are in the area. And the tasting reminded me of a past realization of how each breweries wares are connected in their flavor palate. They may be wildly different styles, but there seems to be an underlying connection between them all. And the description of each underlined that. "...with our proprietary yeast strain."

The confusing thing about this tasting thought, was the numbering on the board. At one point I thought I was tasting a different one and trying to make sense out of it, and then felt foolish when I realized it was something completely different. Look at the board and see if you don't agree!

The most interesting one was the Flaming Sombrero, AKA Rauchbier. The smoked malt really infused this. I'd probably return if in the area; though the beer wasn't in the "best" category, it was certainly good enough, with enough choices. There were no logo pints, so we bought one of the cute "half growlers" full of Imperial Golden Ale. The logo is sort of strange, pretty, but just sort of, well, not right, somehow. Maybe too symmetrical and hard to figure out on the first glance. One fat double-headed tree with a hole cut in it? Two trees lined up? Any other ideas? And while I'm at it, "Curtain?" Just doesn't seem like the sort of word that goes with "beer" or "brewery" or "taproom." It has connotations of something closed off, like a kitchen window, or a shower curtain. 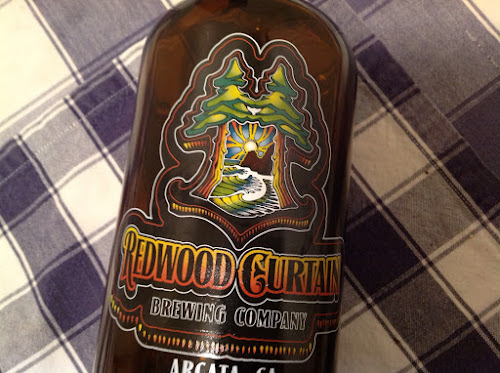 By now, being ready for a meal again, we checked into the motel and walked up the street to Lost Coast Brewery. It had been several years since I had been there, and had been tremendously impressed with their many-glassed sampler. I was newer to the game though, and was curious to see how they stacked up after seeing all the world class beers I'd had since.

Viewing the menu, I realized that I already was familiar enough with the ones I liked, and I wasn't interested in trying some of the others again. So we tried another tack--food pairings. 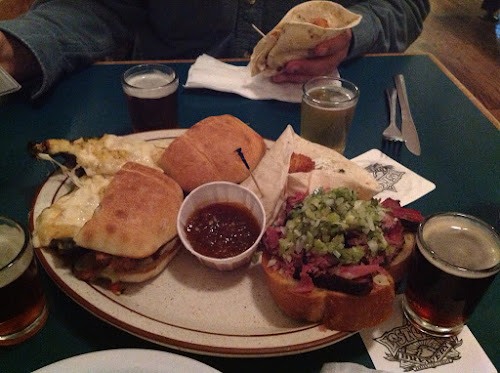 This was sort of like a tapas thing with four smaller items and four beers. It was actually quite a bit of food, even with the two of us sharing. And the small samples paired with them were the right way to go. The food was delicious and matched the samples well. I think we were both impressed with the red pepper jelly. It was something more tasty than either of us would have thought. I'd never had that, but would now be willing to try a jar sometime.

In hindsight, we zipped through more tastings in a day than was fair for judging each one well. But you work with the time given you!

Posted with Blogsy
Posted by Carolyn at 12:56 PM