What's a nice way to celebrate an early November anniversary? Hard to think of a more enjoyable outing than a drive over to the coast, through dark green conifers splashed with the occasional fire of deciduous trees turning fluorescent yellow, purplish red and neon orange on a windy mountain road. And when the destination includes a few microbreweries yet unvisited, well that's even better.

We headed west on Hwy 299 towards Eureka/Arcata on the most beautiful fall day. Since this is mostly (supposed to be) a food column, the main subject will be the eating and drinking, with occasional nods to the scenery, etc.

Our first stop was at the Mad River Brewery in Blue Lake. I'm not sure we would have found it without the GPS; either that, or Nuvi just sent us winding around the loopty loops of the residential and older commercial sections for fun. Mad River products are only available in limited varieties and locations in my area, so I was interested in seeing what all they made.

The taproom was small and well-appointed, with a nice homey feel. I knew they had limited food options, namely snacks, but I didn't realize the snacks were like what you'd get at a convenience store; chips, nuts, candy, etc. We hadn't eaten yet and didn't want to kill our lunch appetite on that kind of stuff, but not enjoying drinks on an empty stomach, decided to order a limited sampler and share it. 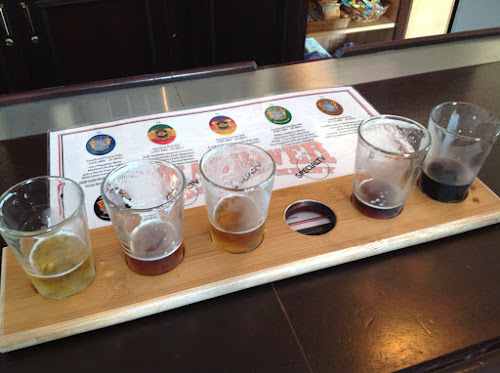 We skipped the Double IPA because we already knew what it tasted like, very enjoyable, really, a killer ale when you feel up to the robust and rich IPA flavor. They were all quite nice. There were so many samples we tasted on this trip that I am not going to tediously describe each one, but focus mainly on the noteworthy ones. My husband was pleasantly surprised by the Jamaican Red, since he usually does not enjoy the reds. I agreed; it was very good. The biggest surprise was the porter. It was rich and complex, toasty and just right for snuggling up to on a cool fall evening. We left with our pint logo glass to add to the collection. Now that we were properly primed for lunch, we headed for our next stop, Six Rivers Brewery in Arcata.

I had never even heard of Six Rivers Brewery before I started investigating via the Internet for likely pubs. I found out that they do bottle their beer, but the market is pretty well limited to local and the Bay Area. It was set up on a knoll, giving a nice view out across the west to the edge of the coastline. It was painted an unfortunate shade of baby blue, which made me think of all those sky blue Chevy pickup trucks sold in the 70's and the shower rooms of municipal swimming pools. The inside was attractive, with lots of wood, familiar and obscure beer signs, centerpiece bar and full light from the picture windows.

It's too bad that when I think of Six Rivers Brewery, the things that come immediately to mind are, in order:

The flies. Even if fly control had been a complimentary fly swatted upon being seated, it would have been preferable to having them crawling on the glass beside my head, crawling on the floor in a square of sunlight, and flying around the table waiting for my party trick of clapping them to death with my hands.

The service. It was sort of spotty, but the worst came when some of the sample glasses started to empty. The server began clearing them out of the wooden rack in front of me. I'd never had the waiter try to remove sample glasses when I was only halfway through the flight! But the worst was that when I asked her to just leave them until I was finished with them, she insisted on taking them, and continued coming back for more each time one was empty. She also attempted to remove my husband's pint while there was still a sip left until he stopped her.

The food. Ok, it was my fault for agreeing to a plate of deep fried various appetizers, but I was in a weak moment. But even then, it could have been better. Some were good, but some were not. Such as the onion rings that were overcooked and also only had a thin paper onion ring inside the batter shell.

I did not realize when I ordered the whole flight that not only were there 10 of them, but they were about 5 oz each! So I needed my helper here. 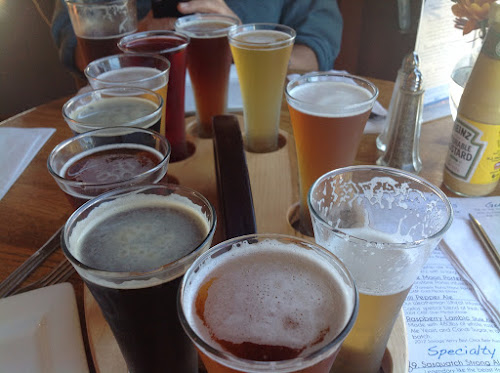 We worked our way through the samples, and also through the sample appetizer platter. The IPA was good, tasted to type, well-balanced, probably the best of the lot. I was interested in the raspberry lambic, since I was curious for the taste of that style, but didn't want to buy a bottle. It was very fruity, tangy, a nice sour taste. The Peach Bavarian Wheat surprised me. I'm not normally a fan of fruit beers, but this one had a great natural peach taste, delicate and not overpowered with the mild wheat beer background. Couldn't finish the pumpkin.

So, it was very interesting and educational, and the pint logo glass is very pretty, but I wouldn't search a bottle out in the store to purchase.

Stay tuned for the next two samplers in our beer tour!