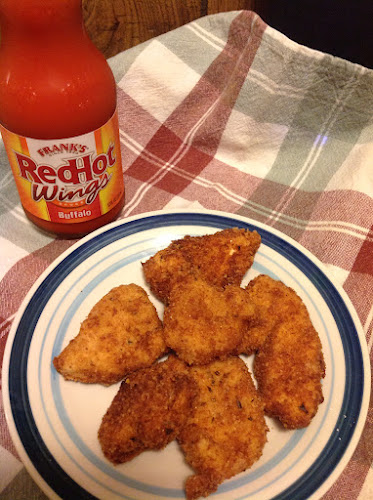 I've never been a deep fry type of person. Not that I don't love fried things, No Siree! French fries from the oven? Yeah yeah, they're all right. But fresh from the fry basket at a fast food restaurant? Yum! Microwaved corn dogs? Yawn; edible, anyway. But from the little window of the food vendor at the county fair? Just gimme the yellow mustard! And the crunchy crispiness of the fish in a basket of fish and chips can't be beat.

But it's a pain at home. The oil. The smoke. Regulating the temperature of the oil. You're afraid to get it too hot, so you err on keeping it too cold, so it takes too long and the food isn't crispy enough. I used to have a Fry Baby, and it worked pretty well the time or two I used it. But I just couldn't get excited about it for some reason.

And then Melinda showed up with a new little Cuisinart deep fryer and asked me to borrow it for a little while. I'm used to that sort of request. I think I am her test kitchen. I use a small household appliance, try out some recipes, learn some tips and then turn it back over to her so she can merrily use it.

It was so cute, that in spite of my "been there, done that" attitude on deep fry, I was game. What I like is that it has a lid with a carbon filter over the vent, so it minimizes the fry odors that escape. It also holds in any popping of the oil. It has a very nice temperature control set up and "heating" and "ready" lights. It is also smallish, so it doesn't use much oil.

I had a time of it when I went to plug it in. First I had to read lots of dire warnings to NOT use an EXTENSION cord! The cord is SHORT on PURPOSE! I know about the need for short cords. Years ago, my favorite TV show was "Rescue 911," hosted by William Shatner. In one of the episodes, a grandma was frying up taco shells in an electric wok for her grandkids. The wok was on a card table set a few feet away from the plug-in, leaving a kid-sized gap bridged by an electrical cord. Of course, you know what happened. One of the boys ran through that space, pulling the wok of boiling grease on to himself. Of course it had a happy ending because Granny called 911 and they told her to douse the tot in cold water until the paramedics arrived.

I seemed to be having some trouble plugging this appliance cord into the fryer though. It would only go in about a quarter of an inch and then it stopped. I pushed. I turned the plug the other way. Finally I got in close and inspected it. Amazing! It didn't "plug" into the fryer; it was held in place with a magnet! So any little tug on the cord would not move the fryer. It would pop off. Wonderful! You wonder how many people were burned before they came up with this.

I decided to make chicken nuggets for my first project. I used the method from the booklet that came with it. I cut the nuggets from boneless, skinless chicken thighs, dredged them in flour, shook off the excess, dipped them in egg wash (an egg whisked with a little water. I can't bear to use my Godfrey Family Farms Cage Free eggs for that, so I use cheap Winco eggs) and shook off the excess, and then dropped the nuggets in a bowl of seasoned Italian bread crumbs. I left the nuggets on a plate in the 'fridge while I got everything else ready. That helps the crumbs stay on during the cooking.

For cooking them, I did not use the basket. More nuggets at a time fit without using it. Instead, I used one of my favorite tools, a skimmer often used with Asian cooking. It has a bamboo handle and looks like a wire dream catcher at the end. They only took a couple minutes, and Oh! how delicious! Crispy and hot, juicy and tender. And not that greasy. My next project will be some sort of seafood. But I think for chicken nuggets alone, this device is worth the cupboard space!

Posted with Blogsy
Posted by Carolyn at 10:14 AM