What is the True Meaning of Peeps? 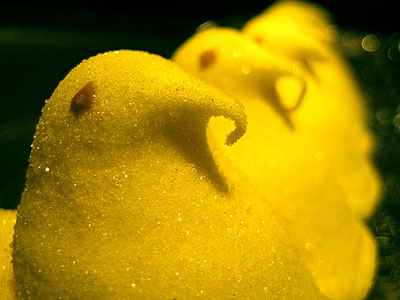 All around the world we human beings anticipate the approach of our traditional holidays. Families, friends and social and religious groups meet to celebrate the rituals and feasts and curious habits of each holiday. If you live in America, thanks to the retailers and advertisers, you can’t NOT know the trademarks of each major holiday, which are conveniently spaced throughout the year to provide maximum shelf time for all the props and edibles.

Pondering the commercialization of our American and Christian holidays, I’ve wondered about two things: One, why haven’t the retailers managed to insert a few clever holidays in some of the ‘blank’ months, like September? Two, will they ever manage to completely ruin Thanksgiving with chocolate turkeys and Thanksgiving trees?

If I were to answer my own questions, I guess I’d say that for the first, the retailers rely on ‘bleed-over,’ that is, sticking with what works best, which is Christmas. Why invent a new holiday when you can just bring Christmas a little closer? And handily enough, this also answers the second question. Leftover packages of turkey paper plates and pilgrim-themed centerpieces don’t bring in the bargain-hunters the day after the fact like day-old Christmas candy and decorations do!

One thing that fascinates me is the symbolism of certain foods that show up at all major holidays. There are shaped foods, which are cute, fun, and obvious as to their message, such as candy or cake hearts for the holiday of love, Valentine’s Day, cookies shaped like Shamrocks or four-leafed clovers for luck that abound on St. Patrick’s Day, and Candy Canes that are said to represent a shepherd’s crook for Christmas, bringing to mind the first visitors of the infant Jesus. And for the holiday upon us, Easter, nothing is more iconic than the chocolate Easter Bunny.

But I wanted to look just a little deeper at the symbolism of holiday food at this time of the year, and these are some of the things I have found out.

Easter Eggs. Love’em or hate’em, Easter Eggs are embedded in the holiday and will never be dislodged. Chocolate, marshmallow, decorated sugar, Whopper, jelly, hard-boiled or plastic with candy inside, there’s a kind for every taste. But why eggs?

Eggs are traditionally connected with rebirth, rejuvenation and immortality. This is why they are often associated with Easter. Eggs were colored, blessed, exchanged and eaten as part of the rites of spring long before Christian times. Ancient peoples thought of the sun's return from darkness as an annual miracle and regarded the egg as a natural wonder and a proof of the renewal of life. As Christianity spread, the egg was adopted as a symbol of Christ's Resurrection from the tomb. On a more practical level, in the early Christian calendar eggs were forbidden during Lent. This made them bountiful and exciting forty days later.

Breads. As bread is the staple in the diets of many cultures, it is also full of symbolism in religious ceremonies and holiday banquets. As Christ shared the bread with his disciples at the Last Supper before the crucifixion and resurrection, Christians repeat that ritual with a bit of unleavened bread as a remembrance.

In a pagan note, the word ‘Easter’ comes from the name for the Anglo-Saxon goddess of light and spring, Eostre, and special dishes were cooked in her honor so that the year would be endowed with fertility. Most important of these dishes was a small spiced bun. The Egyptians offered small round cakes to the goddess of the moon, each marked with a representation of the horns of an ox, which were her symbol. In ancient Greece, a similar small, sacred bread containing the finest sifted flour and honey, had the name bous meaning ‘ox’ and from which the word ‘bun’ is said to have originated. The Christianized form and the ritual of baking ‘hot cross buns’ became standard practice of the Easter celebration in English society. ‘One a penny, two a penny, hot cross buns.’

Meat. Probably the most symbolic main dish to grace the Easter or Passover table is lamb. According to the Encyclopedia of Religion, Mircea Eliade editor in chief [MacMillan:New York] 1987, volume 5 (p. 558):
‘Among Easter foods the most significant is the Easter lamb, which is in many places the main dish of the Easter Sunday meal. Corresponding to the Passover lamb and to Christ, the Lamb of God, this dish has become a central symbol of Easter. Also popular among European and Americans on Easter is ham, because the pig was considered a symbol of luck in pre-Christian Europe.’

I tend to think that ham is popular because it is easy to cook, everyone likes it, it is much cheaper than lamb, and all the stores carry it. Just try to find a leg of lamb at a Walmart SuperCenter!

I find the ritual and symbolic aspect of the Jewish Passover Seder most interesting. Some of the traditional foods are:
Matzoh (sort of a cracker): Three unleavened matzohs are placed within the folds of a napkin as a reminder of the haste with which the Israelites fled Egypt, leaving no time for dough to rise. Two are consumed during the service, and one (the Aftkomen), is spirited away and hidden during the ceremony to be later found as a prize.
Maror: bitter herbs, usually horseradish or romaine lettuce, used to symbolize the bitterness of slavery.
Charoses: a mixture of apples, nuts, wine, and cinnamon, as a reminder of the mortar used by the Jews in the construction of buildings as slaves.
Beitzah: a roasted egg, as a symbol of life and the perpetuation of existence. (Here’s that egg again!)
Karpas: a vegetable, preferably parsley or celery, representing hope and redemption; served with a bowl of salted water to represent the tears shed.
Zeroah: traditionally a piece of roasted lamb shankbone, symbolizing the paschal sacrificial offering
Wine: four glasses of wine are consumed during the service to represent the four-fold promise of redemption, with a special glass left for Elijah the prophet.
(http://homecooking.about.com/od/foodhistory/a/passoverfoods.htm)

I know that people today have their traditional family favorites they bring to the holiday table. And if you showed up without it, your relatives would scream, ‘What! You didn’t bring the Cranberry Walnut Jello Salad?’ But what would be fun and thought-provoking is if we could assign each part of these newer traditional foods special symbolism for the group that is partaking.

Now wouldn’t that be more meaningful than another Easter basket full of Peeps and jelly beans nestled on pink plastic Easter grass?

(BTW, what is the true meaning of Peeps?)
Posted by Carolyn at 6:00 AM