I knew there was a lot of drip drip going on outside my tent. But I was lying there enjoying how much warmer I was than I had been the night before. And the fly was huge enough draped over the tent to ensure that I stayed dry. The heavy mists and fogs had rolled in the previous night and damped everything. I had worn my raincoat playing cards and drinking decaff tea the night before to keep dry. In a smart preparatory move, I had brought a big black garbage bag along, and had pulled it over my pack. When I peeked out, I could tell that most of the moisture had fallen at once last night, but the fog had settled in. 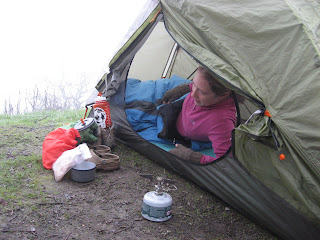 Melinda was also stirring. Self-sacrificing, I offered to fetch the stove and stuff so we could have breakfast in bed. (OK, so I had to get up anyway.) We had coffee and oatmeal while cozied up in our bags at the doors of our tents. 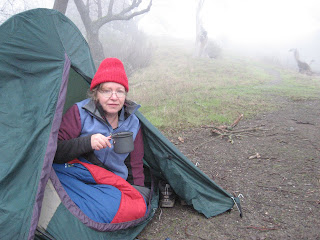 While my 2cnd hand tent is big and sprawling, and droopy-looking with the fly on it, Melinda’s clever little tent is cute and compact. It is truly a thing to envy. 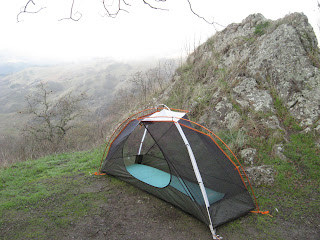 We didn’t hear much from the male-bonding group with their illegal bonfire, or the from the two women and their illegal dog who had been hanging out at our camp when we arrived. (They were enjoying the picnic table when we arrived, but we knew their camp must be one of the other ones because they had no gear with them.) But now I had to face my familiar discombobulation: that of filtering my water from the tap without having the extra Nalgene for the “dirty water.” The night before I had used my small dry-bag to fill with water to pump from. This morning I used Melinda’s little plastic “sink” that was also the bag for her cooking pot. This time I used a stylus in my mind’s eye, “Bring extra Nalgene next time!”

As we began tidying up our things, we both sighed at the prospect of a gray day. The fog was pretty, with the pale sun shining through dim areas overhead, but gray is gray, and we were remembering the yellow glow of the previous afternoon sun that had kept us in good brain health. Then, even as I was watching, it was as if a giant gauze curtain was being swept back. A very light breeze was moving the fog out. 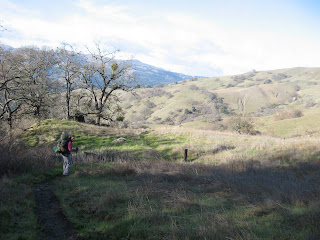 In less than a minute, our invisible surroundings gave way to a view, a sunny view! I had never seen fog clear that fast. But that is probably because I am used to Tule fog that comes in and doesn’t budge for 2 weeks.

We had another creek-crossing to do. This was a place that would have been lovely for a picnic. 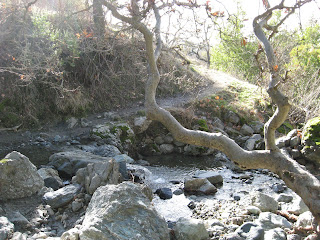 When I cross a creek, I always think, Oh Dear, what if I fell in? And then I slap that thought with another one, I CAN’T fall in; it would be a disaster! I try never to forget that I’ve got a big weight on my back that can unbalance me in a second if I am not aware of each step I take.

As we climbed up and down over the grassy pastures and scrub, I saw a lake off in the distance. I still can’t tell what it was but it was pretty. 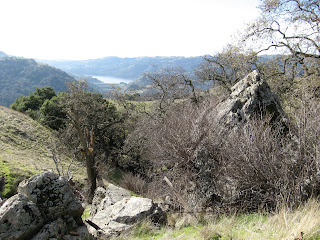 We’d been following the map and the trail markers with not much difficulty up until now. But we came to a fork in the road that was very ambiguous. We stopped. Looked up the one. Looked down the other. To Melinda’s annoyance I was moved to poetry.
“Two roads diverged in a yellow wood, and, sorry I could not travel both and be one traveler, long I stood, and looked down the one as long as I could to where it bent in the undergrowth.”
“Ha! Enough of that! This is not on the map. Which one should we take?” 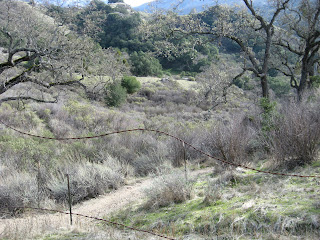 The upper trail was brushy and leafy, and we hiked for about 20 minutes before we were sure we’d picked the correct one. And then, with relief, we came upon the next signpost. 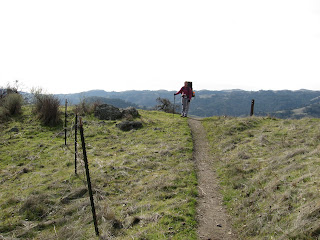 As we walked along, we began to meet groups of day-hikers. Civilization was near. Melinda’s favorite topic began to come up more often.

“I sure hope Los Vaqueros is open! It had better be! I’ve been looking forward to going by there for our post-trip meal ever since we started!” Indeed, I was also beginning to fantasize about the stuffed shrimp appetizers at Los Vaqueros. The reward ahead was driving our aching and tired muscles onward.

We met a couple of guys at one of the last gates. They looked admiringly at our backpacks.

“You guys stayed out overnight?”

We nodded. “Two nights. We started at Del Valle.”

“Hey! You look great after that hike!”

We grinned foolishly, flattered. And missed our little turn on the main trail, finding ourselves on the Indian Joe Nature hike with interpretive signs on various formations and vegetation. Just a little detour to pay for getting our heads turned. 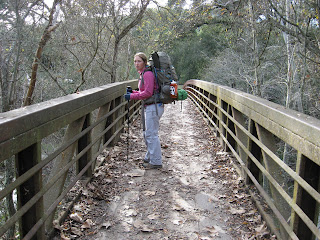 Finally, the end of the trail. 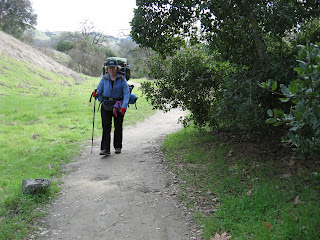 It was a Sunday and lots of families were enjoying the sunshine, hiking and picnicking. The parking lot where Melinda’s truck was waiting was a very different sight from the deserted, cold afternoon when we had left it. To complete the experience, we had to sign the check-out sheet. 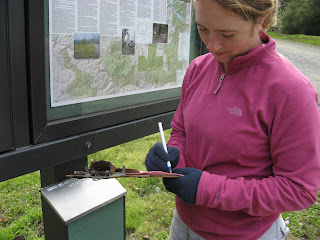 Yes, I was tired and ready to be done, but there was a part of me that was not worn out yet. I knew that if we had to hike the last leg of the trail, I could do it. Even though the previous two days had been the hardest physical event I had ever put my body through, I still had some left over the next day. I was sort of amazed at how much I was really capable of.

We still had to drive back and pick up my truck. An hour into our hike, I had remembered that I had left the camper shell windows open and had forgotten to close them before we struck out. I had two brief thoughts; someone would slit the screen, climb in and steal my stuff; and it would rain, wind blowing the moisture into the back and wet all my stuff. I had then put it out of my head. We couldn’t go back, and I did not want to worry about it for 2 days. Happily, I found that all was well with the camper. We zoomed off to Livermore for the best Mexican restaurant in California. 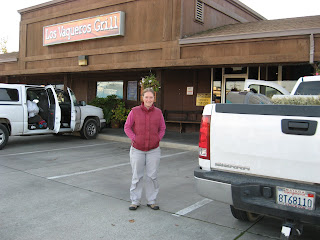 Even though I knew we could never eat it all, we HAD to order the most popular appetizer. Breaded jumbo white tiger shrimp, stuffed with cheese, wrapped in bacon, topped with a chipotle sauce, nestled by greens topped with guacamole. A good choice for 4 people, the two of us made short work of it. I asked for recommendations for exotic flavors and ordered the Thai Fish Taco. Melinda had some kind of burrito. Everything was as excellent as we had remembered!

We had to go back to our regular lives then, but already mentally planning the next backpacking adventure!
And now, I must mention the little backpacking diary Melinda gave me at the start of the trip. Have you ever turned two pages at once accidentally in a blank-page book? I did on this, several times. So I had to go back and fill them with SOMETHING! 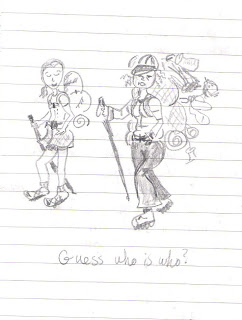