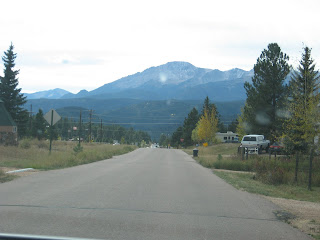 Of all the advice I got for my planned backpacking hike up Pike’s Peak, the one I heard most often was “travel light.” Oh, and also, "Take your time and enjoy it." With such simple advice, how could I not consider doing it?

I can’t remember exactly when the idea to climb the mountain first came up between my sister Nola and I. I think she brought it up several years ago, maybe the first time I went out to Colorado to visit and we rode the cog railway up to the summit of Pike’s Peak.

Nola: There’s a hiking trail that goes up Pike’s Peak. We should take backpacks and climb it.

Every year the topic resurfaced and seemed to sound less crazy, until I knew we were going to do it. Finally we put a date on the adventure. October 7-8, 2010. Nola made the arrangements with Barr Camp to spend the night in the cabin there halfway up the summit. The plan was to strike out in the early morning, have all day for hiking up, sleep in the cabin bunks and then head back down the mountain mid-morning. I had 2 months to prepare.

The funnest part of preparation is acquiring equipment. Each piece comes with its own fantasy of use. The Miox pen I borrowed made scenes in my mind of a pristine mountain brook, babbling its way over the rocks and into my Nalgene bottle, an endless supply of freshly sanitized water to quench my well-earned thirst. My new black silk underwear top, keeping me at a perfect temperature –not too hot, not too cold. My darling little butane backpacking stove, helping me whip up gourmet meals on the trail, the single reason why we weren’t doing the sensible thing of eating the spaghetti dinner at Barr Camp instead of carrying the extra weight of the stove, fuel and food. My backpack… ah yes. My 30 year old thrift store backpack. I took it in to REI (after all, it is REI brand!) to see if they saw anything obviously wrong with it before I started counting on it. The first thing I heard as I brought it in was the accusation, “What are you doing with that external frame backpack!!!” Obviously fashion has caught up to and passed me, and internal packs are all the rage now. After I defended it by saying that I liked it and found it comfortable, the clerk admitted that his wife used one just like it. It passed muster, so I began practicing packing it out.

Now the main worry needed to be dealt with. Could I cut the mustard? Would I poop out 3/5 of a mile up the trail while Nola bounded like a gazelle up the slope? She did have an advantage over me. She lives at 8,000 feet while I live at basically sea level. It would be bad, but not AS bad if we both ran out of steam partway up, but it would be a real blow to my self-esteem for me to be the limiting factor. I had already started running up and down the driveway to get fit, but what I needed was an incline. 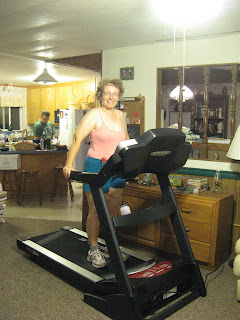 I picked out a treadmill that elevated and started working out like the hounds were at my heel.

I had followed my list meticulously when packing. Everything written down had gotten stuffed into one of my duffel bags. Except –the thing that I had forgotten to write down. My Leki collapsible hiking pole. Good Grief! Luckily I found a fantastic solution. Instead of having my family packing it up in a mailing tube and sending it to me, I bought a set of short ski poles at the Woodland Park Goodwill, and Nola and I both used one as a walking stick.

Finally, after several days of training hikes, the day came when we began loading the packs. I had 3 cute little dry stuff sacks for my clothes, food and personal items. I had a new sleeping bag that rolled up nice and small. I had a little black ditty bag for first aid, chap stick, map and sunscreen that dangled on a clip right behind my right upper arm. (That cursed little black kit, a little too far back to grab easily, that had a square of Velcro that kept snagging my silk undershirt, that was so cheap it began ripping out one of the sections before I was even halfway up, and the highest insult, it read “AARP” in big white letters across the flap.)

I couldn’t bear to leave any of my 3 Nalgene bottles behind, even though I was using a Camelbak water bladder tucking into my backpack. What if the stream that was supposed to be halfway up to Barr Camp was dried up? What if it was hotter that I expected and I drank up all my water? Hydrating well is supposed to ward off altitude sickness. What if I didn’t hydrate well enough? In spite of my daughter’s advice that I wouldn’t need that much, I filled my Camelbak, 2 of the 1-liter bottles and sadly left behind the 3rd one.

We weighed our packs. They said mine was 30 pounds. Yikes! 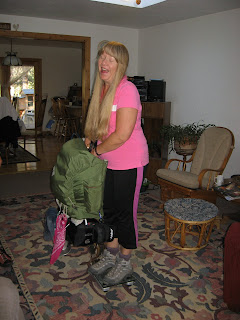 OK, so it was heavy. But I think her scale was off. Or maybe water is heavier than I optimistically wanted to think. On the way down to the trailhead at Manitou Springs, we did a side trip to Wal-Mart to pick up extra sunscreen and chap stick, and then I saw just what I needed. Crunch 'n Munch. From now on Crunch 'n Munch will go on my backpacking list. It is tasty and very lightweight. I had a hard time figuring out how to hook it on to my pack and finally just tied the silver Mylar bag to my waistband with my pink bandanna.

When our ride, Brian and Tim, dropped us off at the trailhead, I did some serious evaluation with a reality check and poured out half the water in my Nalgene bottles. NOW I was ready to hike! 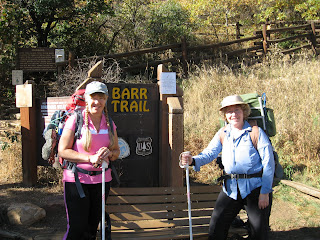 The very first part of the trail is the toughest; it climbs relentlessly up sets of stair-like sections, it’s all in the sun with no shade, and the view is rather plain. We had gotten a late enough start (10AM) that people were already coming back down the trail. They were usually running, and perhaps were some of those crazy people who had hiked up “The Incline” and then, to maintain the same level of physical discomfort, preferred to run instead of walking down. I felt like a loaded pickup truck laboring in first gear up a steep mountain road. I mentally reviewed the rules of the road, which state that uphill traffic has the right of way on one-lane roads, and I took it. Those we met did stand aside, either because they recognized our right of way, or because they looked at the two of us and didn’t want to be responsible for making us lose our momentum. 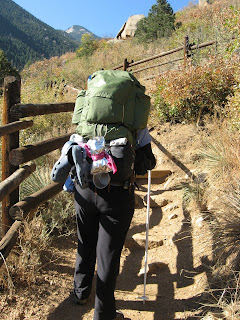 Since we had plenty of time, we took it slow and steady, stopping to enjoy the view and take pictures often. 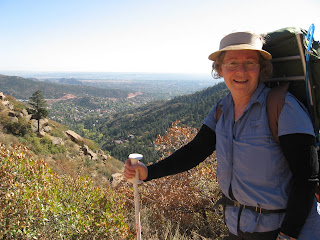 It was amazing how quickly we seemed to gain altitude.

It was a relief to reach the shade of the conifers. I needed to pull off my leggings and put on my shorts. I also unzipped the sleeves of my shirt. I was still wearing my long silk underwear. It might have looked hot, but wasn’t. Sweat evaporated, cooling me down through them, they kept the sun off my arms and legs, and they kept me from getting chilled higher up in the shade.

One of the crazy sights on Pikes Peak is “The Incline.” 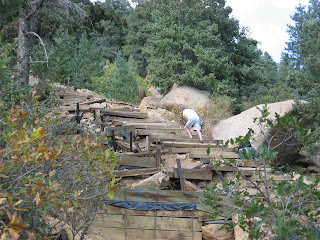 Apparently, years ago there used to be a funicular railroad that went partway up the side of the mountain for tourists to take the view. After that went away, the rails were removed and the route became off-limits. But the extreme hikers went after it anyway; effort was made to pile necessary additional timbers to fill in the bare spots, and it was opened up for hiking. The top of The Incline feeds onto a loop of Barr Trail several miles up.

In just about perfect timing for a lunch break, we reached “No Name Creek.” We stepped across it, took off our shoes and kicked back for an hour’s rest and food. The creek was not very deep, but I did find some clear water to put through the purifying process and fill my bottle.

It’s funny how squeamish I felt about drinking “wild water,” even treated with the Miox solution. When I was a kid, we had a get-away cabin by a creek. That first year, we drank the creek water straight from the bucket. We used to drink irrigation water occasionally from the nearby orange grove. But I guess after you read about giardia and all the other invisible germs that water can carry, you just get a little paranoid. But this water was what I had been planning on to drink, so I went through all the fun little operations with the Miox pen and started the germ-killing process on a liter of water.

The trail went steadily up. We weren’t meeting as many other hikers how. The mixed oak and conifer vegetation had given way to stands of aspens and pine trees. As we gained altitude, the aspens lost their brilliant yellow leaves, and we could see magnificent granite formations through the bare white trunks of the aspens. 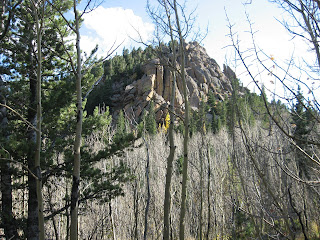 We’d been on the trail for about 6 hours and had reached the final half-mile of the hike. this part was supposed to be pretty tough, and it was sort of like walking upstream in a dry creek bed with football-sized rocks making like stairs. We really appreciated our sticks for this part! Finally, Barr Camp! 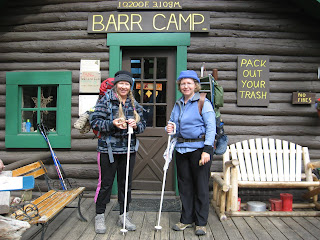