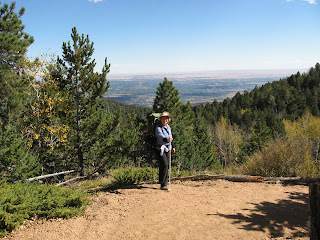 After our delicious breakfast of the special pancakes prepared by the staff of Barr Camp, we had a couple of hours free to look around the area before we needed to head back down the mountain.

We took off on a 1 mile side hike to a boulder outcropping that was supposed to give a terrific view. It was an easy, pretty hike. The weather had turned chilly over the night, spitting out pellets of snow, and we wore our cold-weather gear. The fork leading to the outcropping was clearly marked by a big arrow on the ground made of white quartz rocks.
There was quite a bit of the quartz. In areas, you could see that the rounded side of the mountain was all white quartz, thinly covered with a layer of dirt. The scattered white rocks and the mounds where dirt was washed away looked like half-melted snow on the ground.

At first it looked like our trail just disappeared into the pile of boulders. But once we started climbing on them, we could see each logical place to climb to next. 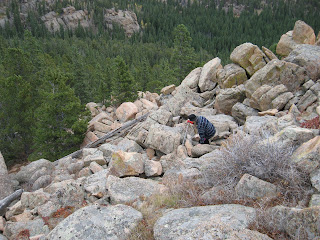 And when we reached the top, the view was glorious! I felt like I could see to the east clear to Kansas. 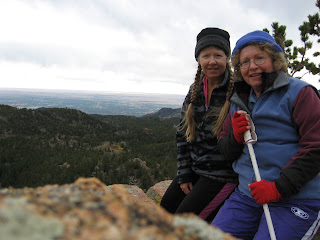 To the west, the mountain loomed. I think we were too close to see the actual peak from here, but what we could see was clearly above timberline and decorated with traces of snow. 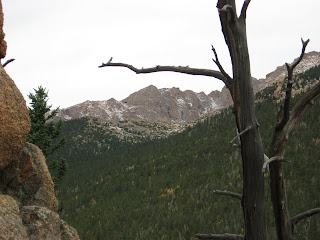 Coming to this spot was important to me. We had not climbed to the top of the Peak, but we did climb to the peak of something, and we got the pleasure of looking down and out at the beautiful expanse below.

At 11AM we were ready to hike back down the trail. I was very curious to see how much faster we could go down than we had come up. I was anxious to get going and ended up attaching a few too many things on carabineers to the back of my pack, and they quickly slid down to the bottom. With each step, swing, slap! swing, slap! My camp shoes and empty Nalgene bottles slapped me on the rear until I couldn’t stand it any more and tried to readjust things. My little black ditty bag I had hooked above my shoulder kept snagging the material of my silk underwear top with the Velcroed flap. I couldn’t find a handy place to put my camera and still be able to grab it when I needed it. But I got a lot of ideas for making my pack-out better for next time and for customizing my backpack with more pockets and loops!

We practically ran down the trail. I could feel my feet sliding down towards the toes of my shoes. I tried to keep my body flexing as I moved down the trail instead of lumbering stiffly. There were a couple of spots on the trail where it was possible to take a wrong turn and go off on an abandoned spur. We were near one of those places and were being careful to stay on track when we had the shock of coming across a dead tree blocking the trail! Our first thought was that we had strayed, and we walked back up a little ways to check that possibility out. But then we saw the freshly broken aspen and the raw hole in the earth where the rotten trunk had broken off below ground. The wind the previous night had blown it over. We had to climb over the tree. It was very exciting. 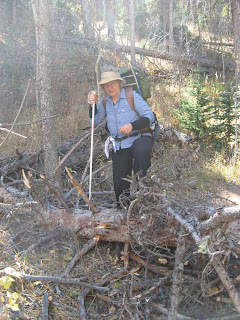 We stopped at No Name creek again to have a cup of coffee and a half hour rest. Climbing down is hard in a totally different way than climbing up. The last mile and a half was fairly brutal, and I would say that using my walking stick saved my knees from a lot of wear and tear. We reached the trail head at 3:11PM that afternoon, called for our ride and sat on the rock wall by the Cog Rail station while we waited. 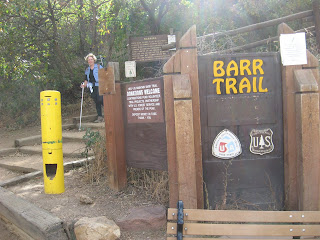 It felt like we’d been gone longer than we had. But I’m sure that was because we had done so much. Perhaps that is the secret to living a life that feels long and full. To put challenges and adventures in it, to do things unusual and interesting, to test yourself, to step out of ordinary life once in a while.
Posted by Carolyn at 8:15 AM