Guest blogger here! This is the oldest and most pretentious daughter of Carolyn, from over at Boots and Saddles.
Pork Roasts were a good deal at the supermarket so I decided it was high time to use some of that advice my mother had been throwing at me for 25 years. Now, I faintly remember something about pork butts being cut into 2 pieces and labeled the same for resale, HOWEVER (and this is where my mother became adamant) they are NOT the same, even if they are the SAME price. One of the pieces as a bone that looks small but gets larger and larger. You want the other half. The half that just has a tiny little bone in it.
She had gone into how to recognize the halves by shape - knowledge I could NOT bring forth as I stood forlornly at the meat department. Of course the pieces were placed in the trays as to disguise their bone content.
By much prodding and poking and glares from the meat manager, I managed to determine which of the pieces had the smallest bone and lugged my prize home.
Ugg it was big.
Decided to make pulled pork. Referenced my recipe book out that has never failed me - Better Homes and Gardens in the red plaid cover - and set to work. Soon I had piles and piles of pulled pork.
At work the next morning I announced my intention of making tamales. As I work with a predominantly mexican demographic, there was no end to the advice, the most important being:
"You can't screw it up" (apparently you can screw it up by not following the proper tamale "ritual" as I discovered after I made it and told everyone what I did)
The rest of the advice I received is in italics throughout.....
Apparently the stores only carry premade masa during a certain time period I seemed to have missed by hours.
Fortunately my co-workers came to my rescue ("masa is just masa flour and water! Sometimes lard is mixed in") and I found the masa flour.
I decided that since I had to make my own masa, I was buying sauce. I picked out the most authentic looking Mole sauce I could find, and a can of chipotle peppers in adobe sauce (my favorite). After all, I was told "Put whatever you want in them. Raisins, cheese and veggies!"
I pulled down my trusty cookbook (as aforementioned) and was horrified to see no mention of tamales! I then looked at my very authentic ingredients and realized that all directions were in spanish. Ooops.
Oh well.
Masa (corn) flour + water = masa dough. I was a bit skeptical but "voila!" like magic, just by adding water I did not create papermache paste, but rather a dough that looked, smelled and tasted like masa! Hurdle #1 crossed.
Crunchy cornhusks got soaked. 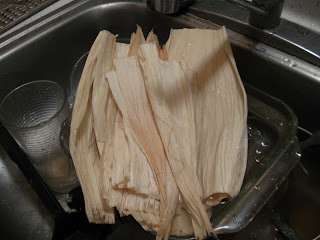 Pulled pork was mixed with enough mole to moisten and cover meat with sauce, then added 1/2 can of the peppers. It looked, smelled, and tasted like tamales. Hurdle #2 crossed. 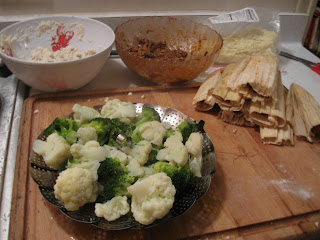 The cornhusks were carefully laid out, a ball of masa placed on it and then smashed flat. A dollop of meat and then wrap. A couple of cheese and veggie ones made just for fun. 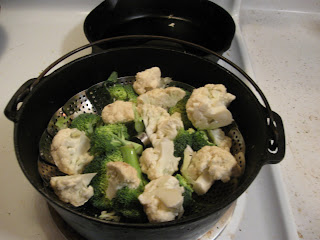 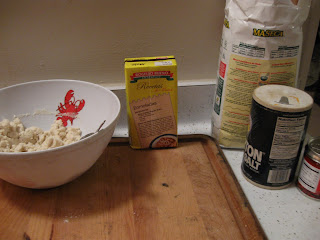 Now to cook. I knew they needed to cook because my co-workers had said ""Steam them until the dough is done". Very glad this was mentioned as it had never occurred to me the masa needed to cook....I used my Great Grandmothers cast iron bean pot with a steam plate in the bottom. The pot wasn't tall enough for them to stand uprights so I stuffed them in layers into the pot.
Voila! I had made tamales and they were delicious. And even better they were fun. 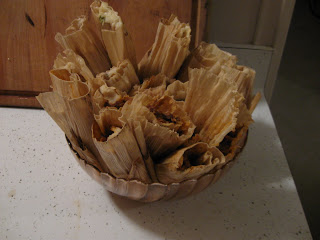 I was only released after a lady assured them that I would be invited to her house the next time she made tamales, so that I could make them "properly".

In the meantime, I may be able to tell good wine from mediocre, but a tamale is just a tamale! 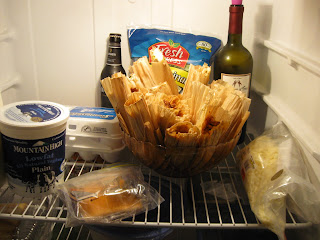