In Search of… The Perfect Cup of Coffee. 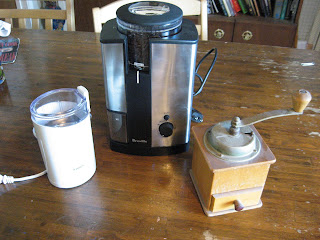 Grinders I have Loved


Some kids are born coffee drinkers. Some have to learn it. I think I was a born coffee drinker, but didn’t realize it until some time around the 5th grade. My friend and I were at a PTA meeting at the school, (big event of the month when you live in the country and go to a little K-8th country school) and she pointed to the big coffee urn, “Let’s get a cup of coffee!” No one told us we couldn’t, so we acted like it was no big deal and dispensed a cup. She loaded hers with cream and sugar. After trying it, that was when I realized I liked mine black.

My coffee consumption was never quite the same after I married a sailor. We had more coffee makers, coffee cups, Thermoses and other paraphernalia than I’d ever seen in one house. Coffee all morning, coffee in the afternoon, and after dinner coffee. With all this coffee, all that was bad or boring began to rear its ugly head. Namely, MJB and generic. After I struck that from my short list, I started trying to pay attention to what tasted best instead of what was the best price.

The problem was, once in a while, once in a great while, I would get a great cup of coffee. This was before Starbucks, Peets, and all those other little high quality coffee shops. Farmers was the usual restaurant brand. And sometimes, when that cup was made from extraordinarily fresh coffee and clean pure water, and you could taste what it was meant to be. You could shut your eyes and be climbing the mountain with Juan Valdez and his burro, picking only the ripest beans, it would feel like Christmas, the way it was meant to be, you had just discovered a new taste bud, which had finally woken up; in short, coffee that tasted as good as it smelled.

At first, I thought Folgers was pretty good. Then I found that Yuban was a little richer. then I discovered the little one pound cans of S&W.

One day I noticed what I had never seen in a grocery store: coffee beans. Bins of roasted coffee beans for sale. They were such a novelty, I didn’t want to run them through the store grinder, but take them home and see what I could do with them. Maybe, just maybe this was the key to good coffee. Fresh grind! I pulled out the little German made hand coffee grinder and ground what was probably its first batch of beans in its life. It’s former life as a shelf decoration was over! The grounds were very coarse, but smelled wonderful. For probably a year we ground away, making coffee from coffee beans.

When blade grinders hit the market, I was ready. So far I have gone through about 4 of them. Advantages: a fine grind, fairly convenient. Disadvantages: noisy, can heat up the grinds. There was always a routine in the daily grind. Measure out, cap it, plug it in, press the button, shake shake, SHAKE shake, slap, slap, shake shake, let go the button, turn upside down, SLAP SLAP, shake. Pull lid containing grinds off and dump into coffee filter.

One thing we only did in emergencies—use the supermarket grinder. Because somebody before you ground chocolate raspberry coffee. Even in the one that is off limits to flavored coffee. Trust me.

Getting tired of the grinding routine, I’ve done a little research on grinders and discovered that the grinder to have is a conical burr grinder. Not just a burr grinder, but a CONICAL burr grinder (translate: expensive). Well lo and behold, the gourmet kitchen store in town was going out of business and had their stock at 40 percent off. On the table was a Breville conical burr grinder, for about $50. One left. My husband snatched it up.

We’ve been using it for several weeks now, and I love it! It is quiet, precise, grinds out the perfect measure and only requires a little tap tap to cut the static electricity from sending the grounds flying when you open the lid.

So I’m that much closer to the perfect cup of coffee. But I’ve been thinking lately, how much better could it be if I roasted my own beans?
Posted by Carolyn at 1:29 PM