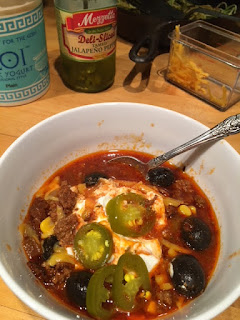 Enchilada Soup was an experiment that turned out quite well indeed! It is fun to think of the things we like to eat, and then figure out how to make it a soup.

I used a pound and a half of ground chuck, browned in a cast iron skillet. In the meantime, I pulled out one of my 1/2 cup jars of chile puree and a plop of tomato paste from the freezer, (see my previous soup posts for that info) and dropped it into a cup of simmering chicken broth (because it was leftover in my 'fridge). I spooned out a quarter cup of leftover canned corn into the mix also. Then I dumped in the browned meat and let it simmer and heat.

I cut up a half of a yellow onion and lightly browned it in the remaining traces of grease from cooking the beef (If your beef is more fatty, you'll want to drain most of the grease off). When it was done, I stirred in a couple of large, chopped garlic cloves and cooked until they were fragrant. (over browning garlic makes it bitter). Then into the soup pot they went, along with a generous pinch of dried oregano. The skillet was still a little bit wet with grease and onion juice. I stirred in about a scant tablespoon of ground cumin and toasted it until it was fragrant but not browned. I slightly deglazed the pan with some water and dumped it into the soup. A half a can of drained, pitted black olives followed that.

Now it was just fine-tuning it with some salt, a splash of balsamic vinegar, and some more hot water.

I served it with some shredded cheddar cheese, a scoop of our version of sour cream--whole milk greek yogurt, and tamed jalapeño nacho slices. It was incredibly delicious, and healthful!

I did serve a couple of sides, a fresh cucumber and onion relish, and "squaghetti," spiralized zucchini seared briefly in the still-spiced skillet with a little more oil, adding paprika and garlic powder also.