Should I Get a Sous Vide Machine? 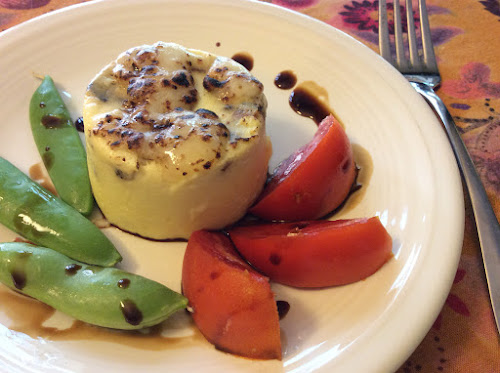 Well, I think the answer is yes. Because according to my research, it will mash wort at a perfect temperature. And also cook things.

I had heard about Starbucks Sous Vide Egg Bites, that they were fantastic. And expensive, like all Starbucks food. Since I already had a sous vide machine on my mind, from a running thread on my Brew-in-a-Bag Facebook group, I decided to see whether they could be as good as all that. I decided to set up a sous vide situation on my stovetop with a large stockpot, lid, instant-read thermometer, and 4 little half-cup canning jars.

I hunted down a copy cat recipe online (http://www.copykat.com/2017/02/20/starbucks-sous-vide-egg-bites-bacon-gruyere/). This one seemed to have the most positive comments on the finished product. The ingredients are pretty basic to a quiche-like dish. It called for a tablespoon of cottage cheese for each egg. I used four. The cottage cheese is to help lighten the egg and keep it from being too dense when it's cooked. It called for a quarter cup each of shredded Gruyere and Monterey Jack cheeses. But since I decided to use what I had, that ended up being an Italian blend of cheeses like mozzarella, Parmesan, Asiago, etc. You are supposed to press a piece of thin crispy bacon at the bottom of each jar, but since I only had thick-sliced, after I fried it, I snipped it into little pieces with kitchen shears. Just a little salt, and then it was time to blend. The blender is an important part of making the finished egg bites smooth and creamy. So I blended the heck out of my egg mixture.

A squirt of pan spray went into each jar, and a big pinch of the bacon snippings. Each jar got just enough mixture to go to the fill line, and then the lids went on, only lightly tightened. In the meantime I had heated my stockpot full of water to just a little over 167 degrees, which was my target. A couple crocheted pot holders went into the bottom, and I set the jars on them. The water covered my jars by an inch or so. Now came the hard part, keeping the water temperature as stable as possible for 35 minutes.

It wasn't easy. My temperature started out low because of the heat loss by sticking the jars in. I was confused that the temperature wasn't rising in spite of me bumping up the heat on the electric burner. Until I realized I was turning the wrong knob. I didn't want to put too much heat at the bottom of the jars, so I tried to raise it very gently. Every five minutes or so I would give the water a little swirl and then slap the lid back down to save the heat. I gave them another ten minutes to make up for the low temp at the beginning. Finally I called them done.

I slid my egg bites out of their jars. Perfect! Not tough and rubbery, not runny, but tender and smooth. I packaged three of them into the fridge, but decided I needed to eat one for my research. I wished I hadn't had that second piece of pizza, but this second supper was for a good cause. I sprinkled some cheese on top, and then used my little torch to melt it and give it some pretty brown touches. It was really, really good!

The picture I used here is actually one I reheated up this morning and had for brunch. I wanted to be sure not to overcook it, so I decided to warm it by slipping it into a ziplock sandwich baggie and dropping it into some almost simmering water for a few minutes. It was enough to bring it to a just-right temperature. After torching the cheese sprinkled on top, I dressed the plate with fresh tomatoes, sugar snap peas, and sweet fig balsamic vinegar. Superb!

Posted with Blogsy
Posted by Carolyn at 9:48 PM